Volkswagen has now finally drawn the curtain on the seventh-generation Golf with the introduction of their latest special edition offering, the GTI TCR.

With the eighth-generation Golf set to be launched in South Africa later this year, the German brand gave the world a last dosage of everyone's favourite hot hatch.

Since it first made its introduction seven years ago, the Golf 7 range has sold around 40 128 units locally, and of those, 13 230 were GTIs. One can expect that number to increase by at least 300 units - the number of TCR models destined for SA.

There is a strong possibility that the limited edition TCR will sell out as quickly as it arrives, and few South Africans will turn down the offer to own one.

It will retail for R669 000, but it's unlikely that true GTI fans will give a hoot about it. 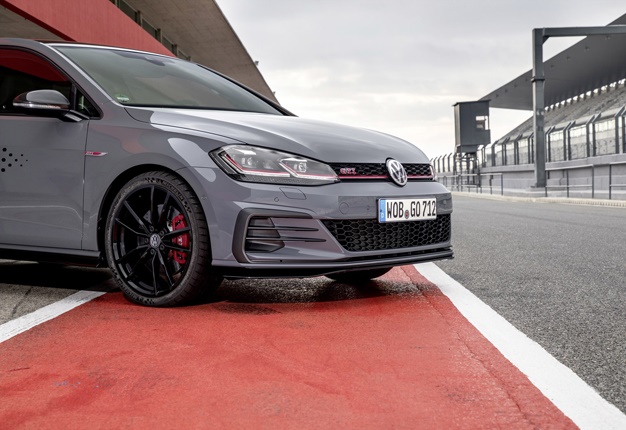 Considering that the Clubsport S was priced at almost R1.0-million, people still forked out the cash. And remember, this was for a GTI. These buyers could easily have spent that money on a Porsche or something along those lines. That in itself speaks volumes of just how loved the hatchback is in SA.

As VW has proven with other models in their range, everything sells, and it is for this reason that they keep introducing new models to the masses. The GTI is a bread and butter fixture, so it makes sense to keep the conveyor belt moving.

So why not choose a Golf R; seeing as though it is only about R30 000 more expensive and faster with 228kW?

Well, people won't care that it's slower than the Golf R because, besides the 213kW and 380Nm, you're getting much more exclusivity. Special bits like the 19-inch wheels, TCR spoiler, rear diffuser, and TCR livery lets everyone know that it is a TCR, straight from its creator.

Besides, the roads are already filled with R-line models that beg the question: do you really want to drive something that many people have seen before? Volkswagen has perfected the art of improving each GTI over the years, and this has culminated in engineers setting the bar higher each time. Hyundai has also entered the hot hatch fray with the i30N, but their performance range of cars locally is relatively unproven, and those who know VW will stick to what they know. For the sake of comparison, the Golf 7.5 R sells for R695 000, the i30N R680 000, while an Audi S3 Sportback sets you back around R700 000. You can even throw in the Honda Civic Type R at R703 200.

Not only is it the cheapest out of the bunch, but you get to own a one-off model that will silently provoke the ire of the green monster inside each of us.

Bringing an exclusive model such as the TCR to market in limited numbers makes sense. Soon the Mk8 GTI and R will be the most-talked-about, but owning something of which only 300 were made, puts it down as a collector's item.

The economy might not be in the healthiest of states at present, but that won't deter people from placing their orders, which they can do from this month. There's no stopping the GTI juggernaut at present.

And for the foreseeable future, there probably won't be anything that can. 2020 Volkswagen Golf GTI TCR. Image: QuickPic
We live in a world where facts and fiction get blurred
In times of uncertainty you need journalism you can trust. For 14 free days, you can have access to a world of in-depth analyses, investigative journalism, top opinions and a range of features. Journalism strengthens democracy. Invest in the future today. Thereafter you will be billed R75 per month. You can cancel anytime and if you cancel within 14 days you won't be billed.
Subscribe to News24
Related Links
It's finally here! Pricing for VW's limited edition 213kW Golf GTI TCR announced
Volkswagen’s modus operandi - All the new passenger vehicles scheduled for SA in 2020
Next on Wheels24
REVIEW | Buy it. Keep it. 2022 Mitsubishi ASX offers loads of value for money