Love it or hate it, Lotus Cars is moving into the world of Sport Utility Vehicles (SUVs). Yes, the car company that specialises in lightweight sportscars is pulling a "Porsche". Like the German brand that had to launch an SUV, the Cayenne, to survive and grow, Lotus Cars follows this path as it looks to increase its market share worldwide.

According to the carmaker, the all-new Eletre is the first SUV to spark the introduction of several four-door and five-door models for Lotus Cars. A pair of electric motors power it. It is sculpted with precision for reduced drag, and inside, it looks like a car that fits the next instalment of Bladerunner. Here's everything we know about the new Eletre, the vehicle that might look a little bit like a Lamborghini Urus, with the ambitions of the Porsche Cayenne, but powered by electrons. Matt Windle, Managing Director for Lotus Cars, says: "The Eletre is a bold and revolutionary new car, delivering on our commitment to move Lotus into completely new automotive segments as we widen our global appeal and accessibility. This is a significant point in our history and a clear signal of our ongoing desire to transform our business. It is a true Lotus, and we're confident it will delight performance car customers and offer a distinct alternative to the segment's established players. The Eletre has the soul of a Lotus and the usability of an SUV. Alongside the Emira sports car, this is the perfect two-car garage from Lotus." Eletre is the first in a new range of premium lifestyle performance electric vehicles built at an all-new state-of-the-art production facility in Wuhan, China. Lotus Cars notes that the car has been 'born British, but raised globally', with design led by the United Kingdom, supported by collaborative work with teams in China, Sweden and Germany. The vehicle's overall exterior and interior design have been led by an international team based at the Lotus Tech Creative Centre (LTCC) in Warwickshire, UK. Lotus Cars is owned by Geely, which also owns Volvo Cars, but Windle notes that the Eletre shares nothing with other models - it's all-new. Still built for the drivers - but different

A flat 'skateboard-style' battery pack and electric motors are positioned close to the ground to create a low centre of gravity to deliver on the core Lotus commitment of outstanding dynamic performance.

The manufacturer explains that the high energy density of the battery pack provides the best possible balance of performance and driving range. There are two electric motors, one driving the front wheels and another driving the rear wheels. A three-in-one electric drive system integrates each motor with a controller and reducer, an efficient design that makes the unit smaller and lighter. The Eletre offers permanent all-wheel drive, boasts a battery capacity of 100kWh, and punches out 447kW. In markets like China, which offer 350kW DC chargers, you can achieve 400km of range in just 20 minutes. The car's target maximum WLTP driving range is 600km. It also comes with the ability to accept 22kW AC charging to keep it topped up at home overnight while you sleep.

In terms of performance, expect it to gallop from a standstill to 100km/h in 3 seconds and on to a top speed of 260km/h. 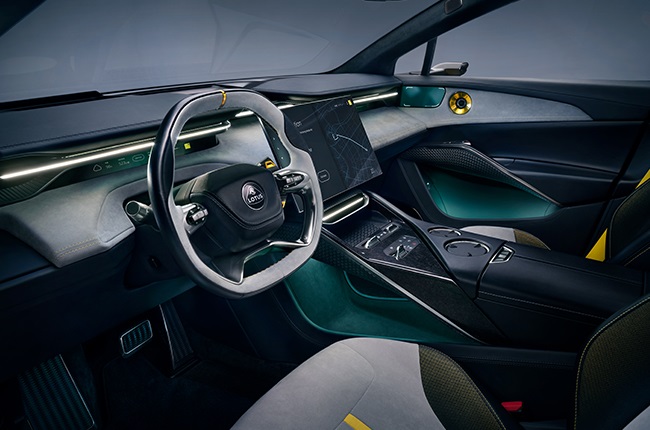 The Eletre is said to offer exceptional driving dynamics, outstanding comfort and genuine Lotus performance. The car comes with a five-link suspension system at the rear for optimised ride and handling, while standard equipment includes air-ride damping and Continuous Damping Control (CDC). Active ride height, active rear-axle steering, an active anti-roll bar and torque vectoring via braking are all available to help drivers extract the most thrilling drive in an SUV. Yes, it's tech-laden compared to Lotus Cars we have grown to love, but it's necessary if the company wants to remain competitive in the premium segment.

Additional technology touchpoints that stood out for us at the vehicle's unveiling included Advanced Driver Assistance Systems (ADAS), designed to be futureproof so that Lotus Cars can enable new features via Over-the-Air (OTA) updates. Several driving assistance systems leverage a revolutionary LIDAR system with deployable sensors hidden to reduce drag when not required. 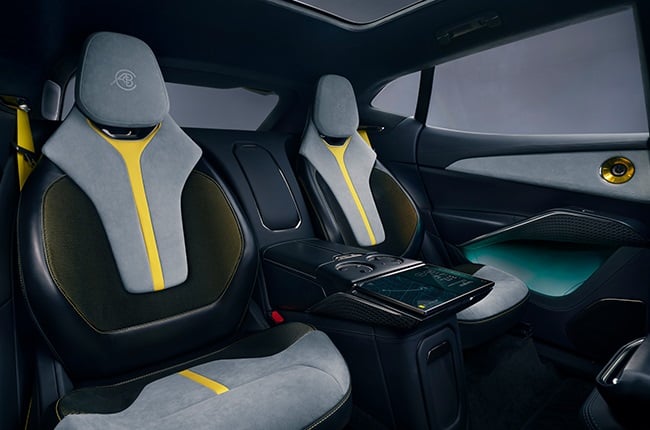 The LIDAR system means the Eletre supports end-to-end autonomous driving technology and is futureproofed for further development, achievable because of the hardware that's already integrated. Additional capability can be added via OTA software updates as and when it is allowed by local market regulation. Of course, the driver's cockpit is insanely advanced with digital instrumentation, touchscreens, and voice control. Most of the vehicle's interior is constructed using recycled carbon fibre to reduce its environmental impact. But, the most remarkable tech feature, if a bit gimmicky, to be honest, has to be the colour-changing LED rear lamps that play a colourful greeting and goodbye when you unlock and lock the vehicle.

Finally, the car comes with a KEF Premium audio system as standard. Still, you can upgrade to a more powerful KEF Reference setup with 23 speakers, amplifiers and subwoofers for maximum window-rattling ability. The optional audio system pumps out 2 160 watts. It's under consideration for South Africa

Later this year, Lotus Cars will produce the first customer-order Eletre models in China. The vehicles will roll out in that market first before UK-based Lotus fanatics will be able to get their hands on theirs. For us in sunny South Africa, we'll have to wait until the end of 2023, maybe 2024 for the Eletre to arrive.

Daytona Group, the importer of Lotus Cars in SA, has confirmed that the Eletre will be launched in SA in 2024 - but this all depends on global demand and the impact of the semiconductor chip crisis. They wouldn't disclose estimated pricing, as it's way too early for that, but according to our Lotus Cars contact in the UK, it's going on sale there for around R2 million. That's what we currently pay for cars like the Jaguar I-Pace, for reference. If you must have a new Lotus in your garage this year, you can still go for the two-seater Emira that will land here by the fourth quarter of 2022 with an estimated price tag of around R2 million. Daytona Group suggests you register your interest with them for Emira and the Eletre to avoid disappointment.

We're glad Lotus Cars is moving in the SUV direction, and although this Eletre might not have a screaming twin-turbo V8, it shows us that the future is exceptionally bright for high-performance SUVs. We won't be surprised if the next generation Lamborghini Urus goes all-electric using Rimac technology. For now, if you're in any high-performance SUV and you see an Eletre in your rearview mirror, we think you should move over and let the new King of Hyper SUVs through.

Do you think the Lotus Eletre signals a new age for high-performance SUVs? What are your thoughts on the company building an SUV for the first time? Will you trade your high-performance V8 SUV in for something like this car? Let us know your feelings in the comments section below.