Wheels24 columnist Alexander Parker tests the new Alfa Romeo Giuliain Cape Town. Does this latest Alfa have what to takes to go up against the German trio in SA?

Cape Town - To be honest, I dread reviewing Alfa Romeos. There’s altogether too much at play and very little of it has anything to do with the car. Too often it descends into farcical navel-gazing and an absurd soliloquy on some middle-aged petristential crisis.

I hate the fact that petrolheads will loathe you for the rest of eternity if you don’t lavish praise upon every aspect of the car as though it were designed by Michelangelo’s angels themselves. I hate the fact that everyone whose grandmother once met somebody who’s been to Italy will call out the Cosa Nostra (Sea Point chapter) the moment you suggest there’s something imperfect about the car.

And, worse of all, I hate the fact that I will spend years wringing my hands about this review, because while I am not Italian, nobody wants to love a new Alfa any more than I do. That’s the worst bit; sitting here sorting fact from my own desperate desire for this to be a great car. To car people, a new Alfa matters. This isn’t the professional summing up of a new well-priced family crossover from a sensible Japanese company. This is new Alfa. It matters to people like me a great deal, and so I approached a new grey Giulia 2.0 petrol more than a little gingerly. Please, for pete's sake, don’t be crap.

Well, it’s not. But then the company it likes to keep isn’t crap either. This car wants to be taken seriously in a showdown with the BMW 3 Series, the Mercedes C-Class, the Audi A4, the Lexus IS and the Jaguar XE. And that means you can blather on as much as you like about flair and passion, but this thing needs to be engineered properly and be really well nailed together.

It looks pretty good, though, doesn’t? Indeed so, but there are two problems here. One is that the competition is hardly like Tracey Emin’s bed to look at, and the second is that the car it replaces, the 159, is the prettier of the two. And it’s not cool to have people saying that yes, indeed, ‘young Luigi is a handsome fella but have you seen his dad?’

Now, something on the chassis. This, too, is important. An all-new rear-drive chassis is what we have here and I think it might be the best thing about this car. It’s absolutely great, really and genuinely as good or so close I can’t tell without driving everything back-to-back, as the BMW and the Jag, and that means dynamically it’s playing with the best in the business. 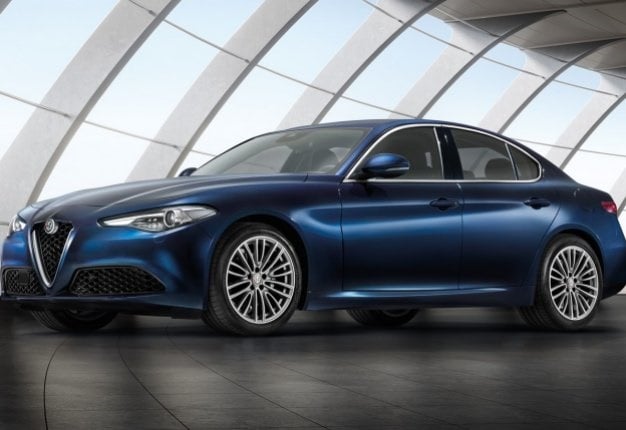 The car I drove was wearing 17" wheels with a luxuriant aspect ratio of 55. That did make it a mite flubbery, to coin a term, when cornering hard but there’s no hiding the quality of engineering here.

Abundant rubber also makes for a fluid and quiet ride where more sternly shod competitors might become unwieldy There’s a bit of wind noise at freeway speeds but otherwise the Giulia makes for a truly luxury car experience on the freeway.

The steering – disconcertingly light and utterly devoid of feedback at low speeds – firms up properly under pressure and when in the “dynamic” setting. Front-end grip is solid and rear drive is always a beautiful thing.

I drove the new two-litre all-aluminium engine. It’s light and revs quickly and produces 147kW – more than the BMW, Jaguar, Audi and Mercedes competitors. That’s a good thing. It’s quick, too, seeing off 100km/h in just a moment over 6.5 seconds.

Then, the interior. It’s unlike any Alfa I’ve ever seen. It feels well-made and solid. It’s not quite an Audi or a Mercedes in there but it makes the 3 Series sweat. The infotainment screen is nicely integrated into a dashboard of generally quality-feeling plastics. A pity, then, that it’s clumsy to use and the rotary dial feels so flimsy. Perhaps a model specced with the satnav system is better.
The driving position could do with being less Italian and more German. I could have used more support for my thighs and less of a sit-up-and-beg style, but that’s Alfas for you.

Now for the bad news: in town I found the throttle oversensitive and the gearbox – such a sweet-shifting affair on a fast back-road or a freeway – irritatingly unpredictable and indecisive. Add that to maddeningly grabby, binary brakes and it’s a difficult car to drive smoothly in town. I found this tiring and irritating after a long day at the office, the exact time your expensive luxury sedan is supposed to make you feel cosseted. So that’s not good at all. The trouble with Alfas...

And herein lies the problem. In their hunt for (mainly American) new customers for the brand, which is desperately needs if it is to survive, Alfa have produced a very good car. It’s genuinely excellent to drive fast and has a ride and handling balance at least as good as the best of the rest. But to me it’s not thrilling enough to look at, or special enough to sit in, or so meaningfully better to drive for me to live with how annoying it is in town.

And that’s such a pity. I took the Giulia for a wonderful weekend in the Boland with the kids. It was great. The boot is big and the rear legroom is comparable to the best. On the freeway it sailed along comfortably. But back in town I couldn’t wait to be out of it.

The new Giulia is a different and interesting car. It’s not a BMW or an Audi or a Benz and that alone is reason enough for many people to have a look at one. It’s also very, very nice to drive when you’re in a hurry, and, for the committed petrol-head, everything else about the car is probably good enough.

But I can’t think I’d ever want one. And I absolutely hated writing that. I hate the fact that I’d probably go for a 320i or a C200. I hate that I’m tired after work and worried about shaking up the kids with stupid jerky brakes. Does this mean I’m not a proper petrolhead?
You see. This is all about me, not the car. I did warn you.

We live in a world where facts and fiction get blurred
In times of uncertainty you need journalism you can trust. For only R75 per month, you have access to a world of in-depth analyses, investigative journalism, top opinions and a range of features. Journalism strengthens democracy. Invest in the future today.
Subscribe to News24
Related Links
Alfa Romeo Guilia Quadrifoglio vs BMW M3 - Which is faster?
Next on Wheels24
Volvo and Google team up for new infotainment system in upcoming XC60