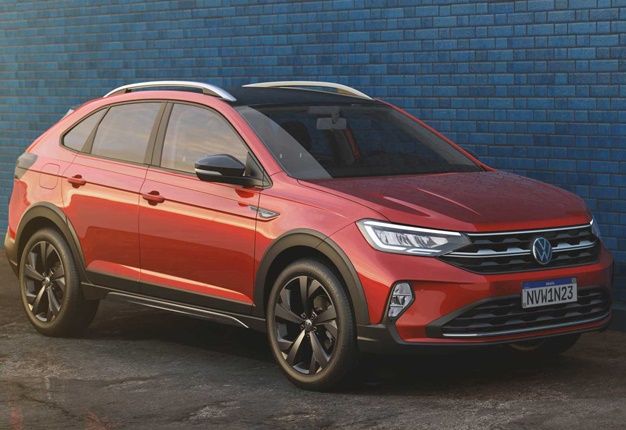 • VW has another compact crossover based on the Polo chassis

• The Nivus is larger than the popular T-Cross

If your product preference is between a Cross Polo and T-Cross, VW has revealed an exciting new solution in the middle of those two.

The German brand's latest crossover is its Nivus, which rides on the current VW Polo MQB A0 platform.

For all intents and purpose, this Nivus is the Cross Polo reborn. It combines the sloping roofline design of a crossover-coupe, with enhanced stance and plastic cladding, on the lower bodywork panels.

The overall design is a striking and a tidily executed evolution of the current Polo platform, into yet another crossover-type vehicle for VW.

How big is it?

Although the Nivus, T-Cross, and Polo are all structured on the same vehicle architecture, the newcomer is larger. Measuring 4.26m bumper-to-bumper, the Nivus is 67mm longer than T-Cross and 206mm larger than Polo. Exterior size aside, the Nivus is crucially also more spacious inside. Unlike many other crossovers, which don't necessarily offer load capacity benefits over their hatchback siblings, the Nivus shows that VW's product planners applied market awareness with this new model.

What do you think of the VW Nivus? Do you think it will do well here in South Africa? Please email us.

Below the Nivus tailgate, there is 415-litres of luggage space, which is impressive for a vehicle of its size. More to the point, that luggage capacity is 42-litres greater than a T-Cross and a whole 115-litres better than what you'd find in the back of a Polo hatchback. Beneath the Nivus bonnet is VW's familiar 1-litre three-cylinder petrol engine. With the benefit of turbocharging, it boosts 85kW and 200Nm, which should be quite adequate for a vehicle of the new VW crossover's size.

Whereas most of VW's 1-litre vehicles have the option of a manual transmission, the Nivus is only available with a six-speed automatic. Considering the driving reality for most crossover configuration vehicle owners, which is urban commuting, the convenience of an automatic transmission in traffic, justifies VW's product planning decision, with regards to the drivetrain.

Providing the infotainment and Smartphone synching for Nivus is the 'VW Play' system. Developed primarily for emerging markets, this is a simplified version of VW's more sophisticated infotainment offerings but still offers both Apple CarPlay and Android Auto convergence. There is also a 10G of residual system memory and the ability to launch and operate a variety of VW apps, many of which assist with proximity location functions when you are seeking accommodation, fuel, food or services. An interesting feature the VW Play infotainment system is the absence of physical buttons and dials. All functions are touch.

VW will initially be launching the Nivus in South America, but its specification and configuration would make for an ideal South African crossover too. Local buying trends have favoured hatchback-type crossovers, with some gravel travel ability, of late. VW could possibly find a market for Nivus if it was priced competitively below T-Cross in South Africa.

We live in a world where facts and fiction get blurred
In times of uncertainty you need journalism you can trust. For only R75 per month, you have access to a world of in-depth analyses, investigative journalism, top opinions and a range of features. Journalism strengthens democracy. Invest in the future today.
Subscribe to News24
Related Links
Dear Volkswagen, please bring back the Jetta! Love, SA readers
VW SA puts forth major investment in fight against Covid-19, turns PE plant into medical facility
Next on Wheels24
NEW MODEL | Stunning 2022 Kia Sorento has launched in SA - prices and specs here