• Toyota launched hybrid models of two of its most popular vehicles.

• At R419 900, the Corolla Hybrid is the most affordable hybrid in South Africa.

Toyota South Africa expanded its hybrid line-up by introducing Corolla and Rav4 models with these powertrains. For Toyota, this technology debuted in 1997 with the erstwhile Prius and has been a part of its technical prowess across its own and Lexus brands.

With the world fast-adopting green technologies and embracing electric mobility, Toyota realises that the switch to this realisation needs a gradual process rather than merely forcing it onto car buyers. And as it gears towards being completely carbon neutral by 2050, product offerings like the Corolla and Rav4 hybrid models aim to make this 30-years-away goal a reality.

To this end, Toyota South Africa has an initial plan to roll out hybrid variants on most of Its mainstream model ranges. The big news will be introducing the locally-produced Corolla Cross (in petrol and hybrid) from November this year. This, however, is just the start of the electrification programme - the full spectrum of NEVs (New Energy Vehicles) will be launched when there is sufficient demand and when the infrastructure can support their introduction. 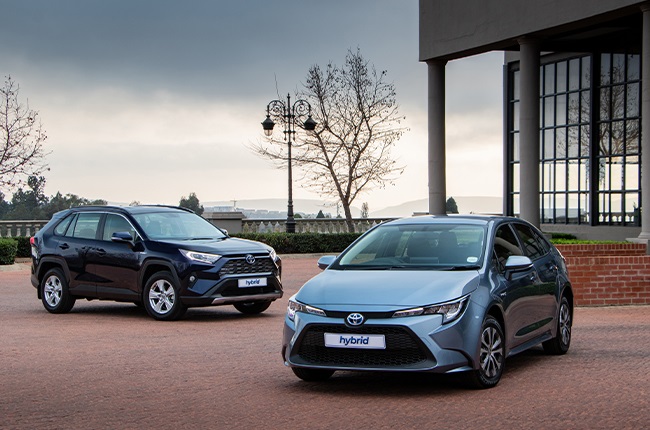 The Corolla Hybrid is powered by a naturally aspirated 1.8-litre petrol engine shared with the Prius. With the drivetrain's aim is to be fuel-efficient, Toyota claims a fuel return of 3.5-litres/100km, which should see the car cover a theoretical range of over 1 200km with its 43-litre fuel tank fully fuelled.

With the petrol engine and electric motor combined, the total system output for the Corolla Hybrid comes in at 90kW and 142Nm. Though the electric is capable of producing 53kW/163Nm of additional power, the CVT (continuously variable transmission) is responsible for some power loss.

The Corolla Hybrid is based on the Corolla 1.8 XS model - the entry to the Corolla Sedan range. It is fitted with 15-inch alloy wheels and other standard equipment such as LED head and taillamps with Daytime Running Lights (DRL), keyless entry, power-adjustable and heated side mirrors, cruise control, climate control, a reverse camera, power windows all-round,  and three-spoke leather steering wheel with steering switches.

The Corolla XS CVT Hybrid retails for R419 900, making it the most affordable hybrid in South Africa. The Rav4 Hybrid is offered in a tweaked version of the GX trim, which, Toyota says, "strikes a balance between core convenience spec, value for money and luxury convenience." In standard trim, the 2.5-litre petrol engine offer 131kW and 121Nm, with the electric motor punching out 88kW and 202Nm. Of course, the CVT gearbox negates some of that power, bringing the total system output to 160kW.

The Rav4 Hybrid retails for R555 300. It and the Corolla Hybrid come standard with a six-services or 90 000km service plan and Toyota's three-year or 100 000km warranty. Additional peace of mind comes in the form of an eight-year or 195 000km Hybrid battery warranty. 2021 Toyota Rav4 2.5 Hybrid GX
Motorpress
We live in a world where facts and fiction get blurred
In times of uncertainty you need journalism you can trust. For only R75 per month, you have access to a world of in-depth analyses, investigative journalism, top opinions and a range of features. Journalism strengthens democracy. Invest in the future today.
Subscribe to News24
Next on Wheels24
All-new Range Rover is SA bound with thumping 390kW V8 engine headlining the show