More SUV choice for local buyers as Renault launches its new Kiger: we have SA pricing

• Priced from R199 900, the Kiger is powered by the same engine as the popular Kwid.

• The Kiger range is available with three trim levels.

The new Renault Kiger has officially been launched in South Africa, offering prospective customers an expanded choice in the Kwid family. The Kiger is the third model in the family, joining the aforementioned Kwid and sever-seat Triber.

Unveiled in the closing stages of 2020, the Kiger boasts a 2 500mm long wheelbase and 16-inch black diamond-cut alloy wheels. Ground clearance is a good 205mm, with the SUV-ness supported by the black wheel arches. Renault claims a boot space of 405 litres. 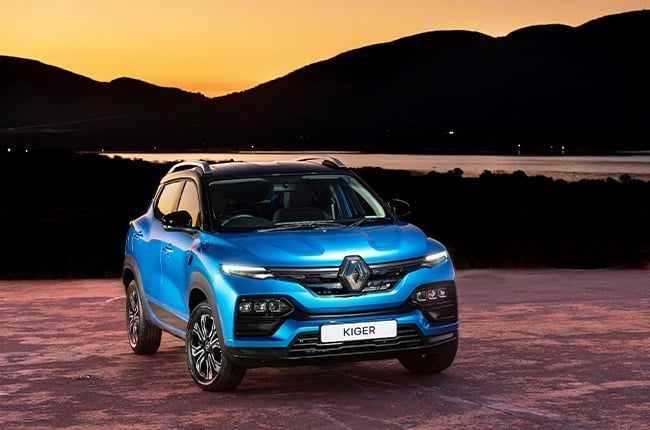 The Kiger boasts impressive readings to suggest that it can comfortably seat five passengers. According to Renault, there are 710mm of space between the front and rear seats, gifting second-row passengers 222mm and 1 413mm of leg- and elbow room, respectively. And while boot space should be adequate, it can be increased to 879L with the rear bench folded down.

The cabin is further bolstered by storage compartments totalling 29L. These include four 1.0-litre water bottle holders, 7.5L in the central armrest, and 10.5L in the glove compartment. The upper and lower glove box capacity totals 14.9L.

The higher centre console features an 8.0-inch floating touchscreen with wireless smartphone replication for Apple CarPlay and Android Auto. The multimedia system also allows users to select five permanent shortcuts for faster access to apps and features. Renault says that the system offers voice recognition through Apple CarPlay and Android Auto and Bluetooth connectivity that can pair up to five devices, a USB socket for faster charging, and a built-in MP4 video player. One engine in two states of tune power the Kiger range. In its naturally aspirated guise, the 1.0-litre three-cylinder engine produces 52kW and 96Nm, while power increases to 74kW and 160Nm in turbocharged trim. Renault claims a fuel return of 5.0-litres/100km for the turbocharged unit. Three gearboxes channel power to the front wheels, the first being a five-speed manual 'box that is available with both engine choices. Renault's AMT (automated manual transmission) is available on the naturally aspirated engine, while an X-Tronic CVT (continuously variable transmission) is used in conjunction with the turbocharged unit.

We live in a world where facts and fiction get blurred
In times of uncertainty you need journalism you can trust. For only R75 per month, you have access to a world of in-depth analyses, investigative journalism, top opinions and a range of features. Journalism strengthens democracy. Invest in the future today.
Subscribe to News24
Next on Wheels24
Get set to raise the roof: Mercedes-AMG SL coming soon (and it's now a four-seater)