New Bentley Mulsanne Speed: 'It’s not a pretty car and neither should it be'

Cape Town - In literature there is a device known as Pathetic Fallacy, which uses inanimate objects or weather to represent human emotion - you know, makes willows weep and daffodils dance and that kind of nonsense, all depending on the mood the writer is trying to convey.

It has crossed into film too, meaning sad scenes might be filmed in the rain, for example.

And that’s why, when I looked through the windscreen, I wasn’t sure that I trusted what I was seeing. On the face of it what I saw was a countryside so beautiful it was almost as breath-taking as the cold.

The hedges and the oaks and every blade of grass were effervescent with frost as a reluctant, weak sun crawled above the horizon.

A house in Clifton 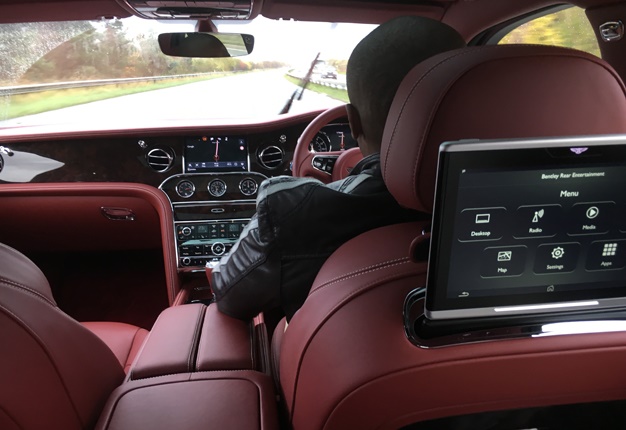 But it’s also possible that this was Pathetic Fallacy in reverse. Perhaps the world looked particularly pretty that morning because of where I was sitting. It is likely that a light-industrial park in Brits would look pretty good from the seat of a Bentley Mulsanne Speed and, so, inevitably the English countryside was charming that day.

We’d spent the morning at the company’s Crewe headquarters, watching in some astonishment as various craftsmen and women built these bespoke cars by hand. A group of people here were hand-stitching the steering wheels. Nearby, men with bright lights were inspecting cow hides for the smallest of imperfections. Elsewhere, a different crew was working on the company’s legendary wood veneers. Would you prefer Beach, Ash, Oak or Walnut?

EXPLAINED: Why the Bentley Bentayga costs nearly R4-million in SA

A quick walk around the museum reminded us of Bentley’s links to South Africa. It was Woolf Barnarto, son of the mining tycoon Barney Barnato, who teamed up with WO Bentley himself to forge the legend of the Bentley Boys and the brand’s particularly loud version of the roaring 20s, in which it won Le Mans on four occasions. Barney Barnarto sold his interest in the Kimberley mine to Cecil Rhodes (the sale that created De Beers), and that vast fortune was used by Barnarto Junior to, among other things, build the brand of Bentley.

Such an interest in history seems to sit rightly with a car like the Mulsanne Speed. In a time of downsizing engines, of crossover SUVs, electric drivetrains, autonomous drive, hybrid technology and lightweight materials, a V8-powered sedan car laden with Ash trim feels like something of a throwback.

But, heavens, what a car. It is simply huge, one of the biggest cars I’ve driven, and you’d reasonably expect the Mulsanne to be a wallowy old warship designed to cosset the plutocrat sitting in the back fiddling with his reclining ventilated seat, wifi zone and detachable screen, and lambswool rugs. Well, there’s plenty of that sort of thing. The Mulsanne cossets like few others, but with one difference.

For a car its size, it’s astonishingly pointable and quick. The figure that matters is 1100Nm, available in all its savagery at just 1700rpm. That’s the joy of the Mulsanne Speed’s 6.75-litre blown V8. It’s very, very quick but there’s no need to rev it, Jeeves. It’s all there at effortlessly low rpm.

The result is a magic carpet with a jet strapped to it, a uniquely peculiar and wonderful experience. The Mulsanne Speed - all of it - will hit 100km/h in under five seconds and will crack 300km/h where the law allows.

Turn a corner and, indeed, it’s an enormous thing, but the steering is perfectly communicative and accurate. If you’re in the mood, the Mulsanne can really get a move on. There’s poise in that chassis, the brakes are solidly strong and the eight-speed automatic short shifts into the torque band like a trooper.

And that’s critical. Bentleys need to be fast and fun. It’s at the heart of the brand. Inside it is the last word in luxury. Immaculate leather, wood and metal combine to ensure relaxation and comfort. The very latest tech is there, of course, but it’s not overwhelming.

There’s no fuss. The satnav is brilliant. The seats are spot on and everything you touch feels like someone spent a great deal of time thinking about it.

On a fast cruise to London the absence of road and wind noise was quite noticeable, and gave opportunity to wind up the 2200-Watt, 20-speaker Naim-for-Bentley stereo. It has to be heard to be believed, a near-biblical experience.

And then there’s the outside. It’s not a pretty car, to be honest, and neither should it be. Bentley hasn’t built a brand on the idea of pretty. It build big, heavy, luxurious, fast cars and they look suitably imposing while doing it. I rather like the look of it.

The new Mulsanne Speed is a niche offering. It’s POA, and we all know that what means, but it’s impossible not to love. It does too much too well, and with an endless supply of charm and torque. It’s an irresistible beast, really. Perhaps, indeed, it really was raining that day.

We live in a world where facts and fiction get blurred
In times of uncertainty you need journalism you can trust. For only R75 per month, you have access to a world of in-depth analyses, investigative journalism, top opinions and a range of features. Journalism strengthens democracy. Invest in the future today.
Subscribe to News24
Related Links
They sold how many?! SA's best-selling luxury SUVs
Next on Wheels24
More kit for your Hilux - SA's favourite bakkie now available with the 'GDV' touch