In a few weeks time, South Africans will celebrate Heritage Day (September 24). The aim is to celebrate our different cultures and traditions and in that process learn more about each other.

I recently had the opportunity to celebrate a different form of heritage with Nissan and its famed Skyline GT-R performance cars, which celebrate half a century of being the blank canvas for enthusiasts around the world.

There were several heritage cars at the event and I rode shotgun in a heavily-modified version of a silver R34 unit.

Millennials will know the R34 from the Gran Turismo video game from the early 2000s.

Built from 1999 to 2002, its 2.8-litre inline six-cylinder engine. The car I drove in made a gazilion kilowatts and all the pops and whistles launched me into motoring nirvana.

The 'launch' centred around the latest incarnation of the R35 GT-R, which has been around since 2012. For 2019, the 50th Anniversary Edition is available in three special colour combos (Bayside Blue, Pearl White and Super Silver) from the Japan GP series.

There's a large 50th Anniversary sticker on the back of the car, that to be honest is a little tacky but it's one very overt way of differentiating the special model. Inside, the cabin is festooned with 50th anniversary paraphernalia including the steering wheel and shift-knob trim, embossed seats, Alcantara headliner with blue stitching and alcantara-wrapped sun-visors.

Under the skin, the changes include new turbochargers, which help increase the engine's low rpm response due to an abradable seal, providing tighter clearances and a 5% increase in efficiency.

Tweaks to the exhaust manifolds, incorporates optimised turbo flange attachment points which allow for tuning, which is really what the GT-R is about. It's a performance car that can be tuned and pushed to the limit. Wilhelm Baard's tuned GT-R has won numerous titles at the Simola Hillclimb event. Nissan says its revised the 6-speed dual-clutch transmission with a refined "R mode," made for both road and track. On the road the shifts felt rapid and there was little to no delay when I tugged on the paddle shifts. It definitely makes the driving experience that much more intense when you can feel how quick the shifts are. 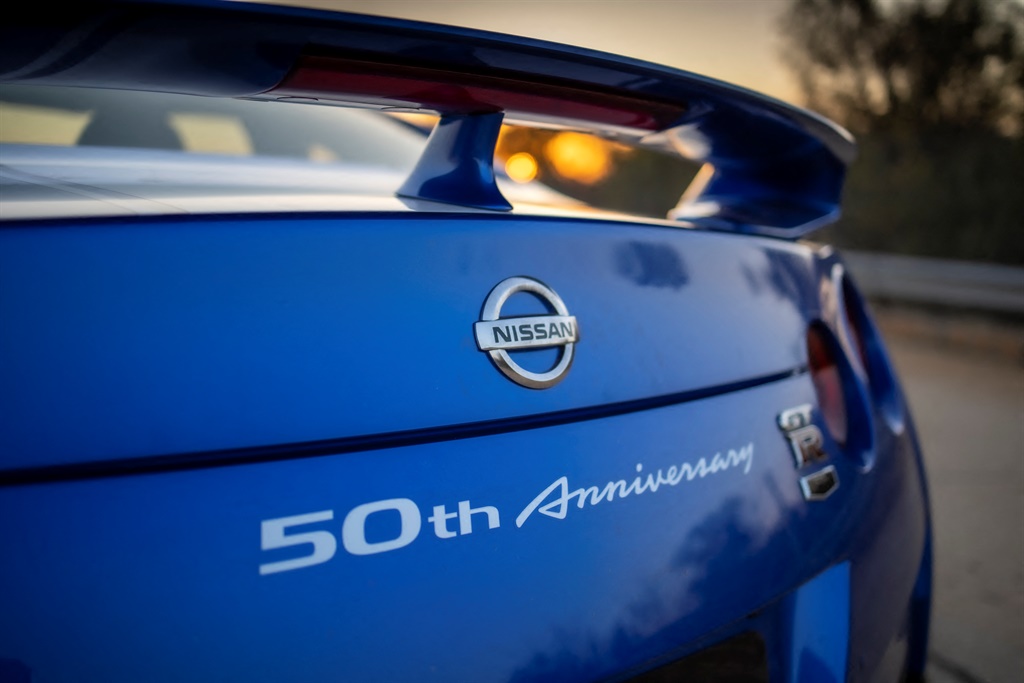 Admittedly my first time driving this special edition of the GT-R wasn't long enough to form a proper opinion. I tried a few launch control starts and what struck me is how brutal and mechanical they felt. By switching the engine, suspension settings to full 'R' mode.

Compared to newer high-performance cars, the GT-R doesn't feel that quick behind the wheel and the claimed sub 3-second 0-100km/h time feels as fake as a loan-shark's smile. Perhaps at the coast it would feel a lot faster.

But what the GT-R can do is incredibly well is corner at high speed. It defies physics with its ability to tackle a corner with supreme grip and unfailing confidence, but be warned... it takes commitment from the driver to know what this car is capable of around bends.

The steering initially felt subdued but weights up nicely once the revs climb and the speed increases.

So, while I didn't have as much time as I would've liked in the latest version of the GT-R, it shows how far modern performance cars have caught up and surpassed Godzilla.

I'd love some more time with it, if and when we get it on test. But the one take away from the launch and my first time driving a GT-R is how it carries speed through corners. I'm hoping it's not my last time driving this piece of automotive history.

We live in a world where facts and fiction get blurred
In times of uncertainty you need journalism you can trust. For only R75 per month, you have access to a world of in-depth analyses, investigative journalism, top opinions and a range of features. Journalism strengthens democracy. Invest in the future today.
Subscribe to News24
Next on Wheels24
The history of the Mercedes-Benz C-Class