REVIEW | Getting to grips with the entry-level 'Hatch', the cheapest Mini on sale

• Hatch was formerly known as Cooper

• Hatch the entry to Mini's family of cars

Entities such as Mr Bean and The Italian Job have one thing in common: a Mini Cooper. In the latter, the car was used to ensure the successful execution of a bank robbery. In Mr Bean, it was everyone's favourite simpleton's mode of transport.

The Mini became an icon, and it was a car that captured the imaginations of those in the market for something new.

A few decades later, and the Mini Cooper grew. It grew from the small, tin-ish runabout to a full-fledged range that sparked three more model ranges, all ranging in size and stature. But the Cooper, the car that started it all, remains the entry-point to the Mini family.

Recently, we had the opportunity to drive the entry-level automatic model in the Cooper range. Called the hatch and retailing for R408 726, it is not necessarily your average budget car, but there is merit in the car's market position.

Follow @Wheels24
When did you first take note of Mini and the cars in its portfolio? Email us. The Mini Hatch (let's call it the Cooper) is an interesting car because on the one end it must run with the rest of South Africa's carpool, while on the other it sorts of stands alone. Because of its history, the Cooper has carved niche out for itself and has gone on to become the original boutique car. It's a car not everyone will purchase, but those that do, do so because of how different it is.

This isn't your run-of-the-mill hatchback, but one that focuses on the aesthetics and the visuals. The 2020 Cooper retains plenty of the original car's traits and is instantly recognisable as a Mini.

REVIEW: Why the Mini Clubman is funky, fun and exhilarating

Inside, the big circular display takes centre stage on the dashboard, with dials and switches underneath it. It creates a retro feel that's blended with a touch of modernity. On the steering wheel, the audio controls and cruise control were brought on, but no paddle shifters to change gears with. In front of the driver, a second circular display relays all the necessary driving information. 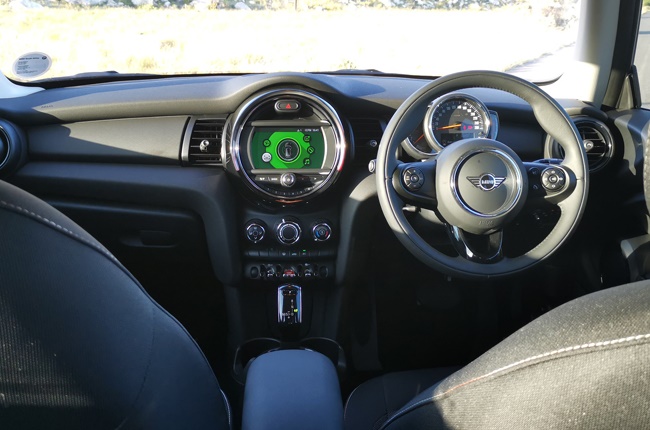 A turbocharged 1.5-litre petrol engine powers the Mini Cooper. The three-cylinder motor develops 75kW and 190Nm - with the latter available at a low 1350rpm, all the way to 3600rpm. Our test unit had just arrived in Cape Town, which meant that the engine wasn't properly driven in yet. With just a few hundred km on the odometer, the engine felt a bit tight. A restraint approach was taken, only because you don't to put the engine under too much stress so early in its life.

Still, the seven-speed automatic gearbox hooked the next gear without issue and ensured a comfortable from behind the steering wheel. The suspension setup, however, is a tad hard, especially for those who must squeeze into the back seat. While practicality is not this Mini's strongest suit, it makes up for it in other departments. It's good to look at, and is fun to drive. Oh, and manoeuvrability in tight spaces is definitely a plus.

Because of its unique, niche nature, a select few will opt for this car, while the more sensible choices would be Mini's other offerings, i.e. Clubman and Countryman. But despite all of it, if you want to stand out and make a statement, the Mini Hatch/Cooper can fill those needs. It also is the more affordable model in the range, making it accessible to a wider market. 2020 Mini Hatch One 3-door auto. (Wheels24 / Charlen Raymond)
We live in a world where facts and fiction get blurred
In times of uncertainty you need journalism you can trust. For 14 free days, you can have access to a world of in-depth analyses, investigative journalism, top opinions and a range of features. Journalism strengthens democracy. Invest in the future today. Thereafter you will be billed R75 per month. You can cancel anytime and if you cancel within 14 days you won't be billed.
Subscribe to News24
Related Links
REVIEW | Why the Mini Clubman is funky, fun and exhilarating
Open-letter to all Moms: If I had the means, I'd buy you one of these sub-R700k convertibles
Next on Wheels24
What it will cost to fill SA's most popular cars once the new fuel hike cripples our budgets