• The Mercedes-AMG A45 S is powered by the world's most powerful production 2.0-litre turbocharged engine.

• It was launched towards the end of 2020 in South Africa.

The relentless pursuit of more power is no more prevalent than in the hot hatch realm.

Cars like the Volkswagen Golf R32 and Audi S3 took the power war to another level with outputs north of 180kW in the mid-2000s.

Since then, things have moved very quickly. Hardcore versions of hot hatch models is a dime a dozen as carmakers quickly capitalised on performance car enthusiasts who wanted more power in stock-form.

Cars such as the Ford Focus RS launched in 2009. The front-wheel-drive super hatch drew its power from a 2.5-litre turbocharged Duratec engine with 224kW and 440Nm. At the time, it produced more torque than the BMW E46 M3.

A decade on from the RS I experienced the Mercedes-AMG A45 S at its international launch in Madrid, Spain.

Months before the launch, the German carmaker's new second-generation high-performance hatch made headlines.

In S form, it sports the world's most potent 2.0-litre turbocharged production engine. The quoted power output is 310kW and 500Nm.

That's 30kW and 25Nm more than the previous iteration. Like its predecessor, the latest model sends power to all four wheels and uses an eight-speed twin-clutch gearbox.

At the launch, we spent most of the time on the smooth Jarama race circuit. With the A45 S finally on home soil, we got to live with it for a few days and see how it responds to normal driving conditions.

Over the top doesn't even begin to describe the exterior of Merc's hardcore hatch.

A colossal wing sits on the rear, with a rear diffuser that houses four exhaust tips. It sits so close to the ground I swear I grazed a few 'cats eyes'.

The front has huge air dams and winglets to channel air more swiftly passed the front of the car. It looks the damn business.

The M139 engine is a twin-scroll unit hiked up to 2.1 bar and features two-stage piezo injectors.

The motor suffers from a fair bit of lag before the power kicks in. The power delivery can be described as pulling an elastic band and then releasing it very quickly.

A rotary switch on the steering offers the choice between several drive modes, with Race the most extreme. The exhaust flaps open to emit pops and bangs. It's a lively engine that certainly has loads of character. 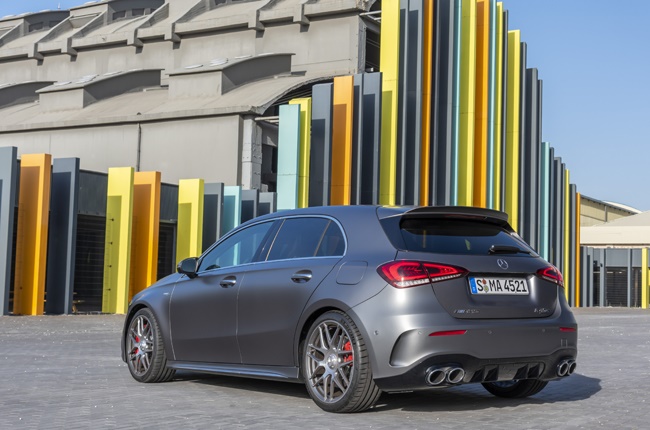 I took the A45 S on my standard set of twisty asphalt and was impressed at its overall grip and cornering ability.

The steering doesn't have a very natural feel about it, and much of the feel is lost between what the tyres are doing and what I feel from the wheel.

The ride is also too harsh due to the 19-inch wheels ,and the standard sports suspension offers a very firm ride even in 'comfort' mode.

The A45 S' qualities are there to be seen and heard. The exterior is sublime and captures the car's crazy personality with functional styling that turns heads.

The engine's power is impressive ,and perhaps the 'slingshot' effect from the power delivery is part of its character. It suffers from a harsh ride and an interior that might not age as well as its competitors.

But the speed, noise and grip from the four-wheel-drive system make the A45 S a weapon on the road.

We live in a world where facts and fiction get blurred
In times of uncertainty you need journalism you can trust. For only R75 per month, you have access to a world of in-depth analyses, investigative journalism, top opinions and a range of features. Journalism strengthens democracy. Invest in the future today.
Subscribe to News24
Related Links
DRIVEN | 2019 Mercedes-AMG A45 S
GALLERY: 2019 Mercedes AMG A45S
Blasphemy or reality: 2022 Mercedes-AMG C63 ditches V8 for A45's 310kW 2.0-litre engine
Next on Wheels24
Mercedes-AMG's potent 320kW GLE 53 SUV duo finally touch down in South Africa