• The sports sedan is powered by a 375kW petrol engine.

• The car sends all of its power to the rear wheels.

When one thinks of the BMW M3, images of brilliance and spectacular driving dynamics come to the fore. You recall a car revered for its abilities and prowess, and that demands respect anywhere you should drive it. Sports cars like Audi's RS4 and Mercedes-AMG's C63 S are measured against it, but they tend to, somehow, fall short of what the M3 has to offer.

These are characteristics of the M3 engraved in the hearts and minds of thousands of petrol heads worldwide, which is why it is the benchmark car for any sports car in any sector of the sports car realm.

The ingredients to the success recipe are simple: rear-wheel drive, six-cylinder engine (bar the E92's 4.0-litre V8), and a gearbox that channels that power to the road. Easy. And it works. But for the new G80 M3, BMW altered the recipe ever so slightly. Has this decision affected the standard-bearer in any way, though?

When @tyronepaulsen is so taken by the new @BMW_SA #M3Competition, he just couldn't help himself putting a little something together. pic.twitter.com/oRf5zsOFLn

When images of the new M3 and its M4 twin first began making the rounds, the motoring public had many things to say about the oversized grille. "It's too this" and "it's too that" was at the order of the day, but that was not what the conversation should have been about it. While aesthetics play a major role in how a car is perceived, with an M3 the proof is in the pudding. How it tastes - or in this case, how it drives.

For the G80 M3, BMW made several fundamental changes to the M3 and M4's drivetrain, most notably adopting a new eight-speed Steptronic automatic transmission in place of the previous-generation F80's seven-speed dual-clutch unit. While quick to up- and downshifts, the new 'box is just not as brutal as before. Where once you could hear and feel every gear change in the essence of your being, it has now been relegated to a charming thud that barely leaves an impression.

To put it in perspective: the current gearbox's highest intensity is not even on par with the previous box's medium setting. 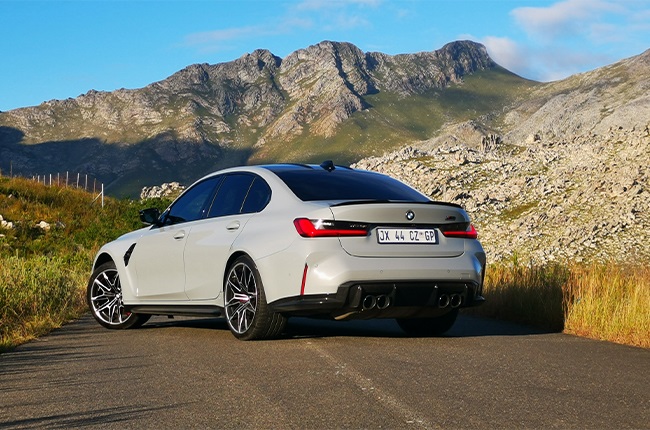 Thankfully, the M3 Competition is available in rear-wheel drive, but an xDrive (all-wheel drive) model will make its local debut later this year. There is a surety in how the car drives and performs, but it is a bit too clinical, too perfect, in how it goes about its business. Drivers can activate the M1 driving mode on the steering wheel to intensify the drivetrain and configure it to their liking, but the driving experience will leave you feeling more like a passenger rather than the driver. In other words, driving the M3 is not as demanding as before. And as a result, perhaps not as rewarding?

For those daring enough, drivers can activate the car's most intense driving mode by pressing the M2 button on the steering wheel (a second press will confirm/activate the setting). It will also deactivate all the electronic nannies. The test team refrained from exploring this mode, considering safety concerns on public roads. We, thus, encourage M3/M4 owners to explore M2, the car's most demanding driving mode, in controlled environments and away from members of the public. There's no need for anyone to be a hero on public roads. It still performs, though

Despite the mechanical changes brought about to the G80 M3, the car is still a brutal performance saloon. With 375kW and 650Nm produced by the turbocharged 3.0-litre petrol engine, 0-100km/h is cleared in 3.9 seconds, while top speed is electronically limited to 250km/h. The tyres provided ample grip on our twisty test route and ensured stellar exit speeds through some of the most challenging bends.

Our test unit was fitted with the optional M Race Track package that includes M light-alloy wheels, M Carbon bucket seats, and M Carbon ceramic brakes. These brakes provide impressive stopping power and will have you holding on for dear life as the car comes to a near-sudden halt. The M Race Track package also sees a reduction of 25kg to the car's weight.

Interestingly, while the bucket seats add to the car's ambience, it is just not very comfortable for everyday driving. It also compromises entry and exit, and sitting too early on the edges might have you mistaking the driving experience for a prostate exam. While the G80 M3 has left us with mixed emotions, there was a desire from the test team for this car to be the finest M3 yet. In our opinion, at least, it's not been the case. Being clinically perfect is one thing, but an M3 is supposed to involve you each time you set foot in it. The car feels underwhelming at the best of times. And while fast and achingly quick, there is just not an occasion to the driving experience as before. The M3 is just too tame compared to its forebears, and the punch it packs is effective but without cheer.

Imagine driving a Porsche 718 Cayman GT4. The car involves you as the driver, and you climb out of it with a smile because you just had a blast of a time. Though incomparable, that's what the M3 used to do. Not anymore. It has fallen victim to governing laws and restrictions, and the regulations sapped the soul out of it. All things considered, it is a brilliant performance car, but almost lifeless.

Any car can be driven hard and fast, but nothing should be able to compare with what an M3 puts on the table. It is just a pity that the new M3 forgot that... We live in a world where facts and fiction get blurred
In times of uncertainty you need journalism you can trust. For only R75 per month, you have access to a world of in-depth analyses, investigative journalism, top opinions and a range of features. Journalism strengthens democracy. Invest in the future today.
Subscribe to News24
Next on Wheels24
Reworked, refined and greener: Nissan's new Qashqai brings the SUV package full circle