• The Mitsubishi Xpander uses a 1.5-litre engine that pushes out 77kW and 141Nm.

• Pricing starts from R299 995 and is currently Mitsubishi cheapest model on sale in SA.

• The model on test makes use of a four-speed automatic transmission.

Mitsubishi - like Ford and Renault - no longer have sedans in their local line-ups, and the reason for that is relatively straightforward actually. The five and seven-seater SUV market is booming and automakers are ditching philosophies that once proved fruitful, i.e. sedans. Instead, they are moving with the times and giving the market what it wants.

Mitsubishi's last sedan to grace South African roads was the Lancer. Since its discontinuation, their current line-up has been overrun by SUVs like the ASX, Eclipse Cross, Outlander and Pajero. The Japanese brand has put all its eggs in one basket - so to say - with so many bigger-bodied options on sale. The latest addition to that fold is the seven-seater Xpander, also doubling as the brand's cheapest model on sale at the moment with a starting price of R299 995.

South African vehicle consumers can be compared to that family member who believes in only one way of doing things. Translated, they often stick to the tried and tested and sometimes pricier options because of long-standing brand allegiances. But Mitsubishi South Africa believes that locals will warm up to the award-winning Xpander. 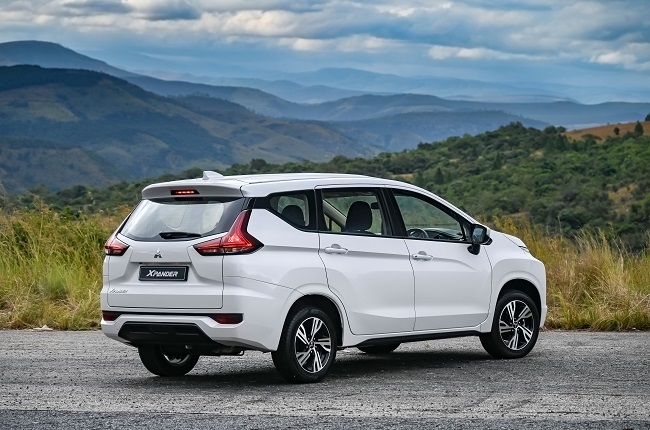 In June 2021 alone, the Xpander was Mitsubishi's second best-selling model with 65 new units sold - just two units behind the established Pajero Sport. The numbers might not take your breath away at first glance, but for it to almost eclipse a stalwart, could be a sign of things to come for the brand in the future.

The Xpander is immediately noticeable in the design stakes, borrowing the futuristic-looking front section also found on models like the Triton and Pajero Sport. The daytime running lights, grille, fog and headlights look like one complete piece, which is something different and doesn't look out of place against a white body colour.

The interior is pretty basic, with parts like the dashboard and door panels of the hard plastic variety. If you look closely, it also features a stitching pattern to emulate a leather trim stitching pattern. Mitsubishi follows the principle of 'Omotenashi' for the driver and its occupants, and when translated, it loosely means attention to detail and anticipating the guests' needs. Standard inventory includes electric windows all around, a USB port, three 12V sockets and full-automatic air conditioning.

The Xpander is available with both a four-speed automatic and five-speed manual gearbox. Models using the automatic transmission come with 16-inch alloys as standard, while the manual versions have smaller 15-inch options. Concerning drivability, the automatic is a hands-down winner even though the fuel consumption figure is slightly higher.

The naturally-aspirated 1.5-litre engine, pushing out 77kW and 141Nm, is surprisingly responsive for a generic automatic and performs with minimal fuss whether it makes full use of the seven seats or driving solo. The multi-information display screen is not the biggest, but more importantly, it houses the basics like your radio and Bluetooth connectivity which is really easy to configure.

Xpander is certainly not wanting for space with more than enough room afforded by the second and third-row seats that have a 60/40 split. Additional space is further maximised when the third row of seats can be folded completely flat.

With a starting price of R299 995, the Xpander goes up against some formidable and cheaper competition like the Toyota Avanza, Renault Triber, Suzuki Ertiga and Honda BR-V. However, some of them lack standard items like daytime running lights, USB points and a rear-view camera. 2021 Mitsubishi Xpander
Quickpic
We live in a world where facts and fiction get blurred
In times of uncertainty you need journalism you can trust. For only R75 per month, you have access to a world of in-depth analyses, investigative journalism, top opinions and a range of features. Journalism strengthens democracy. Invest in the future today.
Subscribe to News24
Next on Wheels24
Land Rover unveils Discovery special edition and it's coming to South Africa early in 2022

Subscribe to newsletters
Lockdown For
DAYS
HRS
MINS
Brought to you by
Voting Booth
Who do you feel was at fault for Verstappen and Hamilton's Italian GP crash?
Please select an option Oops! Something went wrong, please try again later.
Verstappen
25% - 1181 votes
Hamilton
42% - 1948 votes
They were both at fault
33% - 1538 votes
Previous Results
Car Doctor
WATCH | How to protect yourself from buying a water-damaged used car