REVIEW | The new Volkswagen T-Cross is no 'overgrown' Polo

They've just launched the 8th-generation Golf, scheduled to make its way here in South Africa in 2020, but it is Volkswagen's compact SUV offering that is the topic of discussion.

Much had been made of the T-Cross' introduction to the local market but the truth is that anything equipped with a VW badge always sells. The Polo and Polo Vivo models are proof of that and judging by last month's sales figures, the T-Cross is following the same blueprint. In its first month, 810 units were sold across the country and October saw the automaker sell 1 132 units - what a way to mark your debut.

The Makena Turquoise Metallic paintjob has quickly become something of a T-Cross trademark but you obviously also have the choice of eight other body colours. The 'Energetic Orange' pack is - you guessed it - full on orange. This includes everything from the seat covers to the steering wheel and black 18-inch 'Cologne' wheels splashed in Orange. The 1.0-litre TSI Highline is the model in question here, equipped with R-Line goodies and a smooth shifting 7-speed DSG transmission. It's 999cc petrol engine is good for 85kW but pushes out a chunky 200Nm thanks to some good old turbocharging. There are two more variants, the 1.0 TSI 70kW (coming in at under R300 000) and the range-topping 1.5 TSI 110kW R-Line, which will make its way to our shores next year.

What do you think of the Volkswagen T-Cross? Is it just a bigger Polo? Email us.

Its fuel consumption of 4.9-litres/100km puts it in the same league as the Renault Kwid and Datsun Go, merely sipping unleaded fuel from the 40-litre tank. 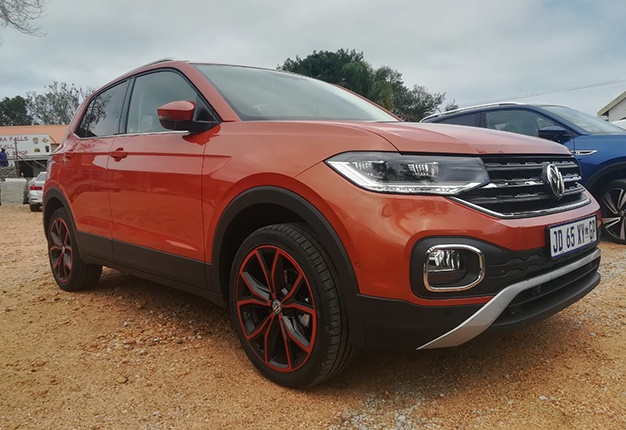 Compared to the Polo, it measures 4.2-metres in length, 182mm more than its hatchback sibling. One thing immediately noticeable is the elevated ride height from the driver and passenger seats, sitting 597mm above the road allowing for a greater vantage point from those supremely comfortable patterned leather seats.

Speaking of, the interior is a playground of technology with the combination of a high-resolution 12.3-inch TFT colour display and optional Active Info Display that is an absolute treat on the eye.

Check everything from driving data, speed and driving range while using the the optional multifunction steering wheel to navigate where you want to be. The patterned dashboard console is something different but maybe not to everyone's taste where a dash is normally a single-tone colour. The R-Line exterior is a pleasing addition and combined with the 18-inch Nevada wheels, gives it a robust posture, likened more to that of an SUV than a certain hatchback in its stable. The horizontal brake light is a design cue borrowed from the Audi Q8, giving the rear an almost 'Cyclops of X-Men' look.

Pop the boot open and you have 377-litres of space to play with. If you have the rear seat back folded down fully or partially, you can create a flat loading space with up to 1 281 litres of storage space, making it the best in its class.

The engine start/stop button is positioned to the left of the gear lever, not a very smart place because it is completely out of view if you're getting into the car for the first time. The auto stop/start function needs a bit of tinkering because the car switches off even when the car is still rolling slightly, thus reverberating an uncomfortable shudder, however that could just be contributed to my driving style. There is also a slight lag when wanting to pull away in stop/start mode after the car has turned off.

Yet, it is a gem to drive. You feel in control over everything while the DSG transmission does its job of split-second shifting. The park assist and rear camera come in really handy while the motion detector beeps are loud enough to let you know there's an ant on it.

You wouldn't be able to tell that it is powered by a tiny 1.0-litre engine because everything works well together. It is an SUV with the agility of a hatch. A balance that you can feel on the road.

The T-Cross proves it is in a league of its own and not some 'overgrown' Polo. You only need to get in and experience the car for yourself to know what it is all about.

Pricing starts from R334 900 for the Comfortline that comes standard with features like the 16-inch Belmont wheels, Park Distance Control and Leather-wrapped multi-function steering wheel.

We live in a world where facts and fiction get blurred
In times of uncertainty you need journalism you can trust. For only R75 per month, you have access to a world of in-depth analyses, investigative journalism, top opinions and a range of features. Journalism strengthens democracy. Invest in the future today.
Subscribe to News24
Related Links
10 facts to know about the new Volkswagen T-Cross in SA
This is how much the Volkswagen T-Cross will cost in SA
Next on Wheels24
The history of the Mercedes-Benz C-Class