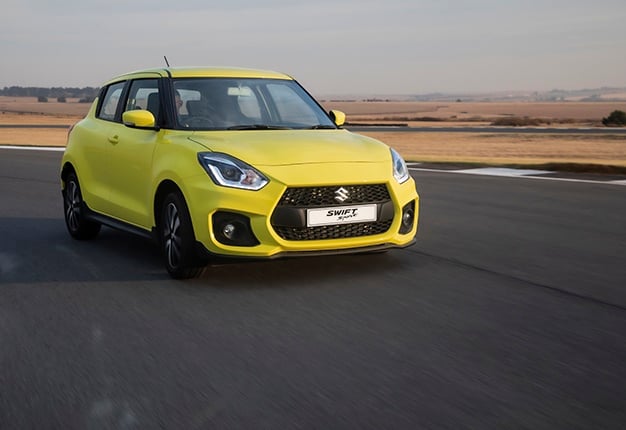 Christmas might only be a few months away but a special present came a bit early this year and with its Champion Yellow paint job, it was not easy to miss.

If you're real clued up about Suzuki colour names then you would know I am referring to the Swift Sport.

I enjoyed driving the 1.2-litre GL model last year but I was eagerly awaiting the arrival of the sportier derivative. It was around 9am on a Tuesday when Wheels24 editor Janine Van der Post mentioned words that sent my mind into a stupor: 'You can take the Swift Sport'. Think Christmas, little kid wanting an XBox, and finally gets his hands on it.

It certainly looks the part on the outside with a much wider and robust stance, compared to its predecessor, while carbon fibre-patterned side 'skirts' break the colour nicely. The passenger door handles situated next to each rear window gives it a full on 2-door look which further enhances visual appeal.

It sits pretty courtesy of 16-inch alloy wheels but it is in the rear where you see this little hatch means business. The single, twin-exiting exhaust tailpieces, and the red 'Sport' badge calls out anyone who dares test it. The front section sports a larger front grille covered in black that is responsible for feeding the turbo with oxygen and shines brightly at night thanks to its LED headlights and LED daytime running lights.

There is a range of seven colours to choose from - Burning Red, Speedy Blue, Pure White, Super Black, Premium Silver, Mineral Grey and the popular Champion Yellow. Pricing starts from R315 900 for the manual while the automatic is a bit pricier, coming in at R335 900.

I am a purist so I was more than happy to receive the 6-speed manual option, although you can choose the automatic, paddle-shift option which is just as fun.

You feel the sudden jolt of boost from as quickly as 2 000rpm, not so much the claimed 2 500rpm and it just keeps getting better from there. The 1.4-litre Boosterjet engine, the same one used in the Vitara Turbo model, is responsible for all the fun, churning out 103kW and an impressive 230Nm of torque. Combine all that with a kerb weight of just 970kg and you possess superb traction, and road-holding characteristics under your right foot, and in your hands.

The principle used in the Swift Sport is that of refinement in areas like the chassis and suspension, making it quicker on the road than its power figure warrants. Engineers shaved more than 10% off its body weight by focusing on its doors, chassis, wheels, engine, seats, and interior fittings. Because its such a gem to drive, you don't really keep an eye on fuel consumption.

In all fairness, it's not as bad as one might think, especially with the added wizardry of forced induction. It's claimed fuel consumption is 6.1litres/100km but I averaged around 7.1l/100km for the simple reason that it is impossible, and irresistible, not to plant the fun pedal.

A darling on the inside

The interior is befitting of a true sports model, kitted with red trim on the door panels and dash console while a pair of semi racing seats embroided with the 'Sport' logo keeps you in position.

A total of 242-litres of boot space is convenient and that can be expanded to 556 with the rear seats folded down.

Entertainment and connectivity is taken care of with a 4.2-inch colour LCD with accessibility to Android Auto, Apple CarPlay, a reverse camera, Bluetooth and USB connectivity, while there are AUX and a 12V accessory points as well. I really like the three-spoke steering wheel wrapped in leather with nifty steering-mounted controls to make sure your eyes are kept firmly on the road. It has keyless entry and the push start/stop function works just fine.

I would like to have experienced the car on track but the only matter of concern was avoiding rubber and stone chips on such a bright and beautiful colour. However, there's always preventative measures like having your car wrapped, or getting a bonnet guard, if you're obsessive about it.

If I had any criticism of this car it would have to be that it runs out of steam higher in the rev range but then again it is a small capacity engine with low-end boost being its trump card. Overall, the car is such fun to drive with a manual 'box' but it would undoubtedly perform much better with an automatic transmission - as a purist I don't like to admit it.

Janine Van der Post says: "The Swift Sport has so much street cred, and is such an attractive hatchback in the market. It's no wonder that Wheels24 readers had been asking about it months before it arrived locally.

"It's so sporty inside, and out, and that bright Champion Yellow has become synonymous to the brand.

"It's hella punchy to drive and definitely stirs the boy- or girl-racer in anyone who is behind the wheel. The Swift Sport's pricing is quite competitive and makes a great alternative option to the 'normal' offerings in its segment like the VW Golf or Ford Fiesta."

We live in a world where facts and fiction get blurred
In times of uncertainty you need journalism you can trust. For only R75 per month, you have access to a world of in-depth analyses, investigative journalism, top opinions and a range of features. Journalism strengthens democracy. Invest in the future today.
Subscribe to News24
Related Links
'The world needs cars like the Swift Sport' - Suzuki's hottest little hatch driven in SA
New Suzuki Swift Sport lands in SA
Next on Wheels24
Out with the H1, in with the new: What to know about Hyundai's new premium SA-bound Staria MPV