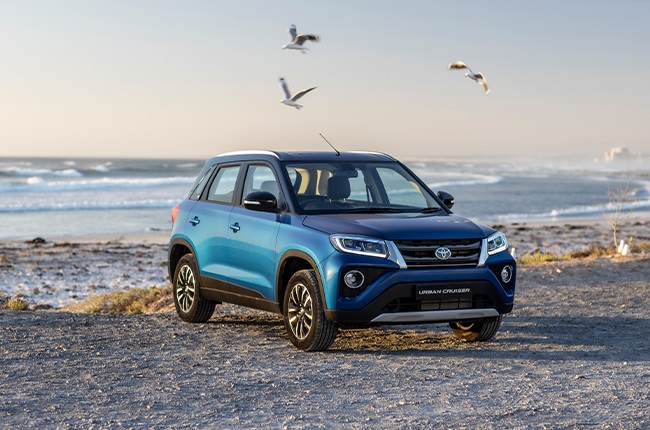 • The Toyota Urban Cruiser is based on the Suzuki Vitara Brezza.

• The range is powered by a 1.5-litre four-cylinder engine that delivers 77kW and 138Nm.

The Toyota Urban Cruiser is a fine example of a sub-compact SUV or, more accurately, a compact crossover. It is also very popular.

Toyota thought they would sell around 640 cars a month but are managing just under a thousand every month since the launch, which is three times more than the Suzuki Brezza on which it is based.

The baby Cruiser is meant for urban driving, feels nippy in town, and gets up to the legal limit on the highway without any fanfare, but I must say a little wind noise.

The normally aspirated 1.5-litre four-cylinder engine puts out 77kW and 138Nm through either a five-speed manual or a four-speed auto box using around 6.5-litres/100km of fuel if driven with a lightish foot. It deals with gravel and good jeep tracks quite well due to its 198mm ground clearance but only has front-wheel drive, so don't expect too much. Luxury items included in the standard package include an automatic dimming rearview mirror and rain-sensing wipers, aircon, park distance control, and a touchscreen infotainment system with USB, Bluetooth, Apple CarPlay and Android Auto, as well as the Toyota Connect telematics system, which includes an in-car Wi-Fi hotspot and 15GB of data through which you can book a service and access vehicle information. Safety is quite good with all the basic kit and a four-star rating.

I found the Urban Cruiser to be a very competent small car with adequate space for four adults, a usable boot that can be expanded by folding the seats almost flat and pleasant road manners. Great for a family with small children or empty nesters with places to go.

We live in a world where facts and fiction get blurred
In times of uncertainty you need journalism you can trust. For 14 free days, you can have access to a world of in-depth analyses, investigative journalism, top opinions and a range of features. Journalism strengthens democracy. Invest in the future today. Thereafter you will be billed R75 per month. You can cancel anytime and if you cancel within 14 days you won't be billed.
Subscribe to News24
Next on Life
WATCH | Need something fuel-efficient? 3 fresh hybrids coming to SA