In its fourth generation, after two decades of honing and refinement since its launch in 2002, the Kia Sorento has, arguably, become one of the most luxurious sport utility vehicles (SUV) ever made.

The range-topping 2.2CRDi AWD SXL version we recently tested in Johannesburg came with many features, a supremely spacious interior, and an amazingly frugal engine. It was so mesmerising to live with that it made cars that cost nearly twice as much seem overpriced and under-appointed. 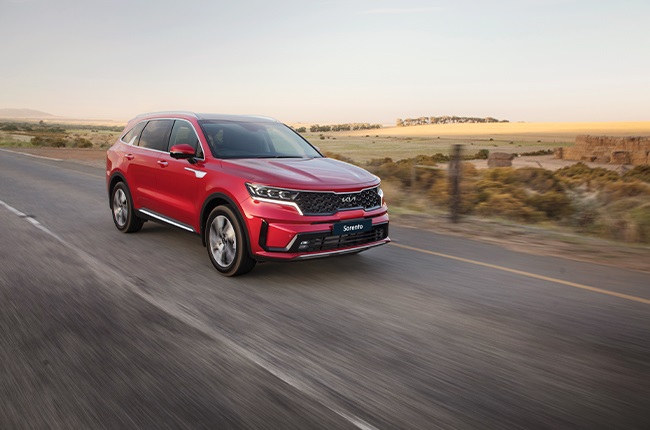 Big car, but not cumbersome

Measuring 4810mm in length, 1900mm wide (with mirrors unfolded), and standing 1700mm tall, it offers seven seats and the flexibility of folding unused chairs flat for extra cargo space. With a ground clearance of 176mm, we had no issues climbing the pavements outside the kids' schools, and it didn't snag underneath when we took it on a loop of the dirt road course that we use for testing. The all-wheel-drive system proved capable enough for sure-footed handling on the dirt and wet tarmac, and the brakes were easy to modulate with an excellent reassuring feel through the stopping pedal as you lean on it to come to a standstill. Although it's a large vehicle, and you might battle to fit it in some older parking bays and smaller garages, it remains agile and easy to manoeuvre. Light power steering, not too soft, helped make a massive people hauler feel like a luxury sedan, and for those sportier moments, the, er, Sport, mode helped add weight to the steering mechanism for a meatier feel.

The nicest thing about our test car that added to its easy-to-drive nature despite its size was the array of cameras front, side and rear. You get a nice high-resolution view of your surroundings, making parking a cinch regardless of lighting conditions. We expected the Sorento to feel a little ungainly, but the way they've engineered it with the driving modes and the electric power steering and driving aids, you simply get in and go, and you feel at home from the moment you make your first corner. So many features, so little time

We could fill this entire piece with a story about the Sorento's indicator-view camera system and how it prevented us from sideswiping a biker who was illegally lane-splitting. This system shows you your left or right blind spot in the digital instrument cluster in the range-topper, depending on which side you indicate. It's not new in the automotive world, as our 2015 Honda Accord offered a similar function, but it's nice that it comes as standard in the new Sorento SXL. The blind spot camera system also works well on highways, as you can easily pick up drivers who hang around in adjacent vehicles' blind spots. The vehicle also has a lane-keeping assistant that can mildly assist you in making minor bends with the active cruise control engaged. It will also tug you back into the lane if you drift over the painted lines without indicating. Again, other premium vehicles are fitted with this technology, but you have to pay extra for it most of the time.

The Sorento's system doesn't feel intrusive or harsh like you're wrestling the steering wheel as the car wants to go in one direction, and you try to send it in another. The artificial intelligence in the driving aids can be harsh in some cars, but Kia seems to have nailed the algorithm here as you don't feel like you're fighting against the machine on a relaxed highway drive or in the city, for that matter. Of course, you can expect all-electric operation for the windows and mirrors and seats, six airbags, and anti-lock brakes with hill-hold and downhill speed control. You also get lovely climate control and plush leather seats with heating, cooling and massage functions. In fact, even the steering wheel is heated in the range-topping Sorento, which is perfect for cold winter mornings.

We found everything to come together in this car, from the banging audio system that offered wireless Apple CarPlay and wireless charging to the digitalised instrument cluster that changes as you cycle through the driving modes. You must ask the salesperson you're dealing with when test driving one of these to give you a good tour of all the features in the brochure because there's so much to take in that you might not realise how advanced the vehicle is, particularly the SXL. Performance, economy, best of all words

The 2.2-litre turbocharged four-cylinder diesel engine fitted to the Sorento is hardly a newcomer as both Kia and Hyundai use the modular powerplant across their respective line-ups. We enjoyed the Hyundai Palisade with this engine, and it's the same story here, as you get a responsive drive considering the bulk of the vehicle.

Power is rated at 148kW at 3800rpm, while peak torque is rated at 440Nm from as low as 1750rpm. Combined with a sweet-shifting eight-speed double-clutch automatic gearbox and well-stacked ratios, you get a nice clean and swift pull away from a standstill, and it can quickly overtake without breaking a sweat. It's nice to have this sort of grunt to call on for a confident feeling from the driver's seat, especially if you plan on loading it to capacity as a holiday tour bus. But of course, power is easy to achieve if you don't care for fuel consumption, and this is where the Sorento shines. Kia claims that it will sip 6.8 litres per 100km in a combined cycle, and while we only managed to achieve 8 litres per 100km during our test drive period, it remains a hugely respectable thirst considering the size of the car.

On the highway, you can see as low as 6 litres per 100km if you stick to 120km/h. This is particularly handy for cross-country drivers as you can easily achieve more than 1000km per tank if you respect the go-pedal. After spending a few days with the Sorento SXL, driving it in the city and on the highway, and using it as a commuter and cargo vehicle, it proved itself a worthwhile companion. Our test car came in at R994 995, which is certainly not cheap, but it's a heck of a lot of "car" for your money when you consider what else is out there for around the same price these days.

The new car price list shows that you'll pay around R896 224 for an entry-level BMW X3 Sdrive18d these days. The Beemer doesn't have all-wheel-drive or the poke that the Sorento offers, and no way will it compete with standard features or on space. There's merit in the BMW, sure; it's built locally, and you'll be contributing to the local economy in a more meaningful way if you buy one, but if you want a pound-for-pound winner - you cannot ignore the Sorento SXL at this price point.

Other cars might tickle your fancy, too, such as a Jeep Wrangler, but that vehicle costs around R902 900 now, and you won't get the refinement you need in a daily driver, although the Wrangler remains hugely capable offroad. Audi's Q5, priced around R913 100, might be an option for you too, but that car can get expensive once you start throwing features at it from the options list, and again, you won't get the seating for seven.

Overall, if we had a bar to drop on a new SUV for the family, we'd find it very challenging not to head straight to our nearest Kia dealership to sign up for one right now. If you're thinking of going electric in future, why not go the Sorento route now and then look at the EV6, which is under consideration for SA in the coming year or two.

The Kia Sorento comes with a five-year or unlimited-kilometre mechanical warranty and a six-year or 90 000 Maintenance Plan.

We live in a world where facts and fiction get blurred
In times of uncertainty you need journalism you can trust. For 14 free days, you can have access to a world of in-depth analyses, investigative journalism, top opinions and a range of features. Journalism strengthens democracy. Invest in the future today. Thereafter you will be billed R75 per month. You can cancel anytime and if you cancel within 14 days you won't be billed.
Subscribe to News24
Next on Wheels24
Supercharged. Turbocharged. Electric boost! Volvo XC60 B6 Inscription has a V8 feel to it