Priced at R546 900, the new seven-seater Chery Tiggo 8 Pro is hugely compelling. After all, in this world of constantly rising car prices, you won't find a spacious family vehicle like this - that's packed with so much luxury and technology - for this kind of cash.

A decently equipped Hyundai Grand Creta will set you back around R559 900 (and that's a slightly smaller SUV), while something like a new Volkswagen Caddy will cost around R600 400 (and it's a commercial vehicle underneath). If you're willing to make do with a five-seater, you could consider the BAIC B40 as an option (R609 500), but you might want to read about our experience with that car first.

We drove the Tiggo 8 Pro for the first time at its South African launch earlier this year and came away impressed. There were a few concerns around the vehicle's brakes during the launch, as the brake pedal felt wooden, and you had to really stand on it to bring the car to a stop even from suburb speeds. As these launch cars had a few 100km on them, we figured the tyres hadn't even scrubbed in properly yet, and the brakes needed to bed in a bit more before we could adequately assess its stopping capability. Now that we've had a week to assess the Tiggo 8 Pro, driving it daily around Johannesburg and on the highway to Pretoria and back a couple of times, we can report that braking remains a challenge in the Tiggo 8 Pro. Sure, it does stop, and you get used to the stopping pedal's feel after a few days, but the artificial feedback does nothing to boosting confidence on the road. In fact, using the brakes during inclement weather highlighted the car's lack of composure in the event of an emergency.

As you stand on the anchors, the car feels like it's transferring all its weight onto the front axle. We tried a few emergency braking stops, from 60km/h and 100km/h in a controlled environment. Although we didn't have GPS measuring equipment attached, the vehicle stopped later than other SUVs we've tested on this same piece of tarmac. If you're turning and braking, the experience is even more daunting as the vehicle lunges with a lack of body control. It's too fidgety when you need to call upon the brakes in an emergency, which troubles us as it's a family car.

It might have seven airbags, all the traction control technology, and it might be built with sturdy metals, but Chery has to address the brakes on this vehicle to bring it in line with other vehicles we've assessed. 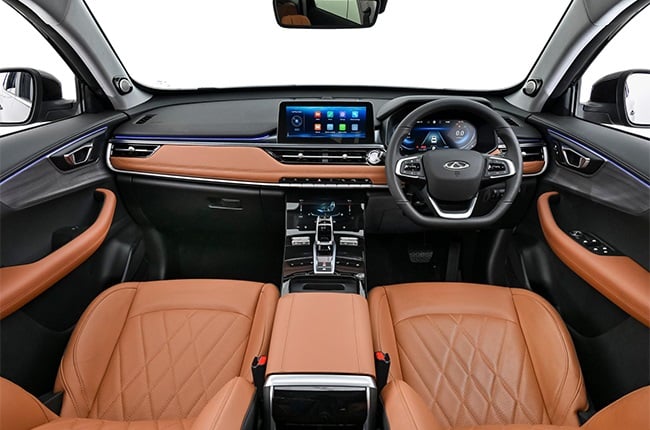 A few odd things we experienced

Away from the odd brakes, the Chery Tiggo 8 Pro has a strange interior rearview mirror. It's almost as if you're looking into a wide-angle lens, which took some time to get used to. On some occasions, depending on the glare from the sun, looking into the rear-view mirror gave me a headache. It would dazzle my eyes, and the unorthodox magnification almost made me not want to look up at the rear-view mirror when driving, which is very irresponsible.

The Chery Tiggo 4 Pro offers a traditional mirror view, which didn't prove challenging, so we're unsure why the carmaker would change this car's setup to its detriment.

We also found the car's drivetrain unrefined and laggy in the Normal driving mode. It's as if the double-clutch gearbox gets confused depending on your throttle position; this often leads to an unresponsive moment before the vehicle selects the correct gear and the boost from the engine arrives. You have to be very careful with your accelerator input to avoid that whack of torque rocking your head back and forth from a standstill, especially when the road is a little wet.

This lack of refinement isn't a deal-breaker, but it makes the car feel grittier than it should when you're spending more than half a million bucks. There are plenty of redeeming qualities

Although we were left slightly disappointed with the the Tiggo 8 Pro's driving experience, even with some miles on it, it offered several redeeming qualities that make it a worthwhile offering. Those seven seats we mentioned are exquisitely finished in an excellent leather-like material, and they are comfortable.

You also get a respectable level of interior refinement with nicely trimmed doors and an adequately executed dashboard. There were no rattles or squeaks, and the build quality seemed on par with other vehicles at this price point. We liked the driving position and the clear view from the cabin.

READ: REVIEW | Citroen C3 Aircross drives like a dream, but why does it have to look like this?

The kids liked the expansive sunroof and the kick-ass audio system that supports Android Auto and Apple CarPlay. We were quickly able to stream Apple Music and Netflix audio in the car to keep the youngins entertained. They were able to use Siri to ask for the content they wanted as the vehicle is fitted with an impressive microphone system. The car also comes with an embedded voice control system. You simply say, 'Hi Chery', and it will do almost anything you ask it to. It's one of the few cars we've tested with voice control that can open and close the windows and the sunroof using voice. Quite impressive. Worth a shot if you want something different

You get more than enough power and torque here from the 1.6-litre turbo petrol four-cylinder engine (145kW and 290Nm), but it's delivered in a peaky manner. That seven-speed double-clutch gearbox also works well in Sport mode, providing decent shifts, albeit half a second after you call for the gear using the shifter. We averaged around 12-litres/100km in our combined-cycle run, but we kept it in Sport mode for most of the test to avoid its lethargy.

We also drove it in manual mode most of the time to prevent the gearbox from hunting in traffic or at low speed. All-wheel-drive would have also been nice as the front-wheel-drive Tiggo 8 Pro did struggle for grip in the rain with its front-wheel-drive setup.

READ: REVIEW | BMW's new X3 xDrive20d is impressive, but it's getting on the X-pensive side

Overall, regarding features, you get seven airbags, anti-lock brakes, an electronic stability programme, and a fantastic camera array that makes it easy to drive and get around. The boot is also decent, as you can still load around 193 litres of cargo in the back with all the chairs in their upright positions. Drop the seats, and you'll easily be able to transport you and your partner's mountain bikes to your favourite trails. You won't feel shortchanged for space or creature comforts, and if you don't push the vehicle too hard, you might find it perfectly satisfying for you and your family's needs. Chery's looking to right the wrongs of its previous importer, and they promise decent aftersales thanks to a growing network of dealers that now stand at more than 50 outlets nationwide. Since the Tiggo 4 Pro launch late last year, the company has been selling more than 500 vehicles a month. This Tiggo 8 Pro will raise that number further, while the company is also planning to launch the Tiggo 5 and the Tiggo 7 here in the coming months.

With a decent five-year/150 000km mechanical warranty and a five-year or 60 000km service plan, you are at least given peace of mind when it comes to cost per km for the next half-decade. Chery is so confident of its engine that it's giving the first owners of their vehicles a 10-year or 1 000 000km engine warranty. If you're an early adopter/trendsetter and in the market for a decently priced large car, give the Tiggo 8 Pro a twirl but keep in mind some of the quirks we mentioned.

PS: If you've bought a Tiggo 8 Pro, please share your thoughts on living with the car with us and the rest of Wheels24 in the comments section below (or send us an email here).