Wheels24 contributor Calvin Fisher spends some time with an outgoing Ford Ranger bakkie before the new locally-built model goes on sale in South Africa. He discovers there's still plenty to love about this vehicle, especially as a cyclist and an outdoor enthusiast.

Ford bakkies fans eagerly await the arrival of the new Ranger model line-up, which will be launching imminently, along with the new Ranger Raptor. It means the current Ranger models signal the closing of a long-running chapter. But, before the new bakkie arrives, I get a last stint in the outgoing model. Meet 'my' Ford Ranger Stormtrak, resplendent in Frozen White and adorned with just the right amount of 'go faster' striping.

READ | Besides the Ranger, this bakkie outsold the Hilux in July - plus other best-selling sale stats 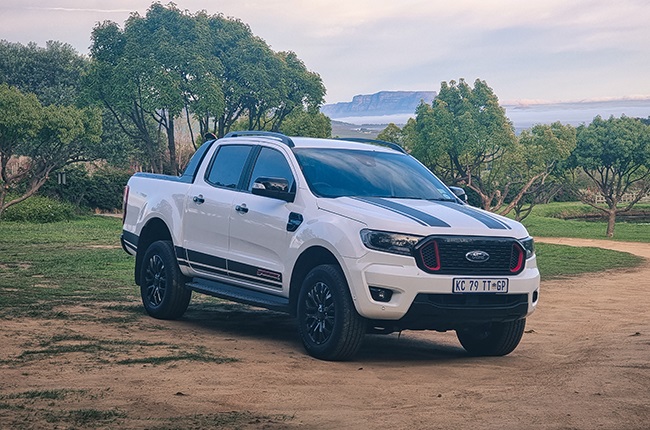 It's no secret that South Africa loves a double-cab bakkie and that there's a well-documented rivalry between the Blue Oval and Toyota. I've often conceded that you can hop aboard either and fully subscribe to the lifestyle without fear of missing out.

Yet, despite being a considerably older chassis by now, the Ranger still manages to turn the most heads. Perhaps it's a testament to how Ford has exploited our fascination with special editions such as the Wildtrak and the FX4. Or maybe they just got the formula so damn right from the very start.

The Stormtrak, in particular, is quite striking, decked out with black detailing on everything from the grille and diffuser to the roof rails and roll bars, alloy wheels and the load bin's surrounding garnishes. Then there's the liberal splattering of Rapid Red paint to really set it apart, as seen on its badges and nostrils. Sorry, I mean the edges of the grille. You can even have the whole bakkie in Lucid Red if you so wish, or a brochure-friendly Blue Lighting hue, and finally, a more conservative Sea Grey. I prefer the Stormtrooper aesthetic mine has, especially when I've covered its undersides and 18-inch black alloy wheels in a muddy brown. 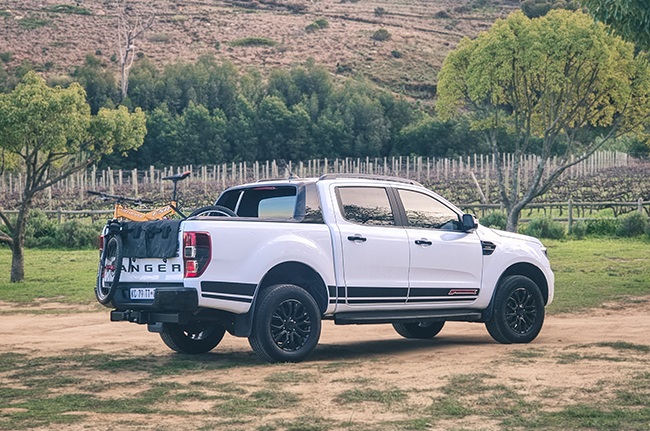 See, I'm a severely afflicted mountain biker, and even in a month full of panel vans, MPVs and SUVs - a well-appointed bakkie is the absolute business. There's nothing like throwing a bike or two into the back of a truck, and I love the fact that this one comes with an automatic roller shutter for extra security.

Under its bonnet resides Ford's most powerful (for now) Ranger engine, the twin-turbocharged 2.0-litre diesel with 157kW and 500Nm. It's mated to the same ten-speed automatic transmission that does duty in the Ford Mustang. The resultant performance is linear and smooth, with plenty of torque in reserve.

Whether you're cruising in the right lane of the N1, carving up long gravel roads or navigating tricky rock patches, the Stormtrak has what it takes to get you where you're headed in style and with no shortage of attention. For me, that mostly means the parking lots of remote mountain bike trails, where I circle the gravel like a beast on the prowl, looking for a spot to unload.

In short, I've loved my new metal counterpart. We're not done. Adventure awaits. This is great because it comes with onboard navigation and also features Android Auto (and Apple CarPlay), allowing me to use my own Google Maps in offline mode for venturing off the beaten track. A further perk of this is that I can stream my music directly off my smartphone, so that's an infinite supply of road trip music right there via Ford's six-speaker sound system. And that's just bliss.

At R874 100 for the 4x4 model, the Stormtrak in my driveway represents a great ownership experience and is essentially the flagship of the outgoing model, unless you're in the market for the bonkers Raptor edition. It's the end of an era, sadly, but I can't help but be excited at what comes next when the new Ranger arrives.

We live in a world where facts and fiction get blurred
In times of uncertainty you need journalism you can trust. For 14 free days, you can have access to a world of in-depth analyses, investigative journalism, top opinions and a range of features. Journalism strengthens democracy. Invest in the future today. Thereafter you will be billed R75 per month. You can cancel anytime and if you cancel within 14 days you won't be billed.
Subscribe to News24
Next on Life
REVIEW | Kia Carnival is the ultimate family party bus with more space than a small apartment