REVIEW | Ford's Ranger Raptor SE excels in many areas, but it begs for more power

• After six months, the Ford Ranger Raptor Special Edition sees its time with the Wheels24 test team come to an end.

• The bakkie saw plenty of adventures, but gave good insights into the ownership experience.

For the last six months, we spent time driving one of the finest bakkies in South Africa: the Ford Ranger Raptor Special Edition (SE). This specific derivative was launched in the country in 2021's second half and added to a package that had already impressed from the word 'go'.

Ford knew that its Ranger Raptor was special, evident by the positive uptake from buyers. The standard model is a hit among bakkie lovers, so it only made sense to have the special model to enhance the range. Items that set the bakkie apart include racing stripes and an improved interior. But perhaps the biggest news was the addition of a manual roller shutter over the load bin.

The shutter exposes access to the bin via a key and a tug of a rope. Sadly, space is compromised at the far end of the loading area because of the shutter's holding bin. Packing the bakkie for a trip with five people never sees the loading bay suffer any shortcomings, but these do come to the fore when hauling larger items. The Ranger Raptor SE's interior is not that much different from a Ranger Wildtrak. If anything, you'd be forgiven for believing you're in a standard bakkie after clambering inside blindfolded and having it removed. The only real giveaways are the red stitching (similar to Wildtrak, Thunder, and Stormtrak) and the red centre indicator on the steering wheel.

The big gear-changing paddles behind the steering wheel also indicate what you're dealing with here.

Cabin-wise, five occupants can seat themselves comfortably, and those in the front are treated to heatable seats - a real treat on those South Africa's cold mornings.

READ: How a drive in the Ranger Raptor put this school girl's personal challenges on the backburner

Yet, despite the relatively scant indications of this being a Raptor, the cabin is extremely familiar and testament to what Ford has been putting out over the last decade. Ergonomically, the positioning of dials and buttons is thought through, and one is never left with a desire of needing everything to make sense; because it does.

The multimedia system has proven to be finicky at times, though. With my Android set as the primary device, the phone's Bluetooth rarely stayed connected between drives. In this instance, I'd have to remove it from the system's memory bank and reload it again as a new device. Android Auto (and Apple CarPlay) is a boon and very simple to activate, but Apple devices seem to have far fewer troubles than Android. 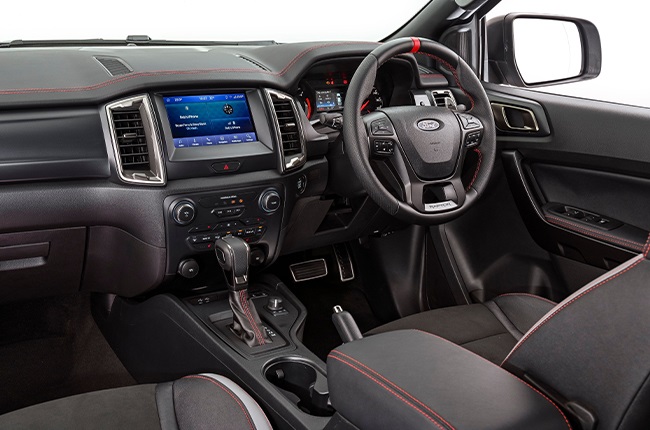 It's got the looks - bold looks

The Ranger Raptor is surely one of the most impressive bakkies in South Africa. From the front to the rear, every inch of the Raptor portrays a message of intent and purpose. Of course, the 283mm of ground clearance and the 285/70 R17 AT3 tyres have everything to do with it. The Raptor's width is also 150mm more - front and rear - than the standard Ranger's, and it makes the bakkie quite big and daunting when it suddenly appears in your rear-view mirror.

Our long-termer came in Conquer Grey, one of four colours unique to the Ranger Raptor SE. It is complemented by racing stripes running along the bonnet, roof, lower body sides, and tailgate. These stripes are all designed to portray the bakkie's sporty nature. Ford announced earlier in 2022 that its upcoming all-new Ranger would have a 3.0-litre V6 turbodiesel engine ruling the roost, but for now, a bi-turbo 2.0-litre turbodiesel takes care of all the headlines. This engine, used for application in several Ranger and Everest models, offers 157kW and 500Nm of torque, sent to the road via the Blue Oval's 10-speed automatic transmission.

Performance-wise, the Raptor SE runs at a decent pace once up to speed, making the driver feel like the proverbial king of the road. At 2 338kg, however, the Raptor is around 300kg heavier than the standard bi-turbo Ranger double cab 4x4. One can feel the weight when out and about, and the bakkie feels slightly sluggish off the line.

READ: Checked and aligned - Why your vehicle's tyre maintenance is of cardinal importance

The bigger tyres also impact how the bakkie turns, making it a tad heavier than the standard Ranger.

Regarding the bakkie's off-road prowess, very few in the segment can hold a candle to it. The raised ride height, increased ground, enhanced suspension, and bigger and better brakes increase the bakkie's off-road capabilities. The Raptor SE felt at home on the many gravel roads we traversed and made small work of the corrugated undulations.

After more than 7 000km of ownership, the Ford Ranger Raptor SE returned an average fuel economy of 12.3-litres/100km. At best, in various driving conditions, we covered around 500km on a full fuel tank - some 250km less than the standard Ranger. The Ford Ranger SE is a bakkie worthy of plenty of praise. It does everything differently and runs with confidence very few bakkies can match. And rightly so, it's been headlining the current Ranger line-up as one of the best bakkies in South Africa. Is it without fault? Definitely not, but these are in the minority and the positives more than make up for any shortcomings.

Ford's bi-turbo engine does an adequate job in the other vehicles in the Blue Oval's local portfolio, but one can't help but feel that the Raptor is left wanting for more… power. What the engine offers is good on paper, but a Raptor needs more. More of everything. Luckily, Ford will be addressing the power issue with the new Ranger Raptor in the form of a 292kW 3.0-litre V6 petrol engine in the near future.

We live in a world where facts and fiction get blurred
In times of uncertainty you need journalism you can trust. For 14 free days, you can have access to a world of in-depth analyses, investigative journalism, top opinions and a range of features. Journalism strengthens democracy. Invest in the future today. Thereafter you will be billed R75 per month. You can cancel anytime and if you cancel within 14 days you won't be billed.
Subscribe to News24
Next on Wheels24
Supercharged. Turbocharged. Electric boost! Volvo XC60 B6 Inscription has a V8 feel to it