REVIEW | Jaguar E-Pace 300 Sport is the athlete in the range, but with an Achilles heel

• The new Jaguar E-Pace was launched in SA earlier this year.

• Several models make up the line-up, which include the 300 Sport derivative.

In May 2021, Jaguar's updated E-Pace made its way to South Africa. As the smallest SUV in the British automaker's portfolio, it slots in below the F-Pace and headlining all-electric I-Pace to complete SUV offering. It's not a bad looking vehicle, this E-Pace, and exuberates a sense of athleticism.

Especially our test unit, the E-Pace 300 Sport, is draped in everything needed to make it the showstopper in the E-Pace range. These include the Caldera Red paintwork, stylish 20-inch alloy wheels, red brake callipers, Pixel LED headlights, and fixed panoramic sunroof. Whether most of these items are optional extras, they add to the E-Pace's appeal.

It would seem that the SUV has everything going for it, but with the good comes the not-so-good. When one opens the E-Pace's doors, illuminated Jaguar treadplates welcome you to the inner sanctuary. In typical Jaguar fashion, these signages are the first introduction to the automaker's latest generation interior that houses a host of features, including Jaguar Land Rover's latest multimedia system, Pivi Pro.

Glance and feel over the interior and the materials used in the E-Pace 300 Sport feels sturdy and solid to the touch. Even the steering wheel fits almost perfectly between one's hands with the paddles to change gears just a stretch of the fingers away.

Jaguar is quite proud of its new 11.4-inch HD touchscreen that is three times brighter and 48% larger than the one it replaces. From here, drivers/owners can customize the screen to their liking, moving menus around as they see fit. The layout now does make navigating through it a breeze, with even a want-to-learn tech-strained user able to learn the ins and outs of the new system.

Five passengers can fit comfortably on the provided seats, with the loading bay offering a more than respectable 494 litres of storage space. As the athlete in the E-Pace line-up, the 300 Sport is fitted with a genuinely sporty engine. This turbocharged 2.0-litre petrol mill is also used in other Jaguar products like the F-Pace and F-Type, but it's found an ideal home in the latter where it acts as the entry-point to the sports car range. In all applications, engine outputs are rated at 221kW and 400Nm. And in the E-Pace, power is sent to all four wheels via a nine-speed automatic transmission.

Performance is a rather brisk affair, too, with 0-100km/h cleared in 6.9 seconds and top speed a claimed 241km/h. It feels lively, as well, but that, sadly, comes at a cost.

Coming off the production line, the E-Pace tips the scales at a heady 1 952kg. That's 52kg heavier than the entry-level F-Pace. Hauling that much weight around affects the SUV's on-road dynamics through twisty roads, which, in turn, influences the brakes' effectiveness. While steering input is direct, the smallest SUV in Jaguar's line-up feels a bit bulky due to its increased weight.

But perhaps the biggest downside to the E-Pace 300 Sport is the poor fuel economy. Sure, driving the performance model in the range, you are expected to know your local petrol attendant by name, but how the SUV gulps fuel, you'd swear you're driving a V8 SVR. Jaguar claims an economy of 7.7-litres/100km, but even with an extremely light foot and the driving mode in Eco, we struggled to dip below the 12-litre mark on our fuel run.

During our week-long test - which included driving in peak traffic and on the open road - we managed to cover just over 400km before having to top up the 67-litre fuel tank.
Wheels24 editor Janine Van der Post says: "To be fair though, automaker fuel averages are based on ideal driving conditions, no aircon use, and travelling at a relatively slower speed. And, one also needs to take into consideration the driver's driving style. Charlen's "light foot" could possibly be heavier than mine, for example. You'd also need to take the average speed driven into account as well - 120 - 130km/h on cruise control versus 80km/h.

"With that said, the E-Pace Sport is a stunning car. My mother has always dreamed of owning a Jaguar one day, and she could not stop staring at this one.  But, it's only a given that if you're going to fork out for a sportier model, you also need to factor in a heftier fuel bill if your driving style will match the performance dynamics of a car." 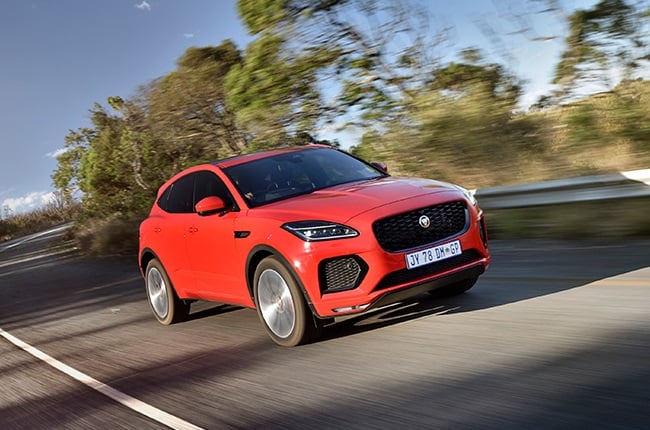 While the Wheels24 team is fond of Jaguar vehicles, the E-Pace 300 Sport is a bit of a mixed bag. On the one hand, it oozes all the traits that make Jaguars such special vehicles. This Jaguar is not a sports vehicle, but its drivetrain and the subsequent fuel economy seem to suggest otherwise.

If regular visits to your nearest fueling station are not of concern, the E-Pace 300 Sport might just fit the bill. Alternatively, any one of the diesel options or a plug-in hybrid (PHEV) model - slotting in above the 300 Sport - could provide more smiles per km.

We live in a world where facts and fiction get blurred
In times of uncertainty you need journalism you can trust. For only R75 per month, you have access to a world of in-depth analyses, investigative journalism, top opinions and a range of features. Journalism strengthens democracy. Invest in the future today.
Subscribe to News24
Next on Wheels24
REVIEW | Here are some optional features you might want to add to your Volvo XC40