• Some of its rivals include the Suzuki Vitara Brezza and Kia Sonet.

It's becoming more apparent with each new model launched these days that automakers are putting all effort and resources into a segment they know will rake in positive sales turnover.

Nissan once ruled the roost in the '90s with its slew of performance offerings. Still, the tide has since shifted - primarily due to engine emission restrictions, and the resurgence of existing automakers with their own value-for-money models.

The Japanese brand's focus has shifted from the days of going fast to what the consumers want: low fuel spend and an abundance of space, aka SUVs. While the X-Trail, Qashqai, and Patrol are good established offerings, they don't suit the pocket of most people in the market for something more affordable and smaller. Nissan launched its brand-new Magnite compact crossover SUV earlier in 2021 and it currently serves as the brand's second cheapest model (priced from R256 999) in the local line-up behind the NP200 bakkie (priced from R199 900). If you factor in the Datsun GO, it eclipses both with a starting price of R182 000.

Do you think the Magnite has what it takes to compete with what is currently on the market? Email us, or share your thoughts in the comments section below.

Right off the bat, the Magnite finds itself in competitive waters - going up against the Suzuki Vitara Brezza, Toyota Urban Cruiser, and Kia Sonet - all of which raked in 344, 591 and 133 units for the month of June, respectively. A total of 532 Magnite's found new homes during the same period - safe to say, the compact SUV segment is a hotly contested one. Besides establishing itself as a favourite pick among consumers already, the Magnite also boasts the intuitive first-in-class Nissan Intelligent Mobility, alongside functionality items like wireless Apple CarPlay and Android Auto. All models also come with a three-year or 30 000km service plan and a six-year or 150 000km mechanical warranty.

Visually, Nissan has worked wonders with the addition of J-shaped daytime running lights and a larger diaphragm front grille that creates the illusion of a floating badge, especially at night. The rear has meagre signs of Renault's outgoing Clio - though those remarks are warranted since Nissan, Renault, and Mitsubishi fall under the same banner with some design cues and technologies shared among the brands.

Crux of the matter

Much of Cape Town's weather has been cold and wet, so when the sun came out to say hello, it was the ideal setting to get a feel for the SUV on the long, windy and picturesque Chapman's Peak pass. The somewhat rare rays of the sun also warmed up to the two-tone Vivid Blue and Storm White paint job.

The Magnite only comes in Acenta and Acenta Plus trim, with the only mechanical difference being which transmission its turbocharged 1.0-litre petrol engine is paired with. Customers can choose between CVT or five-speed manual options, and the test unit, in this instance, made use of the CVT. 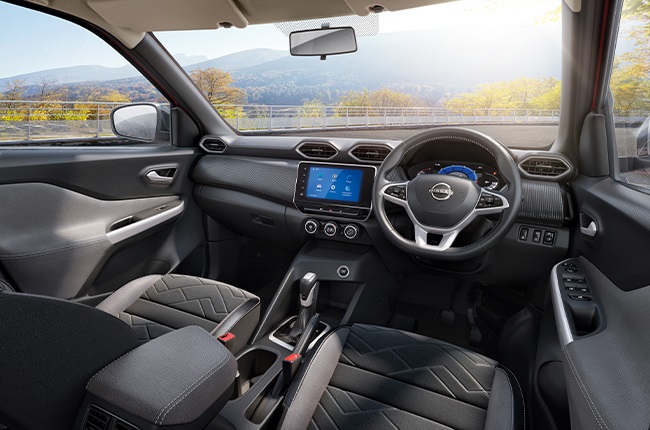 Having driven the Datsun GO CVT when it launched in 2019, I was curious to see how the same drivetrain would perform in a heavier body. Foot on the brake, pressing the engine start button and lowering the gear selector into drive, off the Magnite went. Acceleration from launch is nippy, and besides the 74kW and 160Nm power figures, the 1 014kg curb weight is a leading contributor to this.

The 'gear changes' are hardly felt when tackling quick sprints in and around the city, but when on a longer stretch of road or cruising at a low speed, one can feel the change in gear ratios from behind the wheel. An almost invisible button at the back of the gear lever initiates a 'Sport' mode on the digital instrument cluster - though it appears to be only cosmetic as it doesn't really improve performance.

As far as fuel usage goes, Nissan claims a fuel consumption figure of 5.2-litre/100km, but the best return I got was closer to the 6.0-litre mark, although the intermittent use of the aircon had a part to play in the higher fuel consumption.

Of course, no car is perfect, and the Magnite has a few blemishes which could be improved when the update comes around. One of them is the digital instrument cluster design that feels like you are staring into visuals from a Sega TV game console. In all honesty, it does the job of displaying all the essential data, but more elbow grease or a better design could make it more appealing. Wheels24's Janine Van der Post says: "Nissan has been making some good looking cars of late - just like they used to in the past. The Magnite is a refreshing new model in the local line-up and its surely a vehicle that has brought a renewed attention to the brand from buyers who would not usually think to consider it.

"The Magnite is compact, and trendy, and that CVT 'box is easy to use in daily traffic. It's also a lot more adequate on the long road. The test car we had in our Wheels24 garage recently only had over a 1000km on the odometre, but even the fuel consumption was frugal for a car that was still been driven in. We averaged about 6.2km/litre on quite a long drive on the open roads when we took a drive to Matroosburg to see if there was any snow left to show my sprog.

"We took my parents along too so the car was at full capacity but all five of us were comfortable and there was more than enough room.The boot is compact, but much bigger than you'd expect and there was space for padkos and extra clothes and an outfit for a snowman.

"The Kia Sonet came to market around the same time, and while the Korean offering might have more standard features, the two cars have been in good debates with readers, each finding favour."

Wheels24 reader Chumakwande Makehle sent us his views on the Magnite:

"The car is relatively bigger compared to its competitors so it should offer more space for passengers, and better boot space. It's rivals, namely the Suzuki Vitara Brezza, Toyota Urban Cruiser, and Kia Sonet offer less space.

"The only exterior styling contender the Magnite has in its segment is the Sonet, equally with the interior, but the Sonet seems to offer more features.

"Its claimed fuel consumption, and recorded in the article are something to brag about, purchasing an affordable SUV and not worrying that much about daily commute is an advantage.

The pricing is everything, our economy has people looking at purchase affordability and daily running costs, they'll seem to be in good standing, so consumer's have more reasons to consider the Magnite.
- Chumakwande Makehle

"I liked it from pre-launch illustrations, then saw a few outside a dealership and some on the road. It's a stunner with better presence than its three other direct competitors."

We live in a world where facts and fiction get blurred
In times of uncertainty you need journalism you can trust. For only R75 per month, you have access to a world of in-depth analyses, investigative journalism, top opinions and a range of features. Journalism strengthens democracy. Invest in the future today.
Subscribe to News24
Next on Wheels24
Porsche 911 GT2 RS: The day I drove a unicorn will be etched in my heart forever