Volkswagen's T-Cross compact SUV arrived with a bang before the world went into lockdown, and it has been selling exceptionally well since it was launched in South Africa (more than 500 a month regularly if stock isn't an issue). Some say the T-Cross is more of a crossover vehicle, and I won't argue with that, as it's a front-driver built on the Polo platform.

We spent a couple of days assessing the 1.0 TSI Comfortline version that's fitted with a five-speed manual gearbox up in Johannesburg, where the air is thin and the traffic thick. It's a gem of a vehicle - and is seriously worth considering if you've had enough of hatchbacks and small sedans, and want to move into this world of heightened driving positions and pavement pounding ability. It's still priced better than we expected

I thought the press vehicle would arrive overpriced and laced with options that you don't need. To my huge surprise and egg on face, I was shocked to see that our test car is priced at R361 500 as standard. That's not cheap, not at all, but it's well priced if you look at the 2022 Polo hatchback pricing. The T-Cross won't give you that much more useable space than the Polo, but to my eye, the SUV/crossover is the better looking of the two.

Volkswagen tastefully trimmed our Wheels24 test car in the optional R-Line exterior styling kit, and it had 17-inch Manila style allow wheels fitted to it. VW also added LED headlights from the options list, which made it look more high-tech and premium from the front, and it made driving at night such a pleasure. We also liked the optional Active Info Display in the centre cluster that gives access to a raft of driving information and the Composition Media with App-Connect and Inductive Charging pad for smartphones. We found that smaller Android devices and regular-sized iPhones just fit in the charging pad cradle, so if you run a Pro Max size device, you'll need to carry a USB C to lightning cable.

Read: Mitsubishi's new ES grade ASX might be the soft-roader right for you in 2022 Has all the features needed in a family car

The Comfortline on test proved exceptionally well-appointed, and VW  finished it in quality plastics and fabrics. Even the seats, which seemed to be made of recycled material, looked classy and were comfortable. It might seem like a little thing, but it made the driving experience much nicer; I enjoyed the electrically-operated windows all around and the fact that you can lock the rear windows with a single button from the driver's control unit. This makes it ideal if you transport children who like to play with these buttons all the time.

Speaking of transporting kids, I did the school drop-offs and pick-ups with the T-Cross, and it was so easy jumping in and out of it thanks to its decent ride height. The large, wide-opening doors also made it easy for the boys to jump out and in. We also enjoyed the reasonably decent trunk at 377 litres, which was more than enough for a monthly grocery haul and the kids' school gear.

I thought this vehicle would arrive bare-bones, with just the basics and everything coming as options, but it was nice to see that you get a decent aircon, good safety features such as six airbags and anti-lock brakes with electronic brakeforce distribution, and a multi-function steering wheel and cruise control. You can also add premium features such as lane change warning systems and blind-spot monitors if you have extra cash to spend on options. 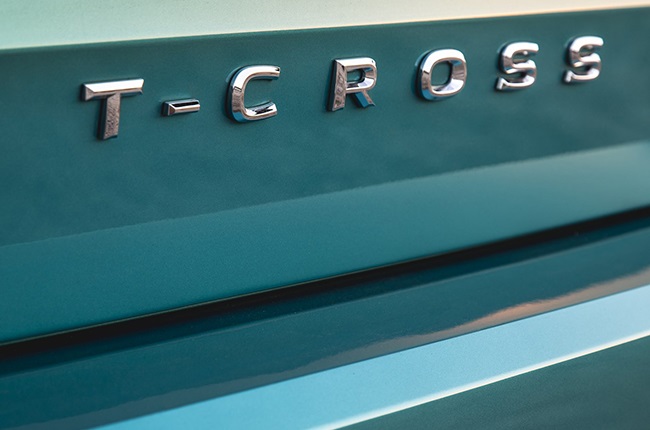 It drives like it has more power and torque

70kW and 175Nm are what Volkswagen says this model is blessed with thanks to a turbocharged 1.0-litre three-cylinder petrol engine. Driving it, though, you'd swear it had more grunt. I had to check with the fleet manager that it was indeed the right car as per the spec sheet, and it was. A more powerful 1.0-litre model is available in the line-up (85kW/200Nm), but this version with less performance proved more than adequate to run around the city and take the odd highway sojourn. I achieved 9.1l/100km in my combined cycle over five days, but that was due to lots of idling in traffic (I turned the stop-start system off as I preferred the aircon running).

The only real challenge with this T-Cross was getting used to pulling away from a standstill without experiencing turbo-lag. I found that if I gave a little too much throttle and let the clutch pop out, it would chirp the front tyres. Give it too little throttle and get it into first gear, and it huffs before the turbo spools and catches its breath. You get used to it after a few days, as I did, but I think the best solution to get around this and ensure you buy the best version of this car is to purchase one with the DSG transmission that VW has mastered.

Read: 4 Reasons why the 2021 Honda Fit Hybrid is an exceptional family vehicle to consider I'm going to take Kia's old tagline here regarding the T-Cross we had on test because it really had the "power to surprise" me. I expected it to feel a little bit cheap on the inside, but it wasn't, and I expected it to ride too firmly, but it was so comfortable and compliant. The excellent aircon, the light and accurate steering, and the easy-to-manoeuvre nature of the car all made it a pleasure to live with for a few days.

This segment is highly competitive, and you can buy some real stars now, such as the Haval Jolion or the Chery Tiggo 4 Pro, but this VW T-Cross struck a delightful chord with us, and it follows on nicely from the Tiguan we tested last year that also proved so good even though it was laden with options.

If you're in the market for a new model that can comfortably transport a family of four, swallow up luggage and return respectable fuel consumption, you have to consider the T-Cross when tyre-kicking. All models come with a three-year or 120 000km mechanical warranty and Volkswagen's three-year or 45 000km EasyDrive Service Plan.

First family car, first SUV, the replacement for your Golf or Jetta, this T-Cross will talk to you, and it will say the right thing when you drive it.

We live in a world where facts and fiction get blurred
In times of uncertainty you need journalism you can trust. For 14 free days, you can have access to a world of in-depth analyses, investigative journalism, top opinions and a range of features. Journalism strengthens democracy. Invest in the future today. Thereafter you will be billed R75 per month. You can cancel anytime and if you cancel within 14 days you won't be billed.
Subscribe to News24
Next on Wheels24
REVIEW | Cayenne Turbo GT is more hyper car than SUV, and it's scintillating at full tilt