REVIEW | Top-spec Triton takes on mid-spec Ranger FX4, but why does it not sell in SA?

• The Mitsubishi Triton takes on the Ford Ranger FX4.

• The Triton is the more affordable between the two bakkies, but fails to sell in big numbers.

• Both bakkies have similar power outputs, despite fielding engines of different capacities.

It's a bit of a funny story, but the Mitsubishi Triton is not a contender for 'best selling bakkie in South Africa'. Which is rather sad because the Triton is not a bad bakkie. And on the plus side, it drives well, and the cabin is quite comfortable.

On a recent trip to Klipbokkop Mountain Reserve between Villiersdorp and Worcester on the R43, we put the Triton up against one of its direct rivals, the Ford Ranger. But not just any Ranger, the FX4 4x4 that was launched locally earlier this year. Both bakkies have several positives counting in their favour, but there are definite differences in how each bakkie is positioned in the market.

The interesting bit between the two bakkies is that the Triton in question is the top-of-the-line double cab 4x4 automatic model, whereas the Ranger is the mid-spec FX4 double cab 4x4. Of course, there is a substantial price difference between the two, and it raises an important question: Why does a top-spec bakkie struggle to sell against a mid-tier offering?

The elephant in the room

In 2020, Mitsubishi launched a new top model Triton in South Africa. Called the Triton Xtreme, it carries an R45 000 premium over the Triton in this company. It features various cosmetic enhancements to differentiate it from the range - and the other bakkies in the local car parc. Our Triton, though, retails for R654 995 and is R57 305 more affordable than the Ranger FX4 4x4 (R712 300).

This is quite a difference and will impact the monthly instalments when finance applications for both bakkies are put through - which swings the pendulum in the Triton's favour. But one has to consider the support you'll receive from either automaker.

The Ford Ranger boasts the most extended aftersales service with a six-year or 90 000km service plan, while the Triton's covers the same distance, but only five years. The Ford also has a better warranty of four-years or 120 000km vs. the Triton's three-years or 100 000km. Considering the price difference between the two bakkies, it should give Mitsubishi some leeway for how they can best service buyers new owners. A new Triton is expected to arrive locally in a few years, and the duration of the aftersales support could be something the Japanese firm's local arm can address.

In your opinion, what are the reasons the Triton is not a strong seller in South Africa? Email us your thoughts or use the comment section below. Though power outputs are almost identical, each bakkie comes to market with a different engine approach. A few years ago, Ford launched its new 2.0-litre turbodiesel engine on its Ranger and Everest SUV. This engine, available in both bi- and single-turbo guises, powers a range of the Blue Oval's products. Ford used the single-turbo version in its Ranger FX4 where it produces 132kW and 420Nm. Power is sent to the 4x4 system via a 10-speed automatic transmission.

Mitsubishi, on the other, only has one engine powering its Triton range. The turbocharged 2.4-litre diesel engine offers 133kW and 430Nm, with a six-speed automatic gearbox channelling power to the 4x4 system. Both bakkies have six-speed manual transmissions elsewhere in their respective ranges.

Both Ford and Mitsubishi can confidently say that their bakkies are benchmark contenders for comfort and ease of driving when it comes to ride quality. Road undulations are absorbed with aplomb, while behaviour on gravel is not to be scoffed at. The Ford gets the better of the Triton in terms of steering feel, and it feels much lighter between one's hands - this despite the Triton weighing 189kg less than the Ranger FX4: 1 855kg vs. 2 044kg.

Plant the throttle, and the Ford's power kicks in quicker. This is because the full gallop of torque is available between 1 750 - 2 500rpm versus the Triton's at 2 500rpm. This means that the Triton's engine is more rev happy than the Ford's, and you become aware that the bakkie's steam runs low the higher the revs are. Interestingly, Ford's approach with the 10-speed gearbox may seem like overkill, but the extra gears aid the engine in staying in its sweet spot more regularly than the Triton.

Overall, there is little indication that the Triton can't match its American rival when fulfilling the basic bakkie requirements. Plus, its seats offer greater comfort. 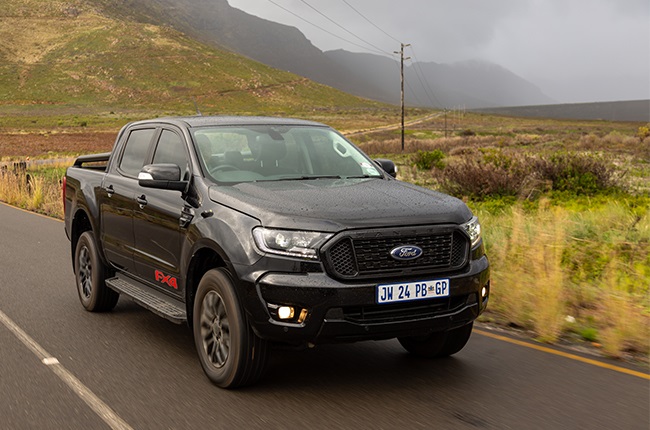 Between the two bakkies, the Triton definitely looks more butch and purposeful. The design takes on a somewhat futuristic approach, and the daytime running lights work a real charm. But it's on the inside that the Triton begins to lose ground to the Ranger, despite boasting a truly welcoming space.

The Japanese bakkie comes standard with leather seats versus the Ford's cloth and leather combination, but does away with items such as navigation, rain sensor wipers, rear fog lights, a towbar, and front and rear park distance control. It does have a rear-view camera, though.

The Triton's multimedia system is also not Mitsubishi's own - unlike the FX4 that features Ford's latest touchscreen multimedia system available to this specification bakkie - and takes away from what is a well-appointed cabin. We found this especially strange, because when the updated bakkie was launched in 2019, it was fitted with the automaker's own system The fixed paddle shifters behind the steering wheel are functional and provide a real service other than just being there for show. It brings us back to the question we asked initially: With a R57 000 price advantage over the Ranger FX4 4x4 - and even more over its direct rival from the Toyota Hilux range - why does the Mitsubishi Triton not sell in more significant numbers in South Africa? Bar the omittance of a few features and an engine that suffers from slight turbo lag, what is wrong with this bakkie?

It's capable, has good on-road dynamics, is stable under all road conditions, and has one of the best 4x4 systems fitted to any bakkie. It's a conundrum that has left many puzzled and confused because the bakkie stacks up well against the likes of the Ford Ranger FX4. The Ford, in this instance, provided the perfect measuring stick for the Triton to go up against, and the Mitsubishi did not fail. The only thing it fails is convincing the buying public to at least consider it as they search through the local bakkie market for their next buy.

Both the Triton and Ranger's all-new models are expected in South Africa in the next few years, with Ford having indicated that theirs will be revealed before the end of 2021 and launched in the local market in 2022. But until its bakkie arrives, Mitsubishi South Africa must do a heck of a lot more to get the message of the Triton across. It's not a bad bakkie. And it's why Mitsubishi should not allow it to disappear in the crowd.

We live in a world where facts and fiction get blurred
In times of uncertainty you need journalism you can trust. For only R75 per month, you have access to a world of in-depth analyses, investigative journalism, top opinions and a range of features. Journalism strengthens democracy. Invest in the future today.
Subscribe to News24
Next on Wheels24
REVIEW | Jaguar E-Pace 300 Sport is the athlete in the range, but with an Achilles heel