<b>DISCO 5 IN SA? </b> Wheels24 reader Johan du Preez spotted a large camouflaged SUV outside a Land Rover dealership in Stellenbosch. Is this the new Discovery 5? <i> Image: Johan du Preez </i>
Johan du Preez

Cape Town - An eagled-eyed Wheels24 user spotted a heavily camouflaged SUV at a Land Rover dealer in Stellenbosch in the Western Cape.

Johan du Preez posted on Wheels24's Facebook page: "I saw this well-camouflaged car in Stellenbosch this morning (January 19 2016) where it was on its way to the Land Rover dealer. Any idea what it could be?"

Du Preez sent us three photographs of what looks to be Land Rover's next-generation Discovery 5.

The images reveal a disguised SUV with a layout and styling cues that hint towards the fifth-generation of the automaker's flagship.

Beneath the camouflage, the Discovery seems to have adopted a similar front-end to the new Discovery Sport. The Discovery turned 25-years-old in 2014 and the new model uses largely aluminium architecture. Land Rover South Africa said: "Jaguar Land Rover runs a wide range of engineering and technology development programmes. We are unable to comment on the specific nature of these programmes. We have made our intention clear to evolve the Discovery family, however we have not confirmed when the current Discovery will be replaced."

The new Landy might use the firm's 'invisible bonnet' which the automaker reports uses cameras in the grille to capture data. Information is fed to the head-up display, effectively creating a "see-through" view of the bonnet and engine bay.

A large central touchscreen will dominate the centre console for the infotainment system and a laser head-up display (HUD) could feature, offering the driver important information such as speed, satnav and speed-limit warnings. 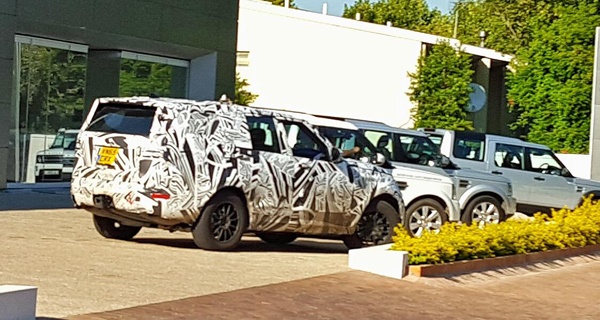 We live in a world where facts and fiction get blurred
In times of uncertainty you need journalism you can trust. For only R75 per month, you have access to a world of in-depth analyses, investigative journalism, top opinions and a range of features. Journalism strengthens democracy. Invest in the future today.
Subscribe to News24
Related Links
Latest Landy Heritage 4x4: Best-selling Freelander 1
Next on Wheels24
REVIEW | Optional Sport Pack adds value to Ford's proven Ranger XL bakkie