• The car has been spotted in Cape Town ahead of its local launch.

• The i20 has always been a strong seller for Hyundai South Africa.

Almost silently, Hyundai's new i20 has arrived in South Africa. The car looks to be a markedly different vehicle from the one it's set to replace, especially with that new-age design and the expected features list. A Cape Town dealer took the liberty of showcasing the new hatchback at a local shopping centre - less than two weeks before the car's official launch in South Africa!

The i20 has been a standout car for Hyundai South Africa over the last few years. Alongside the Grandi10, it's been raking in the sales and introducing many buyers to the Korean brand. Both first-time and established owners flock to the i20, with several 100 units rolling off showroom floors every month.

Hyundai South Africa hopes that the new car will continue that tradition, building on the success recipe of the outgoing model by offering a more comprehensive package than ever before. At first glance, one can immediately see that the new i20 is a different car from the current one. The car is visibly lower to the ground and wider, and 17-inch alloy wheels round off the look. According to measurements listed on the Hyundai News website, the roof is 24mm lower than the outgoing model, the body is 30mm wider, and the length's been increased by 10mm.

A new grille adorns the front, as well as a new design for the headlights. Unlike many other cars on the market, the new i20's rear design is just as enticing as the front. The rear lights' design continues with the sharp, edgy pattern, but an LED strip runs across the entirety of the boot. The Hyundai badge is a focal point.

It's unclear if Hyundai South Africa will avail all ten of the i20's exterior colours locally, but prospective buyers can definitely opt for the Phantom Black roof to create a two-tone style. Buyers can be confident that the new i20 will feature the latest technology Hyundai has to offer at this price point. As such, the multimedia system is Apple CarPlay and Android Auto compatible, but depending on which system buyers opt for, these two 'technological advances' can be operated wirelessly.

Hyundai also added a 10.25-inch digital cluster and a 10.25-inch centre touchscreen to the interior package. The former relays all the driving information and car updates to the driver, while the second plays home to media and other functions. The European-spec i20 features a Bose Premium Sound System. This system comprises eight speakers and a sub-woofer, but will not be available to local buyers.

In terms of boot space, it's been increased by 26L to now offer 352L of storage space. It increases to 1165L with the rear seats down. Hyundai South Africa confirmed to Wheels24 that three engine options would be available to the new i20 range, that being a 1.2- and a 1.4-litre petrol engine - both four-cylinders - as well as a new 1.0-litre three-cylinder turbo petrol engine. In Europe, this turbocharged mill is also available with a 48V mild-hybrid system, but this configuration will not be available locally.

The 1.0-litre engine is mated to either a six-speed manual or seven-speed dual-clutch automatic transmission, with top speeds rated at 188km/h and 185km/h, respectively. This engine is expected to produce around 75kW and 172Nm.

Hyundai South Africa will announce pricing and full specification for the local line-up later this month, but the car will feature Hyundai's industry-leading 5-year or 150 000km vehicle warranty and 7-year or 200 000km drivetrain warranty. 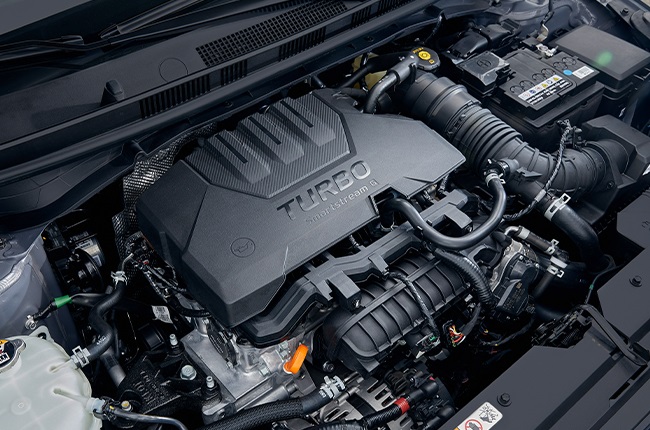 2021 Hyundai i20
Hyundai Media
We live in a world where facts and fiction get blurred
In times of uncertainty you need journalism you can trust. For only R75 per month, you have access to a world of in-depth analyses, investigative journalism, top opinions and a range of features. Journalism strengthens democracy. Invest in the future today.
Subscribe to News24
Next on Wheels24
Mitsubishi's new seven-seater Xpander has plans to ruffle feathers in a competitive market