• A second allocation of the popular GR Yaris headed for South Africa.
• There's now only one single grade available based on customer feedback.
• Addition of reverse camera and rear PDC to boost convenience on 2022 model.

Toyota has announced a second batch of GR Yaris models are en route to South Africa due to popular demand. Numbers are once again limited, so if any enthusiasts thought they had missed out completely, here's another chance to become an owner of this special car.

A few years ago, Toyota South Africa launched the GRMN Yaris. I remember how excited I was to drive it, and just how thrilled I was after getting behind its wheel. For the first time, in a very long time, Toyota had brought back the excitement of its fantastic cars. Real driver cars. The GRMN was just a taste of what was yet to come when it was announced the GR Yaris would make its way to South Africa. Initially 190 models were set to arrive, but due to the Covid-19 pandemic and other sorts of issues, the full number didn't quite get here. Launched in 2021, the Toyota GR Yaris achieved worldwide acclaim for its combination of performance, driver engagement and motorsport-infused pedigree. It's bagged numerous awards such as multiple Car of the Year and Performance Car of the Year trophies, across global markets - and it's literally became an 'overnight' motoring sensation.

Following market feedback, the line-up has been reduced to a single model, the 'top-spec' Rally variant - the more expensive one of the two initially available models.

As before, Toyota says the Rally model is equipped with a Torsen limited-slip differential on both the front and rear axle, performance-tuned suspension, revised power-steering assistance, and 18-inch BBS forged alloy wheels - shod with Michelin Pilot Sport 4s tyres.

New for the 2022 GR Yaris model is the addition of a reverse camera and rear Park Distance Control (PDC).

A 6-speaker touchscreen audio system is standard, and features Apple CarPlay/Android Auto functionality for smartphones and Bluetooth and USB inputs. 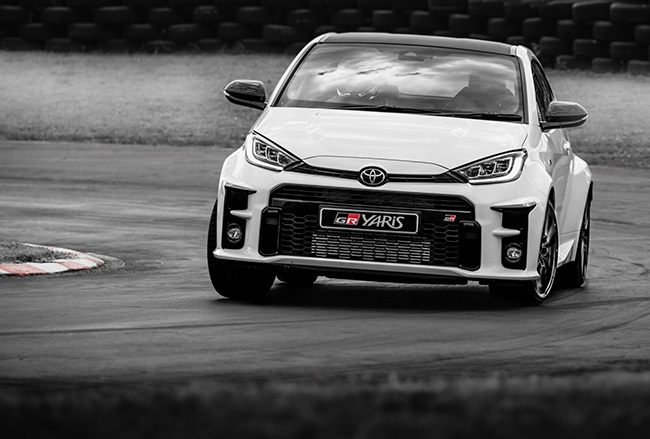 That terrific three-cylinder turbocharged unit includes multi-oil jet piston cooling, large-diameter exhaust valves and a part-machined intake port. Displacing 1 618cc, it delivers 198kW @ 6500 rpm and 360Nm of torque between 3000 and 4600 rpm. And that's really the essential deal here, why fans would splurge on a Yaris like this. This is the VW Golf GTI's enemy number one in terms of performance.

Toyota rates the fuel consumption at 7.6-litres/100km, with CO2 emissions registering 172g/km. The engine is mated to an intoxicating six-speed manual transmission, engineered to accommodate high torque levels. It features a short and light shift throw, while a motorsport-style clutch provides smooth yet solid engagement.

Its power-to-weight ratio of 0,154 kW per kg helps deliver a 0-100 km/h acceleration time of 5.5 seconds and an electronically limited top speed of 230km/h. All GR Yaris models are sold with 9-services or a 90 000km service plan (intervals set at 10 000km) and three-year or 100 000km warranty. Customers can also purchase various service and/or warranty add-ons at their local dealership.

If you've ever driven an older Toyota, you'd know what we're talking about over here. But to put the popularity, or rather high demand of the GR Yaris into context, Wheels24 published a story about reader Steven Darge who had put down a deposit for a GR Yaris without even knowing the full purchase price at the time.

Darge told Wheels last year: "December 2020 rolls around, and finally, the news breaks publicly that the GR Yaris was coming to SA. My name's on the list, says Francois (the salesman), but orders aren't open yet. Come 5 February 2021, and I happened to send him a message saying that I'd seen lots of activity online about the GR Yaris and wanted to know if he'd found out more about it.

"On 10 February, I paid a deposit, not knowing how much the GR would cost. On 15 March, Francois frantically called me to say the order book had opened: "What colour do you want? Are you getting the ordinary car or the Rally? I need to know now. Lots of people are asking about it. I don't think you'll get one if you don't tell me today."

"Of course, there was only one route: a Rally-spec car in red. How could you not want a four-wheel-drive, limited-slip-diff equipped Yaris? And why red? Well, I thought the GR could be a homage to the car which lit the flame of my love for the motoring world - my red Corolla RSI."

We live in a world where facts and fiction get blurred
In times of uncertainty you need journalism you can trust. For 14 free days, you can have access to a world of in-depth analyses, investigative journalism, top opinions and a range of features. Journalism strengthens democracy. Invest in the future today. Thereafter you will be billed R75 per month. You can cancel anytime and if you cancel within 14 days you won't be billed.
Subscribe to News24
Next on Wheels24
New turbocharged Sonet is the one Kia SA has been waiting for, and with good reason