• The GP features the most powerful version of Mini's two-litre turbo motor with 225kW and 450Nm.

• Only 38 units were shipped to South Africa and have all been sold.

The hot hatch game has moved faster than the Mercedes-AMG A45 S 0-100km/h sprint time. It's 3.9 seconds, for the record.

The power war between carmaker's such as Audi, Mercedes, Volkswagen, BMW, Honda, and Renault is brilliant to cover as a motoring journalist.

Back in the mid noughties , the V8-powered B7 Audi RS4 and BMW's E92 M3 produced the same amount of power the A45 S produces today. It's completely mind boggling to drive a hatchback with 310kW and feel how far the goalposts have moved in the last decade.

Squeezing lots of power from a forced induction engine is one way of going about things, another way is building a stiff, lightweight driver's car that enthusiasts can use at track days.

That brings us onto the Mini's John Cooper Works GP. Shown to the world at the Los Angeles motor show in 2019, the GP is a two-seater hot hatch with a focus on lightweight construction, torsional stiffness and aerodynamics. In other words, Mini has built a proper driving machine. Not something to brag about around the braai or post videos on Instagram showing off vrrphaa.

The GP lapped the famed Nurburgring Nordschleife in under eight minutes, close to 30 seconds faster than the previous GP.

There are only 3000 units in the world and feature the most powerful version of the carmaker's 2.0-litre turbocharged engine. It sits 10mm lower to the ground compared to the JCW model and features a unique GP mode. Mini claims the GP takes just 5.2 seconds to reach the 100km/h courtesy of it four-cylinder turbocharged engine with 225kW and a maximum torque of 450Nm. It boasts a top speed of 265km/h.

The concentrated energy reaches the front wheels fitted with model-specific high-performance tyres via an eight-speed Steptronic transmission which, complete with integrated differential lock. Mini says under load demand, it is possible to generate a locking effect of up to 31%. In GP mode, activated by means of a toggle switch, the intervention thresholds of the Dynamic Stability Control (DSC) system are also increased to give the driver even more scope when approaching the limit range.

All that power means the GP needs strong brakes to handle the forces thrown at it. The braking system comprises of four-piston fixed-caliper disc brakes on the front wheels and single-piston floating-caliper brakes on the rear wheels.

The front calipers are made of aluminium and combined with 360x30mm ventilated discs and the GP has a dry weight of 1190 kilograms.

Mini SA has shipped just 38 units from the Oxford plant in the United Kingdom, and the GP ain't cheap. At R808 488 it is the priciest Mini on sale. The bad news is, they've all been sold according to a local report.

The only thing I can advise is to start trawling the classifieds or Mini forums, and cross all your toes and fingers if you're looking to pick up a used model sometime in the close future. 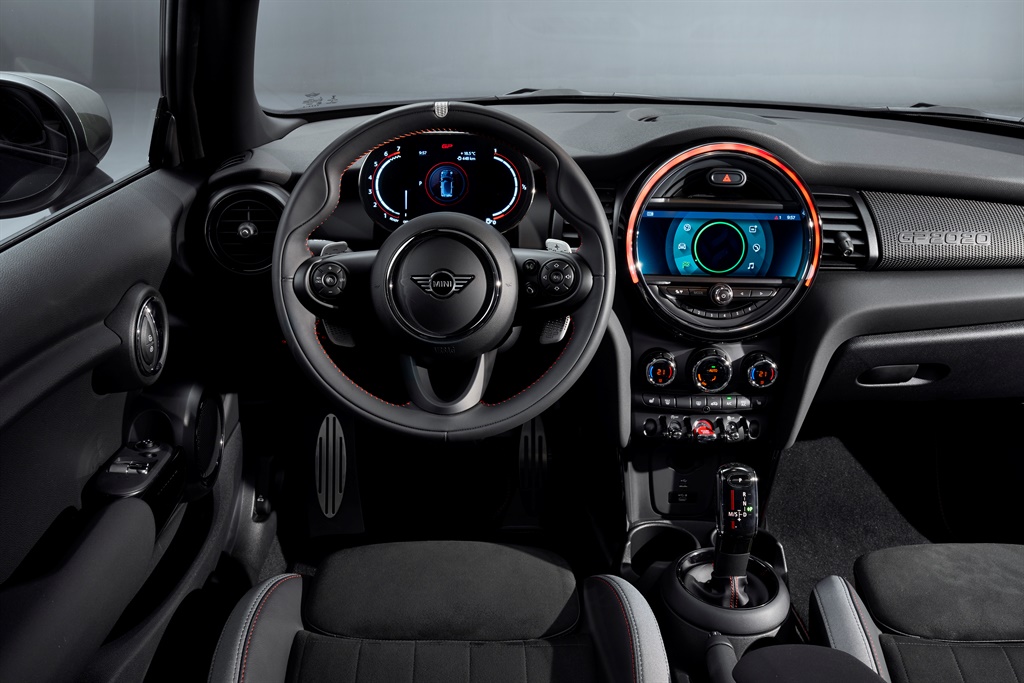 We live in a world where facts and fiction get blurred
In times of uncertainty you need journalism you can trust. For 14 free days, you can have access to a world of in-depth analyses, investigative journalism, top opinions and a range of features. Journalism strengthens democracy. Invest in the future today. Thereafter you will be billed R75 per month. You can cancel anytime and if you cancel within 14 days you won't be billed.
Subscribe to News24
Related Links
WATCH | Mini's powerful GP takes on the Nürburgring Nordschleife
SEE | Authoritative and potent - These are the most powerful 2.0-litre engines in SA
Next on Life
Toyota SA takes another page from Suzuki’s book with affordable new Vitz city car