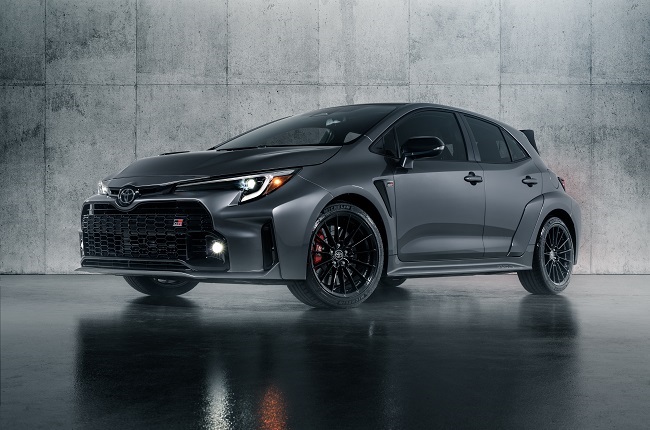 • The GR Corolla's turbo three-cylinder engine produces 224kW and 370Nm of torque.
• The Supra and Yaris are Toyota's other performance derivatives available in SA.
• Local availability is yet to be confirmed.
• For more motoring stories, visit Wheels24.

South Africa has long been starved of a Corolla body shape that was fast. The E110 chassis in RSI/RXI trim represents the last time, with Toyota preserving the nameplate for affordability and reliability in later generations.

Since its birth in 1966, the Corolla has evolved throughout its generations into a variety of sedans, wagons, hatchbacks, and SUVs to meet customers' changing lifestyles over time. The GR Corolla sprang to life based on the strong desire of Toyota president Akio Toyoda, aka Morizo, to "bring back a Corolla that captivates our customers".

With emissions getting stricter and most automakers moving toward cleaner driving, Toyota is pushing the performance envelope with the debut of its latest creation - the GR Corolla. Over the years, it has become common knowledge that any model with the 'GR' letters affixed to its rear is fast and comes packed with power.

READ | Toyota confirms hot GRMN Yaris, but South Africans may not be too pleased

The Supra and Yaris serve as the country's only performance derivatives on sale in SA. The brand also confirmed that the all-new GR86 would be making its way to SA, but local availability would only be confirmed later in 2022. Let's cross all our fingers and toes that it does come our way.

Developed jointly with Subaru, the sports car is now powered by a 2.4-litre petrol engine and does away with the 2.0-litre mill found in the outgoing model. According to the Japanese brand, the GR86 can clear 0-100km/h in 6.3 seconds. The introduction of the GR Corolla version would further reinforce the Japanese brand's performance envelope on local soil. The hot hatch is scheduled for launch in Japan in the second half of 2022, though Toyota South Africa is yet to confirm its local availability. It would undoubtedly be sized up against the latest generation Volkswagen Golf R (with power figures of 235kW and 420Nm of torque) – that will arrive locally in the second quarter of 2022.

The GR Corolla shares several underpinnings with its Yaris sibling. It uses the turbocharged 1.6-litre three-cylinder engine found in the GR Yaris (that produces 198kW and 360Nm), though its performance has been tweaked to generate a maximum output of 224kW and 370Nm. Power is also sent to all wheels via the GR-FOUR 4WD (that also comes with three selectable driving modes) system via a six-speed manual transmission and in a chassis that weighs just 1 475kg. Just like the Yaris, it features an aggressive front bumper (with GR badging) and wider front (20mm) and rear (30mm) fenders. Also new is a triple exhaust layout in the rear, while the MacPherson strut and double wishbone suspension communicate with the road via gloss black 18-inch cast alloy wheels. Stopping power is taken care of by ventilated brake discs (4-pot in front and two at the rear). The latest active safety package, Toyota Safety Sense, comes standard.

Judging by how well the Yaris derivative flew in SA – they've sold out all their models locally until 2023  – there is every indication that its four-doored sibling will follow the same sales success.