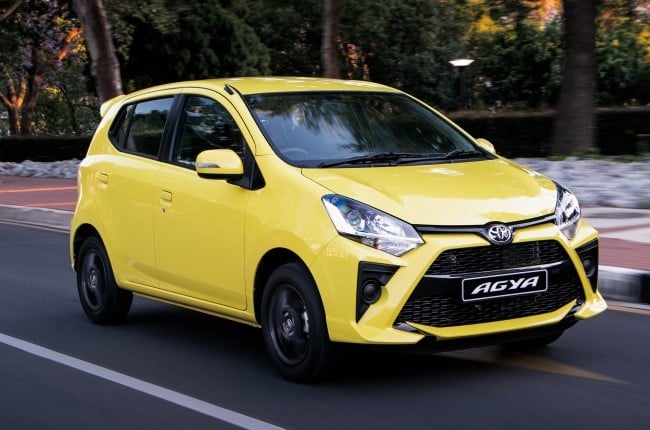 • It's based on a Daihatsu Ayla and built in Indonesia. Its 49kW and 89Nm are derived from a 998cc engine.

There's a new cheap car in town, and it's from a brand we all know and love. The Toyota Agya might sound like an awkward name, but you'll be seeing a lot of them on the road.

The Agya replaces the Aygo and Etios to offer the cheapest Toyota in South Africa at R178 600. The diminutive model is aimed at first-time buyers, and competes directly with the Datsun Go and Renault Kwid.

We test drove the newcomer briefly down in the Western Cape, and discovered beneath the niggles, such as small seats that don't move back far enough and a non-adjustable steering wheel, it's still a good little car.

For the record, Toyota has fitted the Agya with an anti-lock braking system, electronic brakeforce distribution, and two front airbags as standard no matter which model you opt for.

The engine and gearbox

The five-door hatchback isn't a brand new car, it's a rebadged Daihatsu Ayla built in Indonesia. The 998cc engine is tiny but has enough oomph when revved (peak power is reached at 6000 r/min). The little three-cylinder produces 49kW and 89Nm and performed well on the drive from Camps Bay to Noordhoek.

A particular delight is the five-speed manual gearbox that has a quick, positive shift action. The stop-start traffic in the city allowed to get a good grip of the clutch and because the Agya is aimed at first-time buyers, I can attest to its ease of use. There is a model fitted with a four-speed automatic gearbox, priced from R192 500.

The one ink stain is that because I'm close to 1.9-metres tall, and the steering wheel isn't height adjustable as well as the seats, my left leg was perched against the bottom of the steering column, hindering the driving experience. 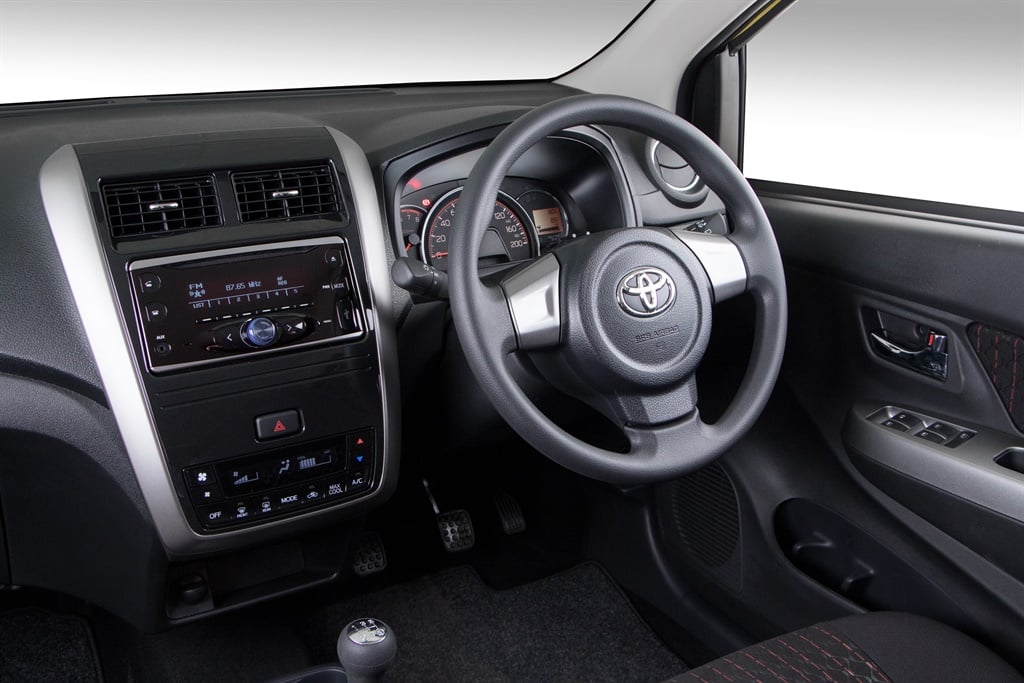 On the return journey we ventured onto the highway and immediately it became apparent that a sixth gear is needed. The engine revving at over 4000r/min in fifth at the national speed limit isn't ideal. It also creates quite a buzz in the cabin.

Compared to my driving colleague, who is significantly shorter than me, our experiences were vastly different.

I've kept the best part of the drive for last: the Agya's steering feel. This little budget car has heavily-weighted steering that gave oodles of confidence over Chapman's Peak drive. The power steering is devoid of any artificial lightness that many city cars feature.

Because it doesn't have much power, I could chuck it into corners with gusto and its 14-inch wheels didn't even let out a tyre squeal, and the brakes do a fine job of applying good progressive feel.

The fit and finish of the cabin is good for an entry-level car. The one I drove was fitted with an audio system that has a CD player (really?), USB, Aux, and connectivity to Bluetooth.

It also has Toyota Connect that can be accessed via the MyToyota App. All in all, I was impressed by the little Agya, it replaces the Aygo and should certainly be on first-time buyer's car lists.

We live in a world where facts and fiction get blurred
In times of uncertainty you need journalism you can trust. For 14 free days, you can have access to a world of in-depth analyses, investigative journalism, top opinions and a range of features. Journalism strengthens democracy. Invest in the future today. Thereafter you will be billed R75 per month. You can cancel anytime and if you cancel within 14 days you won't be billed.
Subscribe to News24
Related Links
Toyota's cheapest car is here: Meet the new Agya
Volkswagen T-Roc, Toyota Agya: New models of the week
Here's why the Suzuki S-Presso is a justifiable budget-beater in SA
Next on Life
SEE | Here are the 21 finalists for SA's 2023 Car of the Year competition