Cape to slash all speed limits 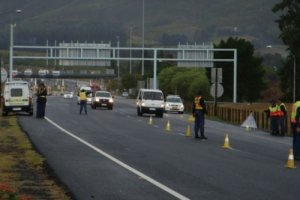 Cape Town - A blanket 10km/h reduction on all speed limits is being planned for the Western Cape - including towns, which means the basic urban speed limit will be 50km/h!

The Western Cape Provincial Road Traffic Bill has been published in the Provincial Gazette and is open for public comment until September 20 2012.

The move would mean a maximum speed of 110km/h on open roads; all other limlits would drop by 10km/h.

In addition the minster. Robin Carlisle, wants 40km/h and 30km/h zones near shops, schools and areas of "high pedestrian concentration".

Carlise said: "The carnage on our roads is an issue that affects us all. The distinction between driver, passenger or pedestrian becomes non-existent as we all bear a shared responsibility to ourselves and others."

Regulations already being drafted include the banning of "blue lights" for VIP transport as well as the law forcing powered vehicles to stay at least 1.5m from a bicycle rider while overtaking.

Blue light convoys have repeatedly been involved in fatal crashes throughout South Africa and Carlisle has stated: "This will no longer be tolerated."

As a result blue lights may not be used, except in the case of a confirmed threat to the life of the VIP.

A new regulation proposing the mandatory use of child restraints, seat belts and rear and forward facing child seats is being considered. The call for a ban of shared seating.

Harsh penalties for non-compliance will be applied as well as an additional offence of reckless behavior with child passengers. Carlisle is also called from a ban on overtaking stationary school buses or other child transport.

Passengers not wearing a seat belt will be fined "personally" rather than the offence resting on the driver's shoulders.

The public is encouraged to submit written or e-mail comments on the bill before September 20th.

Share your views on the proposed bill in our Readers Comments below or email us and you could have your thoughts published on Wheels24.

We live in a world where facts and fiction get blurred
In times of uncertainty you need journalism you can trust. For only R75 per month, you have access to a world of in-depth analyses, investigative journalism, top opinions and a range of features. Journalism strengthens democracy. Invest in the future today.
Subscribe to News24
Next on Wheels24
Driving with J9 | Don't wait too late - Extended hours for Gauteng driver licence renewals