Should you drive a 'green' car? 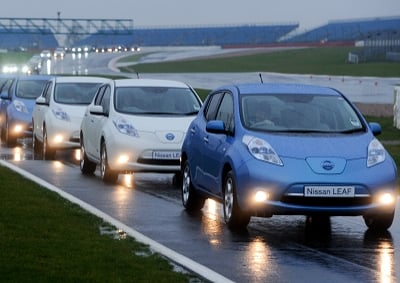 <b>NISSAN STRUGGLES TO TURN A NEW LEAF:</b> Only 989 Nissan Leafs were sold in the US in 2012 far below the automaker's targets.
DETROIT, Michigan - The green car market is hobbling along in the USA, hampered by high prices and a limited choice on batteries vehicles. Automakers believe their time will come...

Dave Sergeant, a vehicle analyst with JD Power, said: "Everybody thinks that everybody else should be driving a green car."

Automakers have launched a host of hybrid and battery vehicles in recent years with huge fanfare in response to political pressure from the Obama administration to improve fuel economy but green vehicles are still struggling to find their market.

'TERRIFIED BY THE RANGE'

This is perhaps why they are not a prominent part of the 2013 Detroit auto show, where luxury brands, big bakkies and performance vehicles dominate.

Jesse Toprak, an analyst with TrueCar.com, said: "It's getting better every year but there's a very slow adoption rate."

Hybrids have overcome initial fears many consumers had about their reliability yet few are willing to switch to battery or hydrogen fuel-cells.

Sergeant said many drivers believe alternative energy vehicles could leave them stranded on the side of the road if they get too far from a filling station or power socket.

He said: "Consumers are terrified by the range (distance) issue."

Global sales rose 20%, way below Nissan's target of a 50% increase.

Sergeant said: "Unless petrol prices go up to five or six dollars a (US) gallon we don't see a major shift. There will be a very slow drift towards these vehicles but it's going to be very gradual."

He said US vehicle owners had become accustomed to petrol at around $3.25/gallon (3.785 litres).

Automakers expressed confidence in the green cars on show in Detroit.

Toyota dominates US hybrid sales with its Prius and claimed 70% of sales.

The automaker's US chief Jim Lentz said: "There's no question that, over time, the price of fuel is going to go up. We're confident that our plan to develop hybrids is the right long-term play, as is our foray into extended-range plug-ins."

The Prius is the best-selling car in Japan and achieves US volumes most mainstream brands dream of with a figure of 236 000 in 2012.

Hybrid versions of Toyota's top-selling Camry and Highlander, as well as its luxury Lexus brand, made up 16% of the Japanese automaker's US sales at more than 327 000 in 2012.

Despite an outsized investment in advertising of green cars, which can create a "halo effect" for the whole brand without necessarily leading to sales, Toprak said automakers have not done enough to explain the benefits of hybrids.

Will green cars eventually surpass fossil-fueled rides or is the switch merely a pipe dream for automakers? Email us and we'll publish your thoughts or share your views in our Readers' Comments section.

Follow the Detroit auto show with Wheels24 on our Detroit show section.

We live in a world where facts and fiction get blurred
In times of uncertainty you need journalism you can trust. For 14 free days, you can have access to a world of in-depth analyses, investigative journalism, top opinions and a range of features. Journalism strengthens democracy. Invest in the future today. Thereafter you will be billed R75 per month. You can cancel anytime and if you cancel within 14 days you won't be billed.
Subscribe to News24
Next on Wheels24
Driving with J9 | Don't wait too late - Extended hours for Gauteng driver licence renewals