• The car is still on sale in the South African used-car market.

• The Focus RS is powered by a 2.3-litre turbo engine.

When someone asks you which hot hatch is your favourite, chances are that you'll most likely drift your answer towards the Volkswagen Golf GTI or Golf R. And why not? These are two of the hottest hatchbacks on sale in South Africa, and their respective reputations have withstood the test of time. As a safe, logical choice, I'd probably also put my stamp of approval on one of these to Golfs.

But perhaps that's where the problem lies: with logic. Well, for me, at least. I believe that a hot hatch should be exactly that - hot - and not try and wrap the experience in a bed of cotton. That's why, to this day, I rate the experience with the Ford Focus RS so highly. The car might not be on sale in South Africa anymore, and Ford announced that they have no plans for a new iteration of its revered hot hatch.

Sadly, this will not appease RS aficionados, but at least there are several units for sale in the South African used-car market. 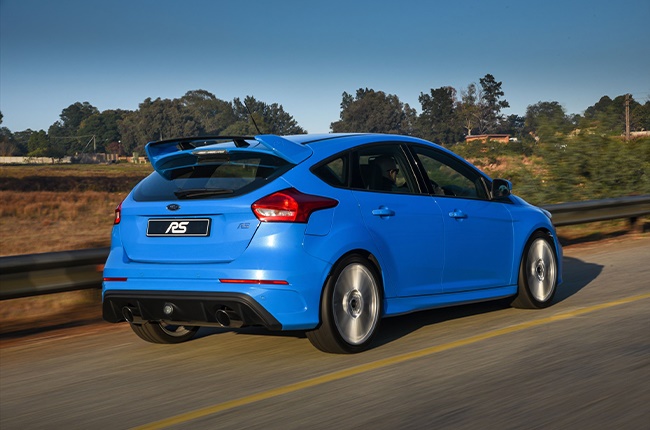 AutoTrader has you covered

Paging through the AutoTrader website, we came across several examples of the hottest hatch Ford had launched in South Africa, yet. Ranging between 2016 and 2017 model years, the most affordable option of the five retails for R494 900. While this does look like an eye-watering price, we must remember that the Focus RS is a highly sought-after vehicle - making it an instant classic and a hit among collectors. Pricing on the listings page goes up to R599 950.

One of the Focus RSs that popped up on the search had only covered 28 000km. This 2017 model would have, on average, covered around 7000km annually, which means that it's been rarely driven. The unit with the highest mileage is also a 2017 model, but with 60 000km on the clock.

Do you think the Ford Focus RS was a proper hot hatch in the South African market? Email us with your thoughts.

The Wheels24 team is adamant that the Focus RS is one of the best hot hatches we had ever seen in South Africa. The car thrilled and excited with every drive and left you wanting for more. Despite fuel consumption not being its strongest suit, this was/is a driving experience you don't mind splurging on.

We live in a world where facts and fiction get blurred
In times of uncertainty you need journalism you can trust. For 14 free days, you can have access to a world of in-depth analyses, investigative journalism, top opinions and a range of features. Journalism strengthens democracy. Invest in the future today. Thereafter you will be billed R75 per month. You can cancel anytime and if you cancel within 14 days you won't be billed.
Subscribe to News24
Related Links
SEE | This mega-Ford fan owns all three generations of potent Focus RS cars - Here's which one is...
Next on Life
SEE | Driving down memory lane with Mrs Wessels' 2000GT: Toyota SA's rare car restored 40 years later