Wheels24 contributor Stuart Johnston gets driven around by 86-year-old Adrian Gray. The Lotus 7 replica's driver had built it from scratch in his garage only a couple of years ago.

Being driven around a leafy Jozi suburb by an 86-year-old gentleman is not an everyday experience for most people. What made this one extra-ordinary was that the car we were in was a replica of a Lotus 7 that this driver, Adrian Gray, had built from scratch in his home workshop only a couple of years ago.

For more than 40 years, Adrian has been designing ultra-heavy trailers for trucks, including devices for transporting mega-engineering marvels such as giant water pipes and the like. The kind of rigs you see on the road where cars are placed ahead and behind with flags and flashing lights to warn you that the load being transported ahead is Gulliver-size in terms of scale and mass, and you are from Lilliput. So, when Adrian's client base shrunk to the point where he had extra time on his hands about six years ago, he decided to build something for himself when most people his age would be contemplating what fleecy-lined woolly slippers to pull on that day in front of the fireplace.

He got hold of a book with rudimentary plans detailing "how to build your own sports car", and the rest, as they say in adventure novels, is history! Being a designer and fully conversant with the latest computer-aided programmes meant that he could transfer the ideas from the book onto his computer and come up with a Lotus 7-like design that was uniquely his own.

Part of the reason for making changes to the original plans in the book was that the venture was to be a partnership with his stepson, Kieran, to build and own the car. And compared to Adrian, Kieran is a big man, weighing about 120kg, and he had to fit into the car. Kieran, it should be mentioned, did most of the "heavy lifting" side of the project. But the design, engineering, and most of the mechanical fettling were down to Adrian. At first glance, you can see that Adrian's car is a shade wider and longer than the average Lotus 7 replica, built by the likes of Birkin and the famous Caterham 7. Caterham of England bought the rights to the original Lotus 7 car from Lotus founder Colin Chapman a couple of decades ago.

Adrian said the differences weren't huge, a couple of millimetres in critical areas. But if you have ever squeezed yourself into a Birkin, you know that those small amounts of extra width and length make a huge difference, especially for someone more than 1.8 metres tall. Adrian made lots of use of threaded steel rods to achieve perfect alignment of his self-made components.
Supplied

Adrian started with lengths of 25mm square tubing, with a thickness of 1.6mm, to lay out the basic floor plan of the chassis. He drew out the chassis design on a large sheet of reinforced plywood and then added wood fillets to create a jig for the tubes to be laid out.

Once correctly lined up, Adrian arc-welded the chassis platform together to form the base frame. From there, he added the upper sections of the frame, with plenty of triangulation to provide rigidity and strength. Constructing one of the front wishbones
Supplied

"I arc welded the chassis, but the safety-critical components, such as the suspension wishbones, I sent out to have them TIG welded," he pointed out.

In creating the wishbones, Adrian again used jigs made of smaller wood platforms with small blocks for guides. He adjusted the angles using clamps and threaded steel rods until the dimensions were absolutely perfect before welding began. The major suspension components for this car are double wishbones at the front, and four-axle locating links at the rear, sprung by four coil-over spring-shock units, which are adjustable to give a perfect ride height at each corner. The Lotus replica uses a Ford Cortina back axle and a Ford Sierra 5-speed gearbox.

Do you have a car story to share with us? Please email the editor via feedback@wheels24.co.za and we'll publish your story.

The wheel hubs and brakes were sourced from a late-model Cortina. The steering rack used was a brand new Mk II Ford Escort item. Adrian said he was proud that all the steering geometries on the assembled car were correct, enabling him to release the steering wheel at speed. At the same time, the little Lotus continues to track straight and true. The wheels, fitted with narrow-section high-profile tyres, are inexpensive aftermarket alloy wheels. The engine is a Toyota 4A-GE 20-valve unit, as used in the Toyota Corolla RXi performance model of a couple of decades ago. The 1.6-litre fuel-injected motor needed an aftermarket computer box to manage the ignition and fuel-injection requirements, which was provided by the Dicktator performance system. Ignition specialist Henry Kruger from Benoni provided the expertise in setting up the system.

Incidentally, Adrian did all his own wiring on the car and elegantly re-routed a lot of the water-piping between the radiator and the header tank mounted up against the scuttle between the engine compartment and the cockpit. 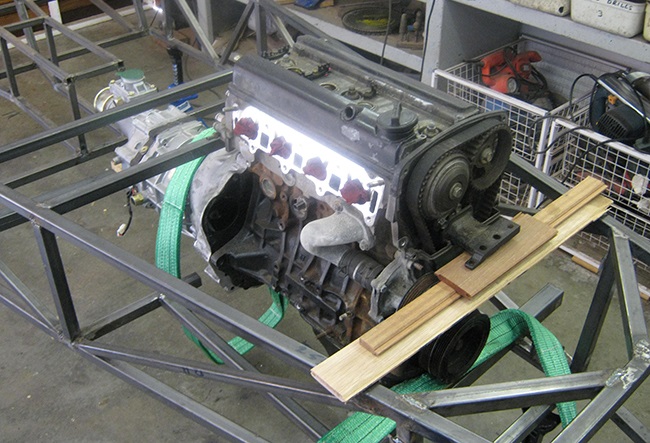 Adrian also designed his own radiator, which Silverton Radiators expertly constructed. Silverton also welded together the aluminium fuel tank that Adrian designed, located in the tail section behind the cockpit.

The bodywork was formed by Adrian, primarily of aluminium sheet, while some of the sections are in fibreglass. He also designed and made the seats himself, which a specialist then upholstered. These seats are wide enough to accommodate much larger people than is usually the case in a Lotus 7 replica. All set to go for a raucous trip around the suburbs.
Supplied

I really enjoyed my tour around the suburbs that border the western side of Bryanston. At the age of 86, Adrian's movements on the steering wheel, throttle, gear change and brakes are precise and un-hurried. He occasionally gave the little 120-plus kW motor a blast in second gear but confessed he didn't often let the engine rev to its red line, which is close to 8500rpm.

I could see and feel Adrian was an expert driver, and he told me that as a young man, he competed in the 1961 and 1962 Kyalami Nine Hour races – first in an Austin A40 and then in an Alfa Giulietta. His co-driver in the 1961 event (the first ever Nine Hour held at Kyalami) was the famous BMC engine tuner George Armstrong of A&G Conversions. When Adrian was much younger, he actually worked in partnership with Armstrong to produce inlet and exhaust manifolds and modified cylinder heads and camshafts for the burgeoning performance market of those times. When I enquired more deeply about the Alfa Giulietta he drove in the 1962 Nine Hour, it was with a chill that I realised I had been aware of Adrian Grey's exploits when I was a young boy. The January 1963 Car Magazine carried a picture of a battered Giulietta which completed the event despite a roll-over in the Kyalami' Esses in the race's first hour. This captured my imagination as a tale of true heroism, nursing a damaged car through to the finish for eight hours.

I used to lie in bed making car noises and pretending I was piloting that hard-done-by Giulietta to the finish line. Actually, I still make a passable Mazda RX2 Rotary impression, which causes my Jack Russell Terrier to try and attack me.

Adrian confessed that this indeed was the Alfa Romeo he drove, adding that it was the car's owner who had rolled the car. After my interview, I went through my old copies of the car, and sure enough, in the January 1963 edition, there was the picture I remembered so well of the Alfa in question, listed as the "Christie-Grey" car. As often happened, people mistakenly spelled his surname with an "e" instead of an "a". Thinking back on my time spent with Adrian and his Lotus replica, the overall feeling I had of the car was that it rode and handled beautifully, that the finish was excellent and lacking in unnecessary frills – just what you'd expect from a man who has spent the past four decades designing ultra-heavy duty trailers that have to work perfectly and withstand undue physical forces.

It was also fitting that one of the drivers of that battered Alfa that I had so admired back in 1963 was still going strong at the age of 86, and on days when the weather was fine, driving his self-built sports car with all the skill and finesse that you'd expect of a man who could nurse a badly damaged car around Kyalami for eight hours and finish the race!

We live in a world where facts and fiction get blurred
In times of uncertainty you need journalism you can trust. For 14 free days, you can have access to a world of in-depth analyses, investigative journalism, top opinions and a range of features. Journalism strengthens democracy. Invest in the future today. Thereafter you will be billed R75 per month. You can cancel anytime and if you cancel within 14 days you won't be billed.
Subscribe to News24
Next on Life
PICS | From road trips to their wedding: These 1970 Mazda F1000 bakkie photos tells a life story