Retro road test: Sure we have the X-Class in SA but the Mercedes E-Class bakkie is one for the ages 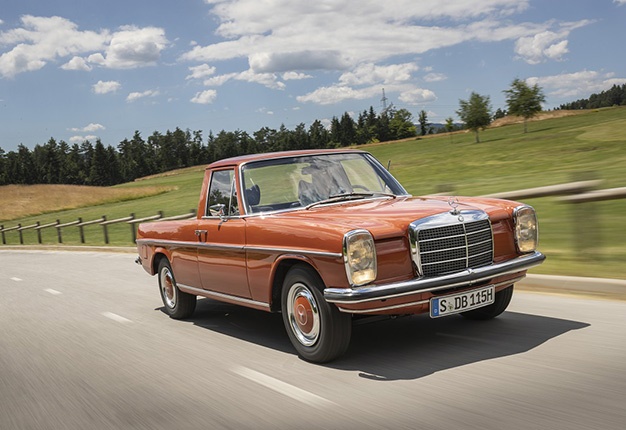 "Before X-Class there was a single-cab E-Class," writes Lance Branquinho as drives a priceless Mercedes-Benz bakkie icon.

There are few brands that can rival Mercedes-Benz sheer spread of heritage and diversity of classics.

From its original car in 1886, to its iconic 1955 Gullwing and AMG’s pending Project One hypercar, the Stuttgart star is where it starts and ends for much of the automobile’s history.

Bakkies are not a classification often associated with Mercedes but with the launch of its X-Class, the automaker has altered that perception. Curiously, for those automotive enthusiasts with obsessive knowledge, X-Class was always more of a continuation, than a beginning of all things bakkie-related for Mercedes.

READ: 10 things you need to know about the Mercedes-Benz X-Class in SA

One of the most forgotten vehicles to ever be marketed by Mercedes was La pick-up. An idea conceived not in Germany but Argentina – a market very similar to our own in terms of terrain and an obsession with all things bakkie.

La pick-up is a W115 single cab and some engineers at Mercedes commercial vehicles have lovingly restored one of these 1970s icons to concourse condition.

I was privileged enough to drive it on a recent X-Class event in Europe and from a South African bakkie perspective, it orbits in a realm of coolness which nearly defies description. In 2018 we assume the rise of V6-powered German double-cabs is a sign of the bakkie market maturing and finally offering products which are commensurate to the demand of customers who want all those passenger vehicle attributes, with some heavy load carrying ability.

La pick-up is evidence that the Argentinians who assembled about 6000 of these W115 bakkies in the 1970s, were comprehensively ahead of this trend.

Scroll through the pics below:

The loadbin’s shaping and integration to the W115’s overall proportions are so seamless, it appears a natural evolution of the sedan’s design and even 40 years after it was built, La pick-up still very easily turns the eye. I could only imagine the riot for Instagram compositions you’d cause if one of these were parked at a popular public venue in South Africa.

Has it aged well?

What's it like to drive? Embarrassingly, it took me a while to get it going. La pick-up is powered by a 2.2-litre naturally-aspirated diesel engine, with exceedingly humble outputs of 50kW and 125Nm. I expected a turn of the ignition key would get a glow plug confirmation light to illuminate, but no. You pull a toggle-lever, which could easily be mistaken for a choke, then pull it harder, and finally, the four-cylinder compression ignites into life.

The cabin is classic W115 sedan luxury and with a four-speed automatic transmission, it’s terribly easy to glide off. Due to its value (virtually priceless in fully-restored condition), I ambled along, but at low speeds, the engine felt remarkably smooth and unbothered. This particular bakkie was bought from a private owner, after originally finding its way to Germany as a lubrication support tender for the Stuttgart railway company.

What would have been

In a world of insular and algorithmic driving experiences, the W115 bakkie is delightfully mechanical: its steering requires perpetual correcting and despite the design’s age, ride quality is amazing. After my brief drive in this godfather of all things X-Class, I did ponder what an authentic E-Class bakkie of 2018 could be? Something which substitutes a bit of the E-Class dynamic competency for carrying capacity and off-road ability, whilst retaining its monocoque construction – for comfort.

The W115 was a solution of necessity. Argentina’s growingly paranoid government had banned the importation of bakkies and for a market which had substantial demand, Mercedes-Benz’s only workaround was to deliver parts and allow local experts to fashion what would become La pick-up.

In the fullness of time, it has achieved a deserved status as one of the most iconic bakkies ever built and La pick-up proved every bit as good to drive, and experience up close, as one had hoped.

The W115 bakkie was a perfect combination of luxury and workhorse automotive engineering attributes, showing how adaptable those classic Mercedes-Benz sedan platforms once were. An inspiration for a contemporary W212 double-cab? One can dream…

We live in a world where facts and fiction get blurred
In times of uncertainty you need journalism you can trust. For only R75 per month, you have access to a world of in-depth analyses, investigative journalism, top opinions and a range of features. Journalism strengthens democracy. Invest in the future today.
Subscribe to News24
Related Links
DRIVEN: Mercedes-Benz performance X-Class V6 – the most expensive, powerful Merc bakkie yet
Mercedes-Benz unleashes new 190kW X-Class V6: Here's all you need to know about the most powerful...
Next on Wheels24
How one man brought about a special South African-built Alfa Romeo Giulietta 40 years ago