Can you do your driving license test in an electric car in South Africa? • South Africa is experiencing an influx of electric vehicles.

• With this, can South Africans complete their driving licence tests with an EV?

• We explain what you should know about EVs and the K53.

There's little doubt the next major change coming to the South African automotive landscape will be driven by the rise of new-energy vehicles, more importantly, battery-electric cars (BEV). In fact, the electric vehicle (EV) revolution is already well underway, with a raft of new battery-powered vehicles having recently touched down on local soil, and yet more appearing on the horizon.

However, there is still an element of mystery - and indeed some confusion - surrounding these vehicles. As George Mienie, AutoTrader CEO, electric car (EV) owner and one of the leading local thought leaders on the subject of EVs, explains: "Myths, legends and untruths abound when it comes to EVs - because they're new to so many local motorists. For instance, motorists worry about issues such as range and load shedding. I drive an EV each day - and I can assure you that once you make the transition on a few of the EV nuances like thinking about litres/100km to kilowatts/100km, they're very easy to live with!"

One of the key questions on the mind of every potential EV driver is this: are you allowed to use an electric vehicle when attempting to pass South Africa's official K53 Driving Licence Test? We asked the Southern African Institute of Driving Instruction (SAIDI) for clarity on the matter and received an interesting response. So, just as taking your driving test in a vehicle equipped with an automatic transmission precludes you from legally driving one with a manual gearbox, obtaining your licence in an electric car means you cannot lawfully drive a petrol- or diesel-powered car on public roads.

READ: All charged up - Audi ready to install the first 150kW ultra-fast EV charger in SA

Chandler directed us to the relevant section of the National Road Traffic Act, which confirmed this was indeed the case. Will the rules around EVs and driving tests change?

Chandler believes the government should adjust this section of the Act, saying: "SAIDI has raised the matter with the Department of Transport, and we have requested that the relevant legislation be reviewed, and an appropriate amendment is made".

Of course, the origins of the current K53 driving rules - and indeed the K53 Learner's Test that must be passed first - can be traced back to at least the late 1970s, decades before electric cars started moving towards the mainstream.

It's worth pointing out the overwhelming majority of EVs - and indeed every option currently available in South Africa - feature a single-speed (and thus technically automatic) transmission that regulates the electric motor. So even if the legislation were to be amended, it's important to note that completing your K53 test behind the wheel of an EV would still limit you to auto-equipped vehicles. 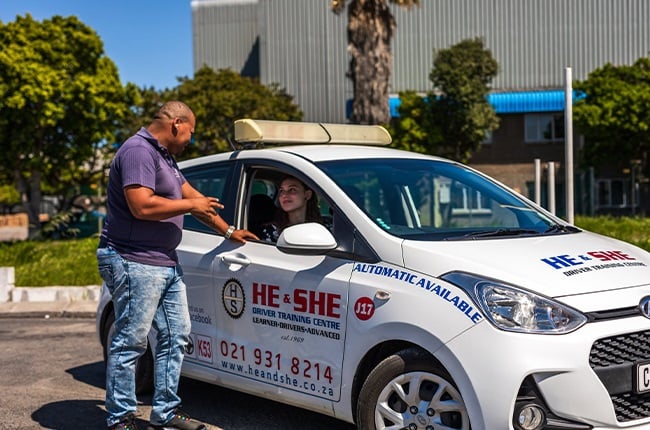 Driving school in Cape Town, South Africa
Facebook He and She Driving School

Tony Marsay, who runs the ADI Driving School in Randburg, recently purchased an all-electric BMW i3 and fitted it with dual controls. However, moments before what the 20-year veteran instructor believed would have been the first instance of an electric car being used in a driver's test in SA, the examiner confirmed a restriction would have to be put on the applicant's licence.

"I'm sure my being the first driving school in SA with an electric car will help to change the law with regards to the National Road Traffic Act. It just never occurred to me that there could be a difference between an automatic car fuelled by petrol, diesel or electricity in the 21st century," said Marsay, adding such restrictions didn't seem to be applied in many other countries.

READ: Chevrolet reveals all-electric Silverado - the bakkie SA could need, but won't get

Interest in new energy vehicles in the South African market is growing fast.

Mienie explains: "This (new energy vehicles) is propelled by a fascination with Tesla vehicles, which aren't available here yet. This doesn't deter local motorists; however - they're captivated by its CEO Elon Musk because he's a high profile businessman who was also born in this country."

Will that fascination extend to other EVs? Will we see more and more of them at the local licensing centres? Will more driving schools acquire these cars? You can bet your bottom dollar on it. As Musk famously said: "We're running the most dangerous experiment in history right now, which is to see how much carbon dioxide the atmosphere can handle before there is an environmental catastrophe."

Get the newsletter
Lockdown For
DAYS
HRS
MINS
Brought to you by
Voting Booth
Do you think Mercedes will return to form later in the 2022 F1 season after two poor races?
Please select an option Oops! Something went wrong, please try again later.
Yes, don't discredit them.
34% - 485 votes
Who cares, F1 is exciting again!
44% - 626 votes
No, it's Ferrari's turn to dominate again.
23% - 328 votes
Previous Results
Car Doctor
How much it costs to replace tyres if you buy one of SA's 5 most popular vehicles