• Modern cars are all fitted with numerous safety features.

• These features fall under one of two categories: Active and Passive.

• Seatbelts are a passive safety feature and one of the most important.

South Africa has one of the world's poorest road safety records, which means that safety features in cars are essential. But did you know that you need the optimal combination of active and passive safety features, too?

To address this, we need to explain the difference between active and passive safety features. Active safety features are designed to prevent collisions and accidents from happening in the first place. Typical active safety features include anti-lock braking systems (generally referred to as ABS), cameras and alert systems such as BLIS - the latter, which Volvo invented, stands for Blind Spot Information System. It uses cameras or radars to detect vehicles alongside and offset to the rear of the vehicle.

When a car enters the blind spot area, a warning light comes on near the door mirror, giving the driver more time to react - hopefully thereby averting an accident. 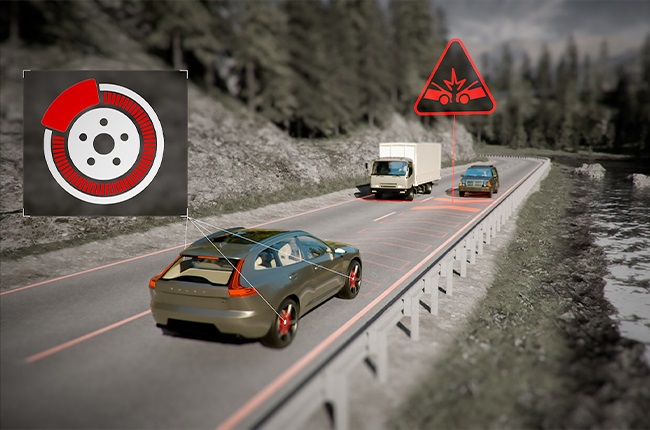 Volvo's vehicles are some of the safest on our roads, thanks to all the safety features.
Supplied

In a perfect world, accidents would never happen, and then the second category of safety features would never be required. That's because passive safety features protect the driver and passengers when an accident or collision occurs. The two most well-known passive safety features are the seatbelt and airbags. The former has been around since 1959 when Volvo engineer Nils Bohlin introduced three-point safety belts into the series production PV544. He's probably the person who has single-handedly saved the most motorists' lives.

It's estimated that over one million lives have been spared as a result of this super important passive safety feature.

WATCH: This is what a Volvo looks like being dropped from a 30m height

The two different forms of safety features - active and passive - frequently work hand-in-hand. For instance, an active safety feature such as animal detection technology (which works both day and night) will do its level best to help you avoid a kudu in the Karoo. But, if an accident still happens and you hit an animal, your car's seatbelts and airbags could well save your life.

So, the next time you're looking for a new or second-hand car, be sure to double-check those active and passive safety features! Seatbelt on a car's rear bench
Volvo Media
We live in a world where facts and fiction get blurred
In times of uncertainty you need journalism you can trust. For only R75 per month, you have access to a world of in-depth analyses, investigative journalism, top opinions and a range of features. Journalism strengthens democracy. Invest in the future today.
Subscribe to News24
Next on Wheels24
Nissan is the latest automaker planning to sell 50% electric vehicles by 2030

Subscribe to newsletters
Lockdown For
DAYS
HRS
MINS
Brought to you by
Voting Booth
Who do you feel was at fault for Verstappen and Hamilton's Italian GP crash?
Please select an option Oops! Something went wrong, please try again later.
Verstappen
25% - 1441 votes
Hamilton
43% - 2442 votes
They were both at fault
32% - 1800 votes
Previous Results
Car Doctor
If your car’s windows have been smashed, cross your fingers it’s not this one