• Fuel prices have reached a record high in March for South Africans, making electric vehicles more appealing.
• Jaguar South Africa has done its own EV vs ICE comparison of cost per kilometre when driving.
• Andrew Blane records a week's driving the I-Pace and calculates its cost.

Filling up your car's tank is a painful exercise for most South Africans as prices soared to R21 per litre early in March. Suddenly electric vehicles seem a lot more appealing, but is it really cheaper?

At almost R20/litre, our local fuel prices were already too much to deal with. Yet Russia's war on Ukraine has forced local fuel prices to skyrocket this week. Ironically, Russia's fuel prices have dropped since they're the third-largest oil exporters in the world and sitting on a whole lot of stock with nowhere to go.

This is also the year our new car market sees a vast influx of electric vehicles being added to the local car parc compared to just four options available up until last year.

Audi has launched its e-tron range with six models, while Mercedes-Benz and Volvo will add to the available options to choose from later this year. But as fuel prices are hiked, so are electricity tariffs - and who knows when we'll have the next round of loadshedding (touch wood), would electric vehicles really be a more lucrative option?

Jaguar launched its electric I-Pace in South Africa in 2019, and with a steady customer base growing, they've become experts in the EV field in their own accord.

Wheels24 recently had the I-Pace in our test garage recently, and it presented the opportunity to drive the vehicle in real-world conditions - along with some charging hiccups only because I don't have an electric vehicle charger installed at my home. And, because the only free public charging station in the area is only available during work hours on work days.

Having driven the BMW iX at the same time, the I-Pace has some standard features and options you could choose to best suit your driving style and deal with range anxiety too. You can opt to set your regenerative braking to the high mode and also turn off all other features using additional battery power to get you extra driving range. I found this most useful when driving on the highway or longer distances.

So Jaguar South Africa came up with an experiment and sent Andrew Blane, one of its senior driving instructors, on a week-long mission to record and report the electricity consumption and cost per km (R/km) of a fully-electric I-Pace in a variety of real-world driving environments. 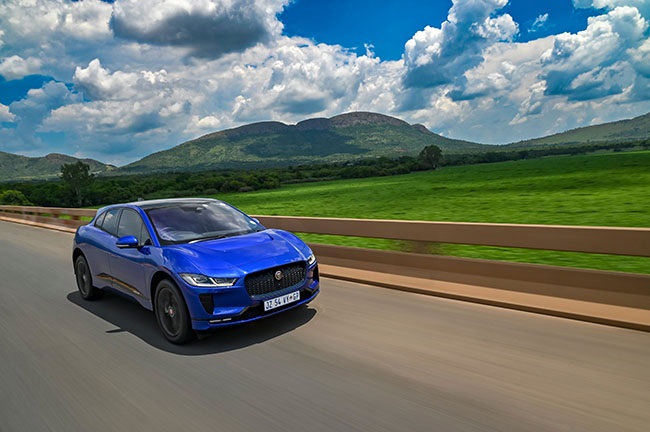 To weigh these costs against those of ICE vehicles, the brand has offered a simple formula for anyone to calculate what their current car costs in comparison.

Blane says: "We knew going into this test that ICE cars simply cannot compete with EVs on energy costs and Rands per kilometer. The objective here was to work out the costs of driving an I-Pace in the real world with results as close as possible to what actual customers would achieve. No pre-determined routes to benefit one power source over another. No laboratory test cycles. No nonsense."

While there is no denying internal combustion engine (ICE) cars still enjoy many inherent benefits, there's one contest where EVs have an indisputable advantage. They're simply cheaper to run per kilometer. Much more affordable, in fact, says the automaker.

The cost to fill a tank

Jaguar says the costs to fill EV batteries and ICE fuel tanks from empty is mainly irrelevant to the R/km comparison; it's worth knowing that electric vehicles win this fight hands down.

So, assuming Andrew was an actual I-Pace customer and recharged at home where it's the cheapest and most convenient way to fill up, a full charge from 0% battery would cost less than R200 based on his actual municipal electricity rates. ICE vehicle fuel tanks vary in size, but an SUV of similar size and performance can easily cost quadruple that, if not more.

Blane says: "Of course, the cost to fill an EV or ICE vehicle means nothing without knowing the maximum range of both. Jaguar quotes a maximum range of 470km on a full charge, and while this is certainly achievable with a light foot, I saw closer to 400km on average in the real world. True, most petrol and diesel vehicles can travel further on full tanks, but remember, it's the cost per kilometer that's more important in this test." Where ICE vehicles suffer in slow-moving, stop-start traffic, it's this environment where EVs hold an advantage. ICE cars will continue to burn fuel whether they're moving or not, where EVs will consume almost zero electricity at a standstill or creeping in bumper-to-bumper traffic.

"I deliberately spent my morning and evening commutes in as much traffic as possible. The car's trip computer registered an average of 22kWh/100km in heavy congestion, which, given my home electricity rates, equates to around 44 cents per kilometer," said Andrew.

"I had originally expected better results given the I-Pace uses virtually no energy when it's not moving, but at such low speeds, it's not able to recuperate much energy through regenerative braking. EVs actually use momentum to put some charge back into their batteries, but in slow-moving traffic, there's not enough kinetic energy to capitalise on."

Converse to ICE vehicles which are most efficient when cruising at low revs at high speed, EVs are least effective at steady speeds on the open road. Even so, the I-Pace returned favourable energy consumption and R/km figures in Andrew's test.

The energy an EV uses to cruise along at high, steady speeds varies greatly depending on average speeds. At 120km/h, the I-Pace performed the least efficiently on the highway. Prolonged periods on the throttle without regenerative braking resulted in an average electricity consumption of 24kWh per 100km. Even so, that figure equates to a cost per kilometer of only 48 cents.
Extra-urban

Electric vehicles thrive in environments with a balance of relatively high speeds and frequent braking, such as along the main arterial roads in South Africa's urban hubs or weekend jaunts to the country.

"The I-Pace performed best in what I consider average journeys for most drivers living and commuting in South African metros. Free-flowing roads with frequent robots such as William Nicol in Johannesburg or winding B-roads outside of town on the way to Hartbeespoort are ideal for EVs.

"The trip computer in the I-Pace registered averages as low as 17kWh/100km in these environments, meaning a cost of only 34c/km." Regardless of what type of car they own, any motorist will see a variety of roads and driving environments during ownership cycles, so fuel and electricity consumption averages are the all-important figures to use as bases for comparisons between ICE and EV.

"Even outside of this week-long test period, we've racked up thousands of kilometers in the I-Paces we have access to at Jaguar Land Rover Experience Johannesburg. In the real world, this car averages around 22kWh/100km, and this is a figure actual customers would likely see in the dashboard displays of their own vehicles.

"Simply put, the I-Pace costs around 44 cents to drive per kilometer if charged at home and using the national household average of around R2 per unit of electricity."

The cost per kilometer of petrol and diesel vehicles involves an ever-changing formula given the volatile price of fuel in South Africa. There are also slight differences in fuel prices depending on where you live, but coastal costs are historically a bit cheaper, so we'll use those to compare against EVs in the interest of fairness.

At the time of this experiment, the price of a litre of unleaded 95 petrol was R20.88, and a litre of 50ppm diesel was R18.96 at coastal rates. To work out your current car's cost per kilometer, simply take the average fuel consumption in your trip computer in litres per 100km (l/100km), divide the figure by 100, and multiply the result by the fuel cost per litre.

Jaguar South Africa has offered a handy guide for you to see what your car costs in fuel for every kilometer you drive: The cost per kilometre between an ICE vehicle versus an electric vehicle.
Motorpress
We live in a world where facts and fiction get blurred
In times of uncertainty you need journalism you can trust. For 14 free days, you can have access to a world of in-depth analyses, investigative journalism, top opinions and a range of features. Journalism strengthens democracy. Invest in the future today. Thereafter you will be billed R75 per month. You can cancel anytime and if you cancel within 14 days you won't be billed.
Subscribe to News24
Next on Life
The safest Volvo yet? New electric EX90 SUV will 'understand' when you're not feeling your best