It's taken Mini more than a decade to officially enter the mainstream EV space with its Cooper hatchback; however, has this ten-year wait been worth it? To find out, we spent the weekend with the latest version of the Mini Cooper SE (the all-electric version of the Mini Cooper S) to see if it has the potential to work as a family car for the city.

The car arrived on Friday afternoon, with around 60 per cent of its battery left. I immediately put it on the wall box charger that I have installed at home and set it to charge at 16A for a decent overnight charge to ensure it had a full battery for my errands on Saturday morning. The Mini Cooper SE has a relatively small battery pack, of which you can use around 33kW when the maximum charge is achieved. That 33kW of electric juice will give you around 160km of electric range in the car on a single charge, which at first I thought was not going to be enough, but then quickly realised is more than enough, but more on that later...

The Mini's onboard computer indicated that the car would be fully charged in a matter of five hours based on the amount of energy I had available at home. If I needed to use the car on Friday night in case of an emergency, I knew I would have a full charge and that I would be able to respond with zero range anxiety. I left the car to charge and decided to set off early on Saturday morning. What's it feel like to drive an electric Mini?

When I got to the Mini Cooper SE on Saturday morning, it was fully charged and ready to go. According to the onboard computer, I could do 161km in Mid mode until the battery ran flat. Decent enough as I had about 100km worth of driving to do on the day. I set my destinations in the onboard navigation system as this really helps to ensure you can stay within a safe range of travel from home to your destination. Of course, if you use apps like Waze, you can navigate to charging points situated all over Gauteng in key points.

I kept the car in Mid mode for the start of my journey, thoroughly enjoying the 135kW and 270Nm at my disposal. A Sport mode sharpens up the throttle and gives you more of a punch in the gut when you get on the accelerator pedal. However, I hardly used it as the Mid mode offers the best acceleration and cruising ability blend.

I also drove in the Green and Green+ modes for some time, and they work well, too, as you don't feel as though the car's accelerator has gone too soft. In Green+ mode, the car will cut the aircon and limit your speed to 100km/h, but that's ideal if you're trying to hyper-mile the vehicle. Its top speed is 150km/h, and it will hit 100km/h from a standstill in around 7.5 seconds. Sticking the car in Mid and letting it do its own thing with the battery management was the best way to go about my business for the morning as I popped into the Post Office and visited the local police station to have some documents certified. I also took a bit of a longer drive to the local shopping mall, joining the N1 highway to see what the car was like to drive at national highway speeds and how that affected the range.

I would be driving my wife and child to a family gathering later that day, so if I needed to charge the car's battery, I would need to know by the time I had left the shopping centre. The car felt brisk and comfortable on the highway, and it had no issues keeping up with traffic; it even managed to provide a few quick overtaking situations. This whole time, while exploring the way the car rode and delivered its power and torque, I kept my eye on that range to empty gauge, and it gave me confidence in the car's ability.

By the time I had completed my morning errands, about 40km of running around the suburbs, the range to empty told me I could still do 151km. So I only lost 10km worth of range, but I had covered around 40km of driving. This was possible because I made the most of the regenerative braking on the car. While I enjoyed the 'blast-off' acceleration here and there, I tried to drive the car to the advantage of downhills and where the traffic was calming, I would reduce speed using the regen instead of the brakes. You have to get used to these sorts of techniques when driving an EV, but you get used to it really quickly, and once you get the nag of it, even the limited range that you get in the Mini Cooper SE, it will be useable enough for a few days of driving between top-ups.

If this is going to be the second car for your family, it will rarely need topping up to total capacity all the time as it's more than capable of recovering energy as you drive. It's frugal on the battery pack if you respect the accelerator pedal. Not very family-friendly, but still capable of short trips

After I came away thoroughly impressed that my morning's errands didn't eat into the battery, I left the car off the charger as I would have more than enough juice. I grabbed the child seat from my Honda Accord and walked toward the Mini, realising immediately I was never going to get this seat into the rear of the cabin unless I dropped the rear seatback and loaded the child seat in from the boot, then slide it over. I've had to do this in several three-door compact cars to get the child seat in the rear and it kind of works, and you get used to it after a while. Inside the cabin, the space is limited in the rear, but I am not very tall. With my seat in the correct position for driving, my wife was comfortable in the rear of the car, with my four-year-old happily engaged by the panoramic roof and the quirky designs inside the vehicle.

The car's boot is also reasonably cramped, so you can't get more than a large suitcase in there, but for grocery hauls and kids school bags and some sports gear, it will work perfectly fine. I loaded the boot with four cases of water, and it fitted, and there was no fuss from the car in terms of having that added weight in the trunk.

Apart from the challenge of the three doors, with me having to get in and out all the time to allow for the rear passenger to exit, the car proved to be an uplifting place for us to talk and listen to music and relax. There's just something different about electric vehicles, where they don't vibrate your innards thanks to not having an internal combustion engine that provides one of the most luxurious feelings you can have in a car. This Cooper SE, in fact, has a good feeling of luxury and quality, and yes, you don't get full leather or anything like that anymore in these premium cars; you do get a fresh and exciting interior with multicolour fabric seats made from recycled materials. The tech in the car is also on point, and it's easy to pair your smartphone with it to make calls or to use apps over CarPlay. I didn't get a chance to see if Android Auto works, but the CarPlay on the iPhone 11 worked a peach with seamless access to music, navigation, and audiobooks for my child to listen to while we drove. We spent about an hour in the car that evening driving to and from our destination, and I covered about 80km of distance. According to the car, I could still do another 60km before it needed a full charge. I knew I'd simply pop it on the charger, and I'd have a full charge in a few hours, so I had no range anxiety whatsoever for the next day.

Look, I'll admit that the Mini Cooper SE is not cheap, but that's a fact we're going to have to get used to if government incentives around EVs don't improve in South Africa. At the moment, EVs are taxed as luxury cars, so this compact Mini should be way cheaper if the government got involved and gave buyers some form of cashback or incentive for going the EV route like they do in the UK and most parts of Europe and the USA.

For what it's worth, the Mini Cooper SE is a great way for young executives or small families to start to move into an all-electric mobility solution to get used to the future of premium cars, most of which will be hybrid or all-electric. I see it this way, where you can jump into a Mini Cooper SE now, and then as your needs change, you can visit BMW for an i4 electric sports car, or you could go for something like an iX3 or iX if you need more space in your life. Sure, you can't jump into the Mini Cooper SE and drive to Durban in seven hours from Johannesburg like you could with a normal turbo-petrol Cooper S, but this car is built for the city, and it works very well if you keep it just there.

Of course, you will receive a five-year or 100 000km full maintenance plan with the Cooper SE, but you don't have a lot to service when it comes to electric cars. And because the Mini Cooper SE is quite aggressive with its regeneration settings, you are rarely hard on the brakes in the car, so you could be changing brake pads and discs much less than you're used to in these sorts of vehicles. Of course, tyres can take a pounding as you're unleashing lots of torque all at once sometimes, and EV tyres lean toward the softer side for this. 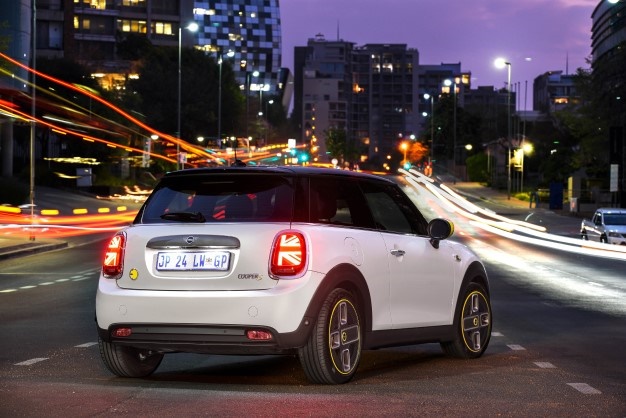 Overall, the Mini Cooper SE proves to be a fantastic electric car. It will work perfectly as your first EV as you get used to driving electric vehicles, and you get into the habits of charging your car and how to get the best out of it. You know, we've been conditioned for so many years that nice exhaust notes and purring engines are what you want. Still, when you experience good cars like these Mini EVs, you start to see that there's so much more to this electric vehicle transition than meets the eye and that cars are going to get even more exciting as more EVs arrive in SA.

I'd say give the Mini Cooper SE all-electric car a shot if you want to experience something different but still familiar. It has this wonderful sense of charm to it, and it drives so smoothly and with such vigour that you'll have this permanent grin on your face. Prices start at R686 400 before options.

We live in a world where facts and fiction get blurred
In times of uncertainty you need journalism you can trust. For 14 free days, you can have access to a world of in-depth analyses, investigative journalism, top opinions and a range of features. Journalism strengthens democracy. Invest in the future today. Thereafter you will be billed R75 per month. You can cancel anytime and if you cancel within 14 days you won't be billed.
Subscribe to News24
Next on Life
OPINION | Australia has a new Electric Vehicle Discount Bill - why South Africa should follow suit