The car for us? New Corolla Cross Hybrid more than just an 'alternative' vehicle • Hybrid vehicles could be the immediate answer South Africans need as we adopt 'green' mobility solutions.

• Like an electric vehicle, hybrids are efficient in peak traffic situations.

• Toyota's Corolla Cross Hybrid is the most affordable of its sort in South Africa.

Of late, the Wheels24 newsfeed has been abuzz with news and stories on electric vehicles (EVs). It's not surprising, though, given that 2022 is the year in which South Africa will see a greater influx of EVs coming our way. Companies like Audi, BMW, and Mercedes-Benz (their EV division is called Mercedes-EQ) will all launch an EV of some sort, and it's bound to happen from other automakers, too.

However, while EVs are all the rage now, some readers have made their displeasure in this form of automobility known. They are representative of the general concerns held by South Africans and 'our' uptake of e-mobility. And justifiably so, because EVs are expensive, range anxiety is real, and charging times are just too time-consuming.

While they are not against EVs, Toyota realises that the uptake of this form of mobility, especially in South Africa, could take a tad longer than in other parts of the world. Therefore, the automaker's local arm made plans to acquire the production rights of the all-new Corolla Cross Hybrid, now built at its Prospecton plant in Durban, Kwazulu-Natal. For Toyota South Africa Motors (TSAM), it was an important move as it then positioned the automaker as the bridge between ICE (internal combustion engines) and EVS. EVs are the future, but not yet in SA

When it comes to the uptake of electric vehicles, South Africans are still exhibiting strong resistance. Those who can afford them often purchase it as an additional vehicle, usually a second or third vehicle. Whatever their reason for doing so, the general uptake of EVs in South Africa is slow and can't we compare our market to that of our first-world counterparts. Abroad, several policies and aids are in place to ease the transition, whereas, in South Africa, we do not have it.

Our government said that they would soon be implementing a 'rewards system' for automakers bringing green vehicles to market, but the general trust among stakeholders is low.

Betting on this 'green incentive', if you will, TSAM began Corolla Cross Hybrid production. And the rest, as they say, is history. The Corolla Cross Hybrid merges ICE with battery power, allowing the vehicle to run on both power sources. The result is a more fuel-efficient vehicle than its ICE counterpart with a greater driving range. But is it more efficient, though?

The big talking point around the new Toyota Corolla Hybrid is that it is more fuel-efficient than its traditional ICE counterpart. And to an extent, it is. The Cross Hybrid comes into its own in peak traffic where the engine does not need to overexert itself. The battery will propel the crossover forward by running at (very) low speeds with light throttle inputs. Being in EV mode, no fuel is used, helping the Corolla Cross Hybrid achieve its claimed economy of 4.3-litres/100km.

We found this impressive and can confirm that it increases efficiency. However, fuel economy takes a turn for the worst when traversing at higher speeds.

It increases by a substantial margin as the ICE overrides the battery. Open road conditions, where you can drive at speeds of up to 120km/h, is not conducive to the Cross Hybrid's strengths. After various runs, it was interesting to note the vast economic differences between city- and open-road driving. Our highest recorded fuel figure was more than 8.0-litres/100km. Wheels24's Janine Van der Post says: "While I agree about the fuel consumption with my colleague Charlen Raymond, I also have to say that fuel readings at the lower end of the spectrum is very much achievable. While Charlen might have done a lot more highway driving, I used the Corolla Cross to do more conservative driving like little runs to the shop or short distance trips up to 20km in city driving.

"Naturally, because I was probably only driving between 60km/h and 80km/h, achieving a fuel consumption of about 4.9-litres/100km. However, taking a longer trip also saw fuel readings reach 7.9-litres/100km at one point. Still, it made me wonder if getting a smaller compact city car would not be more suffice if you're looking to save on fuel.

Despite that, the Corolla nameplate is one that carries trust with loyal customers, and the Cross offers a great package in terms of build, reliability, space and comfort - and lower fuel readings. It's no wonder it will continue to sell well for Toyota. 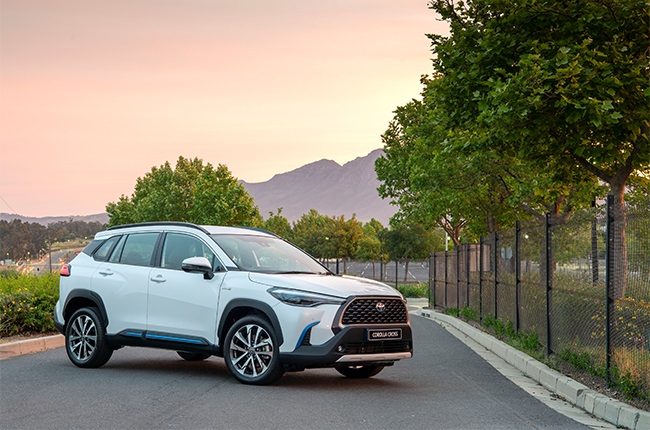 Is the Cross Hybrid a no-go?

In short, no. It remains an impressive vehicle - even in entry-level Xs guise.

As most South Africans continue the struggle of wrapping their heads around electric mobility, the Toyota Corolla Cross Hybrid suits the market like a glove. Car buyers know that the country is not ideally positioned for the full influx of EVs, but a hybrid, at the right price, can do wonders to ease the transition. This is what the Cross Hybrid is doing, and the strong sales figures suggest that this approach by Toyota is the right one.

Consumers interested in the Toyota Corolla Cross Hybrid - or any other hybrid vehicle sold in SA - should know that, like an EV, the economy is impacted negatively when you're not in stop-go traffic. But with regards to the adoption and acceptance of future mobility in South Africa, this is the vehicle that hits it right on the money. 2022 Toyota Corolla Cross
Motorpress
We live in a world where facts and fiction get blurred
In times of uncertainty you need journalism you can trust. For 14 free days, you can have access to a world of in-depth analyses, investigative journalism, top opinions and a range of features. Journalism strengthens democracy. Invest in the future today. Thereafter you will be billed R75 per month. You can cancel anytime and if you cancel within 14 days you won't be billed.
Subscribe to News24
Next on Wheels24
EXPLAINER | How do you charge an electric car in South Africa?