While we were out and about assessing the recently refreshed Volvo Cars line-up of hybrids and the new all-electric XC40 P8 Recharge, we also snuck a test drive in the new XC40 P6 Recharge.

The XC40 P6 Recharge will be Volvo's second all-electric variant for South Africa, ahead of the launch of the C40 Recharge later this year. The P6 model is front-wheel-drive and comes with a single electric motor compared to the P8 Recharge, which is all-wheel-drive and powered by two electric motors (one per axle). Volvo XC40 P6 Recharge is now on sale in SA - but what's the price?
Supplied

While nothing's official, the P6 Recharge will be priced competitively in the EV segment. The P8 sells for around R1.2 million, and while Volvo Cars South Africa won't admit it, it aims to bring the P6 in for approximately R1 million. That's not cheap, don't get us wrong, but it is an exciting proposition in the premium SUV segment where entry-level diesel SUVs already cost more than a million bucks.

If they nail the pricing and bring it in for a bar, it will undoubtedly accelerate interest in all-electric mobility among the wealthy. After all, it's still an XC40, and it's perfectly capable of working as a respectably sized family car, and the P6 Recharge offers a decent driving range. 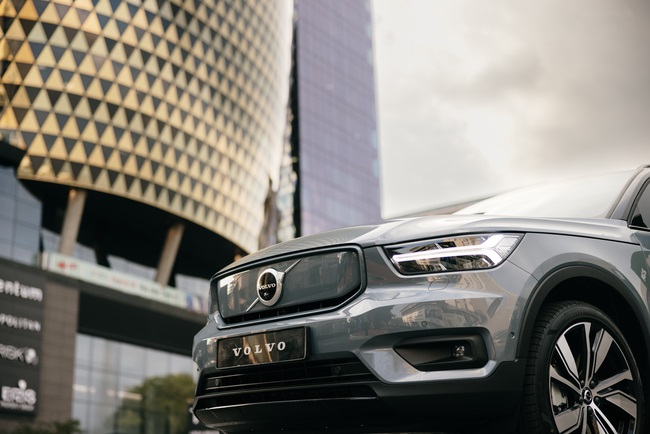 Volvo XC40 P6 Recharge is now on sale in SA - but what's the price?
Supplied

While the XC40 P8 Recharge boasts twin electric motors, the P6 Recharge features a single unit that's permanently sealed and maintenance-free – mounted at the front of the vehicle. With peak outputs of 170kW and 330Nm, the new front-wheel-drive all-electric XC40 variant sprints from zero to 100km/h sprint in 7.4 seconds. Quick enough to satisfy drivers who are used to a bit of oomph.

Thanks to a compact, low-mounted, high-voltage (400V) 69kWh lithium-ion battery pack, the claim that the P6 Recharge can travel up to 423km on a single charge in a combined cycle. The vehicle is fitted with an 11kW onboard charger as standard. Although we only spent 30 minutes behind the wheel, battery depletion was minimal. It recuperated energy as it slowed down, and it was topped up on-site using the AC charger, and none of the testers had a challenge with range. We'll put it through a full range test when it arrives in the Wheels24 test garage. Capable as a family car

The stand-out experience, other than the brisk acceleration that EVs offer, is that driving the XC40 P6 Recharge feels as normal as driving a petrol-powered XC40. You sit in a comfortable driving position, the car's controls are relatively traditional, and the Android Automotive multimedia system makes it such a delightful place.

The vehicle uses a shift-by-wire, single-speed transmission featuring a short gear ratio, resulting in the aforementioned sprightly off-the-line acceleration. More importantly, if you plan to use it as a family car or adventure vehicle, it can tow up 1 500kg (braked).

In terms of features, expect six airbags, a plethora of driving aids, ISOFIX child seat anchors, a decent boot that can carry up to 414 litres of cargo, and connected car technology through Google. You might have to invest in a small mobile LTE router for the car as it's best enjoyed as a connected car with Google Assistant and all the associated apps you use daily.

We enjoyed using voice control to navigate, ask about the battery life, and stream media from various sources, including YouTube. You can't watch YouTube videos on the main screen while the vehicle is moving, but Volvo Cars say the ability to watch your favourite vloggers while charging will keep you occupied. We expect Netflix and Amazon Prime streaming to be embedded as a feature in the future, thanks to over-the-air software updates.

Is it worth considering?

If you travel less than 50km a day and can afford around R1 million on a second car for your family, you must consider this XC40 P6 Recharge as an option. Even if it's your only car, you can easily live with it and travel without range anxiety as long as you keep it topped up at home or wherever you might be with it overnight using the onboard charger. EV battery and motor technology have come a long way in very little time, and Volvo Cars South Africa is confident that making the switch to EV won't be as jarring as you might think. Although our experience with the car was brief, it was confidence-inspiring.

You get a decent range to "empty", more standard features than expected, a solid build with premium and recycled materials, and it feels great to drive. If you switch to this car, you'll never have to revisit a garage other than checking the tyre pressures or filling a few liquid bottles. As the cost of internal combustion premium vehicles rises and the cost of EVs like this P6 Recharge fall, it's only a matter of time before more people who can afford them choose to be moved by electrons instead of gasoline.

Volvo Cars say it will release the official price of the XC40 P6 Recharge soon, but you can already express your interest in one through the MyVolvo website. You can get in early on the EV rush here with a keenly priced car, but that's if they get the price right. Come on, Volvo Cars, tell us what it will cost already.

The Volvo XC40 P6 Recharge comes with a five-year or 100 000km mechanical warranty and an eight-year or 160 000km warranty for the battery pack. You can also park it at a Volvo dealer and use a petrol-powered XC40 for long-haul road trips for the first few years of ownership.

Get the newsletter
Lockdown For
DAYS
HRS
MINS
Brought to you by
Voting Booth
Petrol prices are almost at R30 per litre. What are you doing to help deal with monthly fuel bills?
Please select an option Oops! Something went wrong, please try again later.
I've downgraded my vehicle.
6% - 4 votes
I've joined a lift club.
4% - 3 votes
Nothing I can do. I am struggling with costs.
76% - 54 votes
Working from home is a saving grace.
14% - 10 votes
Previous Results
Car Doctor
Car doctor | How 'pimping your ride' could affect your vehicle insurance - what...