Ford Fiesta demonstrates why ESC is so important 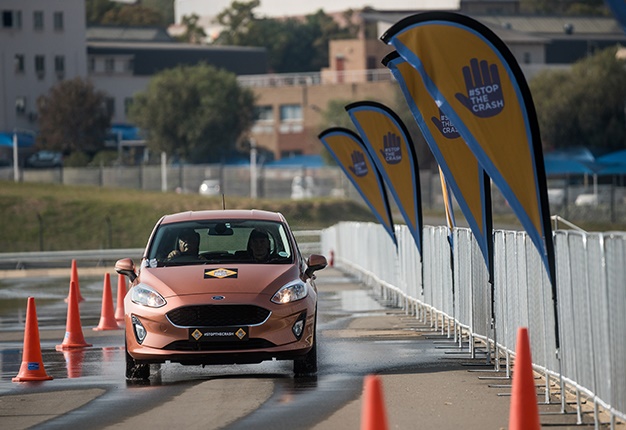 The Ford Fiesta took centre stage at the Stop The Crash South Africa (www.stopthecrash.org) show recently hosted by Global New Car Assessment Programme (NCAP), in partnership with the Automobile Association of South Africa (AA) as part of its advocacy campaign to governments to make life-saving crash avoidance technologies a regulatory requirement for new vehicles and to advocate for the widest availability of these technologies worldwide.

One such technology is the Electronic Stability Control (ESC), which is reported to have prevented approximately 260 000 vehicle accidents in Europe between 1995 and 2015 according to Bosch, a global supplier of technology and services.

ESC is a computerised programme that uses various sensors to detect and actively reduce loss of traction and uncontrolled skidding in a moving vehicle – it is thus referred to as an active safety feature along with the likes of anti-lock brakes (ABS) that help reduce the risk of a loss of vehicle control.

The multitude of motorists who made their way to Kyalami Race Track to witness the first-ever Stop The Crash show in South Africa were treated to an exciting display of ESC in action. To demonstrate the effectiveness of ESC in an emergency avoidance manoeuvre, two Ford Fiestas were thrust around in a handling exercise to show how a vehicle responds when ESC is active in a car compared to when it is not fitted, or in this case when it is deactivated.

The ESC system constantly monitors the driver’s steering and the movement of the car, and interacts with the accelerator and brakes. When it detects that the car is moving in a different direction than the one indicated by the driver through the steering control, the ESC system automatically and instantly applies the brakes on individual wheels to help steer the car in the desired direction, and reduces engine power delivered to the drive wheels.

This assists in minimising the loss of control and helps reduce understeer where the front wheels run wide, as well as oversteer which occurs when the rear wheels lose traction, thus causing the back of the vehicle to slide out. “The demonstration by Global NCAP of the benefit of having ESC in a car was an eye-opener for everyone who attended the Stop The Crash show,” said Doreen Mashinini, General Manager Marketing at Ford Motor Company of Southern Africa. “In a country like South Africa that has among the worst safety records in the world in terms of vehicle collisions, accident-related injuries and fatalities, it is vital that everyone, including motorists and government officials, take notice of campaigns like Stop The Crash that aim to reduce road accidents. We are glad that we were able to play a part in this campaign from a vehicle support perspective.” The ESC system also provides an additional range of active driving aids on various Ford models such as traction control for smooth pull-offs on slippery surfaces, Hill Launch Assist (HLA) that applies the brakes briefly for ease of pulling off on inclines, and the innovative Hill Descent Control (HDC) on 4x4 Ranger and Everest models that ensures the vehicle remains stable when traversing steep off-road gradients.

Additionally, the ABS system that is standard on all new Fords incorporates Emergency Brake Assist (EBA) that applies maximum braking force if it detects an emergency situation, along with Electronic Brakeforce Distribution (EBD) that automatically directs the braking force to the wheels with the most traction. Passive safety features, such as seatbelts with pretensioners, airbags, side-impact beams, ISOFIX child seat anchorage points and the reinforced safety cell structure of the vehicle play a crucial role too, and are designed to protect the driver and passengers in the event of a collision.

The Fiesta is rated as one of the safest cars in the “Supermini” segment, having achieved a maximum five-star rating in the European New Car Assessment Programme in 2017. It achieved an 87-percent score for adult occupant protection and 84 percent for child occupants. Ford DSFL has trained more than one million drivers in 40 countries to date, which equates to an investment of more than $50 million (over R720-million). In the Middle East and Africa region alone last year, over 1 600 motorists benefitted from the training that focuses on the four primary driving skills: hazard recognition, vehicle handling, speed management and space management.

We live in a world where facts and fiction get blurred
In times of uncertainty you need journalism you can trust. For only R75 per month, you have access to a world of in-depth analyses, investigative journalism, top opinions and a range of features. Journalism strengthens democracy. Invest in the future today.
Subscribe to News24
Related Links
WATCH: Avanza, Amaze, Ignis - 3 of SA's most popular cars crash-tested
Next on Wheels24
Downsizing? Here are some incredible cars you could buy right now and feel great about