• Gridlock traffic is causing motorists to opt for automatic transmissions.
• This trend is forcing automakers to follow suit.
• We list the five cheapest auto models in SA.
• For more motoring stories, go to Wheels24.

As much as the old-school petrolheads among us adore the manual gearbox, there's no denying the presence of a third pedal is a largely unwelcome one when stuck in soul-destroying traffic. While manually swapping cogs as you scythe through a deserted mountain pass makes for an appropriately visceral experience (in the right car, anyway), it becomes something of a chore when dealing with the daily gridlock.

It's for this reason motorists are increasingly turning their backs on the humble manual transmission, in turn compelling automakers the world over to tailor their line-ups to suit. That means the slowly disappearing stick shift is these days largely limited to doing duty in performance vehicles (though even there, they're fading) and the most basic of budget cars.

That's not to say South Africa's new vehicle market doesn't include a handful of wallet-friendly two-pedal cars. We've combed through the data and picked out the five cheapest vehicles – each bearing a sub-R200 000 sticker price – that come equipped with an automatic transmission. Let's dive right in... Launched locally late in 2020, Toyota's budget-beating Agya – which is interestingly based on the Daihatsu Ayla – can be specified with a four-speed automatic torque-converter transmission for a R13 900 premium over the five-speed manual derivative. It's not the most modern self-shifter, but it'll certainly do the job in bumper-to-bumper traffic.

As a reminder, the Agya's naturally aspirated 1.0-litre, three-cylinder petrol mill delivers 49kW and 89Nm to the front axle. Specified with the aforementioned auto transmission, the little hatch isn't the sprightliest thing around, taking a leisurely 16.3 seconds to accelerate from standstill to 100 km/h, before topping out at 145km/h. Still, at least it's thrifty with fuel, sipping at a claimed 4.9-litre per 100km. Have you ever heard of the BAIC D20? If not, we don't blame you. We've not seen many of these Chinese hatchbacks out on the road (make of that what you will). Still, despite the four-speed automatic torque-converter transmission being offered in range-topping "Fashion" trim only, it's inexpensive enough to make the cut.

The atmospheric 1.5-litre, four-cylinder petrol engine generates 85kW and 148Nm, which is enough to make it the most powerful model here (though the local distributor chooses not to disclose claimed 0-100km/h or top speed figures). However, it's also the thirstiest of the bunch consuming a claimed 7.6 litres per 100km. Next up is the self-shifting version of Suzuki's Celerio, which is priced from R185 900. However, unlike the two models above, this little tyke employs a five-speed automated manual transmission (AMT … or "Auto Gear Shift" in Suzuki speak). That means the budget hatchback features an electric-hydraulic actuator that automatically performs clutch and shift operations on behalf of the driver. Suzuki claims such a configuration combines the best of automatic and manual gearboxes.

However, in practice, the AMT is a little less user-friendly, sometimes lurching between gearshifts and often making the 1.0-litre three-pot's peak outputs of 50kW and 90Nm seem even more modest than they are (the obligatory sprint to three figures takes some 14 seconds). That said, treat the throttle with finesse – as one typically does in traffic – and the transmission behaves well enough, making full use of the built-in "crawl" function. It's also even more efficient with fuel than the manual model, with Suzuki listing a figure of 4.6 litres per 100 km. 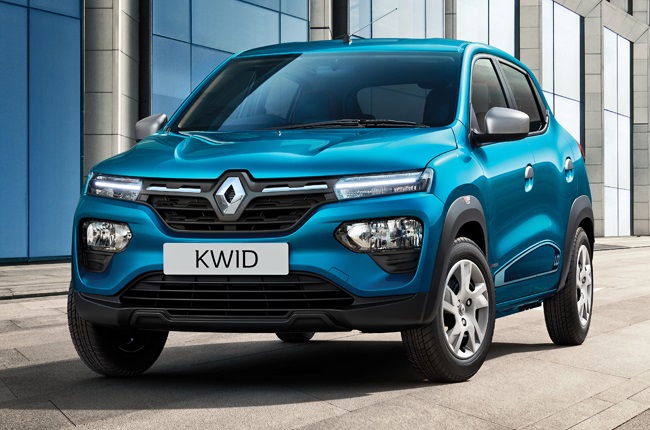 The market's second-cheapest car fitted with an automatic gearbox is Renault's popular Kwid. Like the Celerio above, the French firm's budget car can be specified with a five-speed AMT rather than a traditional torque-converter auto or continuously variable transmission. Again, it's not the slickest cog-swapper out there, but it's up to the job of dealing with heavy traffic.

As a reminder, the Kwid's free-breathing 1.0-litre, three-cylinder powerplant generates 50 kW and 91 Nm, though Renault SA opts not to list a 0-100 km/h time. Claimed consumption, however, is an attractive 4.4 litres per 100 km. For the record, the AMT is also available in conjunction with the mid-spec Dynamique (R182 900) and flagship Climber (R193 900) trim levels. Touching down in South Africa in March 2020 – yes, mere days ahead of the start of lockdown – Suzuki's quirky little S-Presso is still the cheapest car on the local market. Thus, it should come as no surprise that at R168 900, the five-speed AMT version is also the country's least-expensive two-pedal vehicle.

The S-Presso shares its powertrain with the Celerio above, which means peak power of 50 kW and maximum twisting force of 90 Nm. While sprint times and top speed are not listed, Suzuki claims the Indian-built model – which tips the scales at a mere 750 kg – will sip unleaded fuel at just 4.9 litres per 100 km. Not bad for the cheapest auto in the land.

We live in a world where facts and fiction get blurred
In times of uncertainty you need journalism you can trust. For only R75 per month, you have access to a world of in-depth analyses, investigative journalism, top opinions and a range of features. Journalism strengthens democracy. Invest in the future today.
Subscribe to News24
Next on Wheels24
Non-OEM workshops can now service your car, but customers must respect the rules