Here's just how safe the new Honda Amaze is in SA The new Honda Amaze might not be a striking hot model, but it's snubby, comforting face is becoming more popular, and it's certainly getting more love as time goes on. Launched in October 2018, the little car has redefined itself as a new standard of compact sedans.

This year started off with a bang in January which saw the Amaze move 115 units off showroom floors. From February through to May, figures were between 42 and 56 for that period. In June, numbers spiked to 102, 93 (July) and 71 in August.

Just how safe is Honda's popular Amaze in South Africa? Global NCAP and the Automobile Association of South Africa has launched the third round of #SaferCarsForAfrica crash test results with the welcome support of the FIA Foundation and Bloomberg Philanthropies earlier this year.

The Amaze's platform makes use of high-tensile steel, which translates to a lightweight but rigid construction.

Honda also claims its features the automaker's Advanced Compatibility structure, "which allows for specific, programmed deformation of body structures in the case of a collision, while ensuring the integrity of the passenger safety cell."

The models tested by Global NCAP are the Toyota Avanza, Honda Amaze and Suzuki Ignis.

What do you think of the Honda Amaze? Do you own one? Tell us all about it, just email us 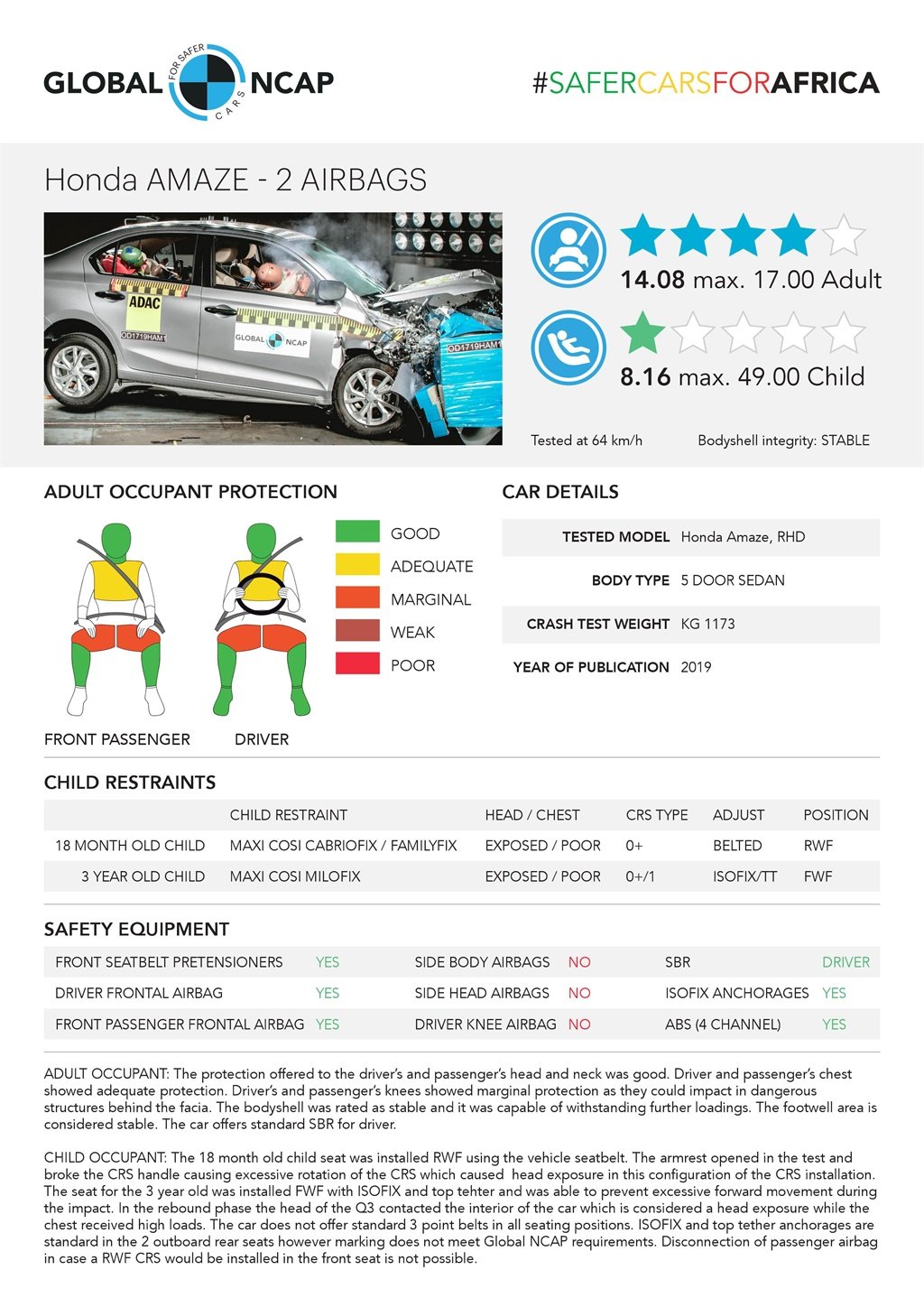 The Honda Amaze achieved a solid four stars for Adult Occupant Protection in the frontal crash test at 64km/h. The vehicle structure was rated as stable as well as the footwell area. The car offers seatbelt pretensioners for both front passengers and seatbelt reminder for the driver.

Using the child seats recommended by Honda, the Amaze only achieved a one star rating for Child Occupant Protection. The child dummies contacted the interior of the car, showing evidence of head exposure and the probability of injury.

In the case of the 18-month-old CRS, the armrest opened (deployed) during the crash hitting the CRS, braking the handle lock and causing a rotation of the CRS that ended in the head of the dummy contacting the seat backrest.

In the case of the 3-year-old dummy, despite using a CRS with ISOFIX, its head contacted the interior of the car in the rebound phase. Both head contacts of both child dummies brought the head score to zero and with the broken CRS for the 18 month old dummy the full points of the dynamic test for this dummy were lowered to zero.

We live in a world where facts and fiction get blurred
In times of uncertainty you need journalism you can trust. For only R75 per month, you have access to a world of in-depth analyses, investigative journalism, top opinions and a range of features. Journalism strengthens democracy. Invest in the future today.
Subscribe to News24
Related Links
WATCH: The Honda Amaze at a glance
Fuel-efficiency meets affordability in Honda’s Amaze
Next on Wheels24
R20 per litre: November fuel price hikes giving you a headache? Here's what to do about it

Subscribe to newsletters
Lockdown For
DAYS
HRS
MINS
Brought to you by
Voting Booth
Who do you feel was at fault for Verstappen and Hamilton's Italian GP crash?
Please select an option Oops! Something went wrong, please try again later.
Verstappen
25% - 1212 votes
Hamilton
42% - 2016 votes
They were both at fault
33% - 1581 votes
Previous Results
Car Doctor
WATCH | How to protect yourself from buying a water-damaged used car