How Volkswagen crossed over from Polo to T-Cross We trace the history of VW’s South African market crossovers, a range which started more than a decade ago.

VW will be using the month of March to launch its first compact crossover to the world’s automotive media in Majorca, Spain.

Anticipation for the T-Cross will be massive this year, especially in crossover obsessed South Africa, as it has been confirmed for local distribution.

You might suppose that front-wheel drive crossovers are a new thing for VW, but the German brand has been dabbling in the art of the pseudo-SUV for years. We remember some of VW first crossover to be marketing in South Africa.

The original Cross Polo was as an answer to a question that nobody asked when it was first introduced in 2007. VW Polo customers were young professionals, not gravel travellers, and despite the excellent fourth-generation Polo platform, product planners made a huge error in judgement with this Cross Polo in terms of final specification.

They crucially omitted a full-sized spare wheel. That meant that you had a Polo, with pseudo-crossover styling and the yearning to go gravel travel exploring through the Karoo, but no means to keep moving on a gravel road if you got a flat tyre. Which you inevitably did, because it rolled low-profile tyres on 17-inch wheels, which are wholly inappropriate for South African secondary and dirt roads. And then you only had a tiny spare saver spare to keep you crawling along. More of the same, but with some slightly more astute product planning. What saved this Cross Polo from irrelevance was the fact that it was locally built, at VW’s facility in Uitenhage. That meant its final specification could be influenced by VW’s local staff and as such, it featured a full-sized spare wheel.

The tyres still weren’t quite voluminous or appropriate for long-distance gravel road journeying, but at least you had the security of knowing that if one went flat, you’d change that wheel for an appropriately sized replacement.

Engine options were two 1.6-litre four-cylinder powerplants, both making 77kW, but with a substantial difference in peak torque between the naturally-aspirated petrol and turbodiesel versions, with 155Nm on offer in the former and 250Nm in the latter. Roof rails, some cladding and a 15mm ride height increase gave Cross Polo the required pseudo-SUV stance and sufficient differentiation from its range siblings. Essentially the Cross Polo 2.0 reborn, thanks to VW’s legacy manufacturing strategy with Vivo. Although launched in 2018 it will be a starkly familiar vehicle to any second-generation Cross Polo owner: same 15mm suspension lift, same 215/40 profile tyres, same plastic body cladding.

What VW South Africa did manage to do, in order to differentiate this Vivo Maxx from its Cross Polo predecessor, are five-blade alloy rims with radically split spokes. The Vivo Maxx’s silver plastic pseudo-sump guard is useless but the black plastic body cladding and wheel arch surrounds do serve a sensible purpose, saving paintwork from ruinous stone chips whilst you are journeying on gravel roads. A crossover MPV, what is the world coming to? Look beyond the marketing doublespeak and this remains a cleverer mode of family transport than most SUVs.

The VW Caddy Alltrack is built on a Golf platform, which means it can go around corners and cruise at high-speeds with some ability. It’s also not uncomfortably large, which makes it easy to park. Very clever engineering means that this Caddy’s high-volume cabin optimises cabin space.

Crossover specific bits? They are cosmetic, mostly. You can order the Alltrack in two eye-popping hues (Sandstrom yellow and Viper green), contrasted by 17-inch alloy rims – which are the largest wheels fitted to any derivative in the Caddy range. Silver roof rails, wing mirrors and rocker panels also help to distinguish the Alltrack from lesser Caddies.

Engines? Two flavours of 2.0-litre VW turbodiesel: 81- and 103kW. Best to go for the more powerful engine, as that gives you the option to pair it with VW’s excellent DSG gearbox. The 81kW Caddy Alltrack can only be had with a five-speed manual, and with a late-bite clutch and low-speed turbolag, it can be rather prone to stalling. 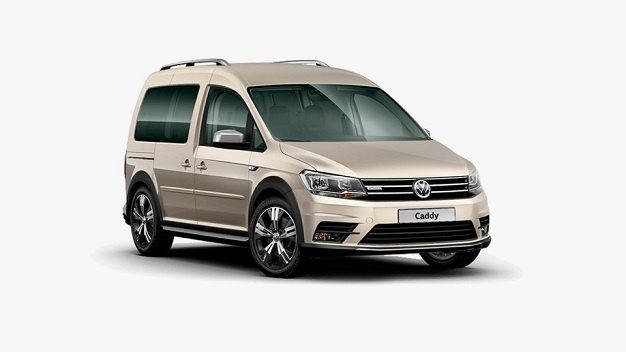 We live in a world where facts and fiction get blurred
In times of uncertainty you need journalism you can trust. For only R75 per month, you have access to a world of in-depth analyses, investigative journalism, top opinions and a range of features. Journalism strengthens democracy. Invest in the future today.
Subscribe to News24
Related Links
WATCH: VW's new baby T-Cross SUV uncovered and on its way to SA
Next on Wheels24
Car Doctor DIY | These stress-free tyre changing tips will turn anyone into a pro