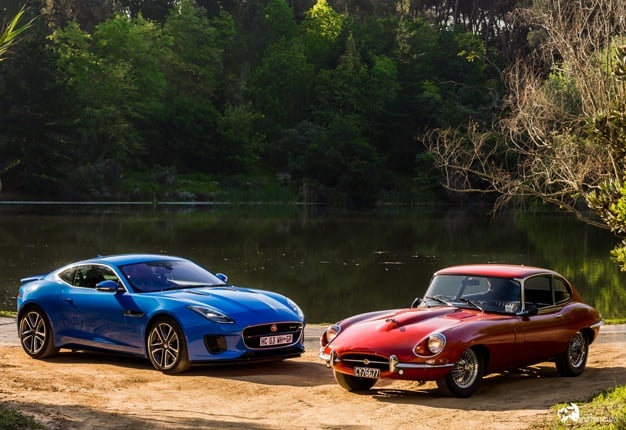 Two very different cars, same parent company, same DNA, same heritage. That, in a nutshell, is how to best describe one of the greatest reunions in the automotive world - Jaguar's classic E-Type, met one of its offspring, the F-Type.

The F-Type is a very modern sports car with all the bells and whistles you’d come to expect from Jaguar though the E-Type was just as groundbreaking in its day.

When first revealed at the Geneva Motor Show in the early 1960s, interest in the car was so great that Jaguar had to drive a second model from England to the show overnight!

WATCH: The incredible journey of this classic Jaguar E-Type will warm the heart of any car enthusiast

Overtime, the E-Type has gained cult status and racked-up numerous accolades. Decades on and it’s regarded as a living legend among car enthusiasts.

The fortunate few that own one are reluctant to part with their highly-prized classic. The rarity of these cars on our roads make for spectacular viewing pleasure when one crosses your path.

The new Jaguar F-Type has been launched about five years ago and has since been labelled as the spiritual successor to the E-Type.

Though there are decades between these two cars and the generations and eras they represent, the possibility of past and present coming together has got to be one of life’s greatest anticipations. And it just so happened that the F-Type steered its nose in the right direction; a direction that proved that destiny was no fluke. It was early sunset when I pulled up at a traffic light and saw a classic Jaguar parked at a garage. I immediately recognised it as the E-Type and saw that the owner was paying for his fuel and about to leave.

I pulled off a sho't-left and proceeded to wave the owner down; to which he kindly obliged. After a quick chat through our respective windows, contact details were exchanged and a meeting was setup. I never knew my smile could stretch that far around my head!

It was an epic encounter that only came to fruition due to the F-Type. This was not a question of “May I take pictures of your car, please?”, but a mutual sense of reuniting long-lost family members. 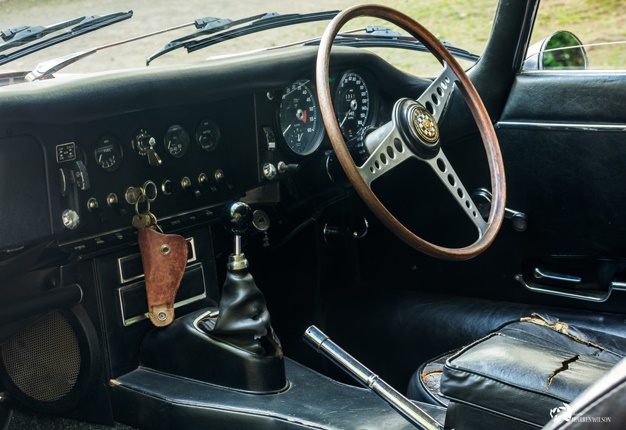 The F-Type is one of the best-looking sports cars and despite the design being a few years old, it still captivates onlookers.

In its infant stage - compared to the E-Type’s decades of motoring presence - the F-Type has some way in acquiring the reputation of its progenitor but it has already has achieved quite a following.

It was back in the 1950s when Jaguar ran rampant in motorsport and to celebrate the success on the racetrack it built the E-Type. The first models appeared in the early parts of the following decade and soon a good number of E-Type’s rolled off production lines. Lots of them.

As the years went by the E-Type became more popular and Jaguar decided to expand the range, this meant the introduction of the Series 1.5 Fixed Head Coupe 2+2 (four-seater) in 1966. However, the FHC sported a new 4.2-litre six-cylinder engine that was mated with either a four-speed synchro-mesh manual transmission or three-speed automatic gearbox.

The one we were confronted with is a non-US spec model and the engine produced (when new) about 200kW. This specific model is one of the rarest E-Type’s around, as it is the only Series 1.5 FHC 2+2 in South Africa! Damn it, can it get any more special than this, can it?!

This Cape Town owner said the car was a gift. When his parents found out they were having a boy, his father was so overjoyed he purchased the Jaguar. That was little over 45-years ago. The car has been in the family ever since and has been the primary mode of transport during his childhood years on a number of occasions.

Family holiday to Botswana, rope in the E-Type. Visit family in Johannesburg, use in the E-Type. Both his mom and dad have driven the car and he took possession of it when he became of age.

And his relationship with the E-Type is especially, er, special; It receives the greatest care possible and his family also know not to ‘touch’ it.

The owner speaks with adoration and mentions how, as an eight-year-old, he first came to hear of his father’s car-purchasing spree. During his teenage years his parents avoided the topic when he reached adulthood, he took delivery of his E-Type.

The classic Jag remains original; nothing has been taken off or replaced. His father specced an aerial, side-mirrors, and the Jaguar badge on the bonnet but has not done any work to it since taking ownership of the vehicle. The car must remain in its original condition; not even the torn seats have been changed.

Having clearly established his love for all things E-Type, we exchanged notes on how we perceive our two cars to be. He’s driven all the vehicles Jaguar has on offer today, including the 2.0-litre F-Type I was testing. Though the sensation, performance and attention to detail is evident in the modern-day offering, nothing comes close to his E-Type. The smell of metal, feeling every mechanism of the car working beneath you, driving and being in union with it… I can understand why he has an unquenchable desire to get drive the car.

But don’t think that the E-Type is driven at every available opportunity. In 2018, it’s only been driven four times. Once very early the year, the second time when I saw him fill up the tank, the third time when he arrived for a photo and the fourth to meet me for a photoshoot. Rare? I think it just got a new definition.

Oh, and if you’re wondering if he'd part with his E-Type - unfortunately, that is not going to happen. Ever.

As a journalist one should be unbiased when it comes to sports cars - or test cars, for that matter. There should be no favourites and no preference given.

Having experienced several F-Types on test through the years and having driven most of the range, I can understand why this owner is so fond of his E-Type. There’s an unapologetic sense of pride when hopping behind the wheel.

German sports cars are great and they’re technically amazing but the F-Type still has that x-factor that differentiates it from its rivals.

It’s not the fastest but it is one of the most beautiful cars around. It does not have great practicality, but driving it is always an adventure. And I’d like to think that if my (future) wife should one day fall pregnant, perhaps I’ll also mark the occasion with a Jaguar F-Type.

We live in a world where facts and fiction get blurred
In times of uncertainty you need journalism you can trust. For 14 free days, you can have access to a world of in-depth analyses, investigative journalism, top opinions and a range of features. Journalism strengthens democracy. Invest in the future today. Thereafter you will be billed R75 per month. You can cancel anytime and if you cancel within 14 days you won't be billed.
Subscribe to News24
Related Links
Rare Jaguar E-Type sold for R1.7-million, part of incredible classic car auction
Next on Wheels24
EXPLAINER | What's the difference between a 4x4 and a 4x2 bakkie: Which one should you buy?