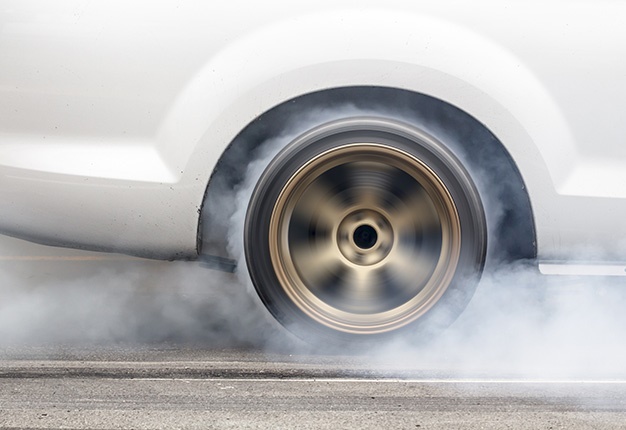 'Anyone can put their foot down and drive fast but keeping everything in line is a different kettle of fish if your car is not sufficiently equipped,' writes Robin Classen as he highlights the importance of tyre choice.

Tyres are often the most overlooked part on a car but its significance and safety aspect cannot be understated, especially on high performance cars.

It provides the grip and communication between car and road, working in tandem with the transmission and suspension to successfully get power to the ground.

What tyre you decide to fit also largely depends on the type of car you drive. Audi's performance S and RS range, as well as BMW's M division cars are such examples. These cars boast strong power ratings in stock trim and come out with a specific tyre. Fitting a lesser radial (read: smaller tyre) would drastically reduce the driveability and performance.

Do you consider brand names when fitting a tyre or the cheapest option? Email us

READ: 5 things you should know about tyres in SA

According to Dunlop, tyre age is measured from the date of manufacture, not of purchase. The lifespan of a tyre generally depends on how much you drive and also on how you drive. It's a fact that our roads aren't the best, with nasty potholes and loose debris being the main culprits in causing tyre damage.

Often referred to as a silent killer, wheel alignment is just as vital as choosing the correct set of tyres. It's name stems from the fact that you can run down a perfectly good tyre and not know it until you physically see it yourself. Drag racing is a sport in which you can spare no expense in terms of quality because there are so many components all moving at the same time.

What has become a repetitive trend I've seen over the years is people spending ludicrous amounts of time and money making their cars faster yet overlook the basic brake and suspension components that keep you planted on the tarmac. A tyre might be brand new but that doesn't mean its meant to bear the brunt of external modifications that make the wheels turn faster. The general perception is that there are people who think they know what they're doing just because a car is fitted with the latest modern technologies like DSG or 'paddleshift' transmissions, and electronic brake distribution. Fact is, anyone can put their foot down and drive fast, but keeping everything in line is a different kettle of fish altogether.

READ: What do the numbers on tyre sidewalls mean?

Goodyear, Dunlop and Toyo tyres are just some of the reputable brands on the local market and synonymous with various forms of motorsport. Even though they might cost substantially more than others, the bottom line here is you get what you pay for, and that is more often the big difference in terms of safety and performance. Because the majority of us don't partake in any form of racing, tyre choice is pretty much straightforward for the average driver. You won't be going anywhere fast in a Hyundai Grand i10 for example so pretty much any affordable and cost-effective radial brand like Sava or Sumitomo tyres is more than adequate.

The faster the car, the bigger and wider the wheel, so once you cross the 15" mark, tyres can become pricey. I know this because I fitted a set of WCI wheels to my 2007 VW Jetta and the salesperson that helped me asked if I was more of a 'speedster' or a 'drive slow, and stance' kind of guy. I fell into the latter category and I had wondered why he had asked. Simply put, he needed to know which tyre to supply me with as there are certain brands that don't react well to constant throttling, destroying tread patterns and creating a total imbalance for the duration of its fitment life.

I thought to myself it was just another oversized sales pitch to make me buy a more expensive set, but he suggested I take a cheaper option and I jokingly asked him why he wasn't offering me the more pricier selection. "Sir, people think that fitting a tyre is coming in and choosing what they like, but I try and suggest something that makes the whole car better."

I was shocked and both impressed at the same time because not a single outlet I visited gave me such insightful advice for something as mundane as fitting new tyres.

We live in a world where facts and fiction get blurred
In times of uncertainty you need journalism you can trust. For only R75 per month, you have access to a world of in-depth analyses, investigative journalism, top opinions and a range of features. Journalism strengthens democracy. Invest in the future today.
Subscribe to News24
Related Links
Need new tyres? Here's why it pays to shop around in SA
CAR DOCTOR: Should I buy a used Ford Ranger?
Next on Wheels24
Tips on how to navigate the roads during loadshedding