It's that time of the year when Mariah Carey and Michael Bublé songs come out of the woodwork, played in almost every mall to let you know its officially Christmas.

Red and White have long been the traditional colours of the festive season, although cupid and Valentines Day will have something to say about that.

To be considered as a 'Christmas car', it must either have a Red or White base colour while sections like, but not limited to, the roof and side mirrors must be coated in either combination. So aftermarket wraps and decals don't count.

Do you know of any other cars that would fit the bill on this list? Email us and let us know.

These days cars come out the factory with so many different body colours and combinations. With that said and in keeping with the festive spirit, here are a few examples that wouldn't look out of place in a driveway on Christmas Day:

What better way to transport all the presents and accommodate the family all while keeping with the festive theme in the two-tone Caravelle. Passengers can relax themselves on seven comfortable seats and appreciate the ample head and leg room on offer. Pricing for the sixth-generation 'Velle starts at R981 100, although you have to pay extra for the two-tone paintjob which is only available in Highline trim. It is no slouch either with 132kW and 400Nm coming from its 2.0-litre turbodiesel engine.

The Mini of all Mini's. The John Cooper Works version is not only a pocket rocket with 170kW and 320Nm on tap but it can be decorated in 'Chrismassy' colours as well. Customers can between a red body colour with matching roof and side mirrors or vice versa. 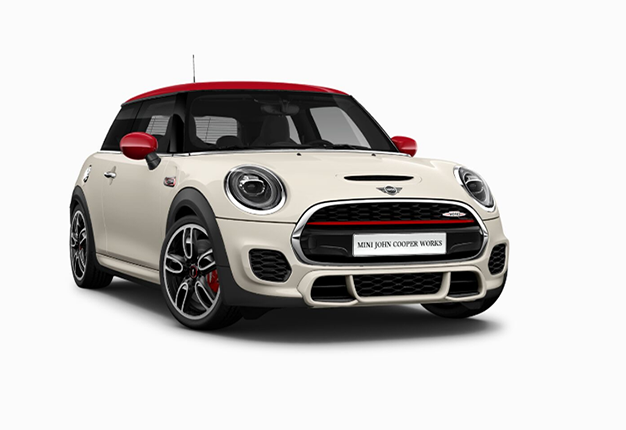 Whether you're running around for that last-minute piece of Gammon meat or don't want to miss the kiss under the mistletoe, it will certainly get you where you need to be in quick time. With a starting price tag of R535 980, you can make someone, or yourself, extremely happy this Christmas.

South Africa might not be getting this 156kW supercharged pocket rocket in the local market but it definitely fits the bill in terms of decorative livery with its combination of white, red and black - colours that are synonymous with Toyota's performance tuning arm Gazoo Racing Meisters of Nurburgring or GRMN.

It is only available in white, littered with detailed GRMN livery. Only three models made its way to SA, and hopefully some day, someone will be lucky enough to pick one up  - at a price of course.

Not all bad news though as there is a GR model available locally, albeit a bakkie, with the Hilux GR-Sport priced at R714 500.

Citroen made its re-introduction to the local market this year after a 3-year absence and with it came new models. The one in question here is the funky new C3. It has three colour options available - Polar White, Platinum grey or Soft Sand which can be paired with a Sport Red Roof. Its as if this car was made with Christmas in mind. The C3 is priced from R239 900 and makes use of a 1.2-litre engine that comes in 60- and 81kW form.

It's growling V8 is enough to make the Grinch come down from the mountains and just like the Mustang and Corvette, the Viper is pure bred American muscle to the core with its iconic bonnet to boot white pinstripes. It was never officially sold here but remained a modern option for those wanting something else other than a Ford for Chevrolet.

We live in a world where facts and fiction get blurred
In times of uncertainty you need journalism you can trust. For only R75 per month, you have access to a world of in-depth analyses, investigative journalism, top opinions and a range of features. Journalism strengthens democracy. Invest in the future today.
Subscribe to News24
Related Links
6 times the Kia Grand Sedona proved to be a fantastic people mover
Ubuntu Christmas Day 4 - Mudding a hut and how the Nissan X-Trail saved the day
Next on Wheels24
Car Doctor DIY | These stress-free tyre changing tips will turn anyone into a pro