• The 9N3 code name refers to the Polo model.

• The Polo and Polo Vivo are Volkswagen's current best-selling vehicles.

• It is available in both hatchback and sedan body shapes.

There have been numerous debates among car lovers whether the facelifted fourth-generation Polo, also referred to as the 9N3, is the exact same as its Vivo namesake.

Many saw it as a copycat move, but Volkswagen reaped the rewards by recycling an existing model with a near-identical one from a commercial perspective. The truth is, even though both 9N3 models use the same chassis, they aren't the same.

The original 9N or fourth-generation Polo was released in 2002 and midway during the noughties, VW launched a facelift or what most people refer to as the 9N3 shape. Facelifted 9N3 model was released from 2006 and ran up until 2009, until the 6R Polo came onto the scene the following year.

Volkswagen introduced the first Polo Vivo eleven years ago as a modern successor to the outgoing MK1 Golf in 2009. It has since been rebadged to roll out yet another Vivo derivative – as if SA roads aren't full of them already, but no one is really complaining.

Have we missed any other differences you might know of? Email us or share your thoughts in the comments section below.

Just like the Citi Golf, most body components are interchangeable with slight differences in design and also the engine applications used. This has also led to some people converting their older 9N3's to that of the newer 9N3 Vivo, but there will always be giveaway details upon closer inspection.

Both the Polo and Polo Vivo are still sold brand-new in South Africa with starting prices of R290 900 and R222 100, respectively, with the latest Polo also headed for local shores.

READ | Wolfsburg is the gift that keeps on giving: VW to unveil its new SA-bound Polo GTI in June

I used my parents' vehicles - my father's 2007 VW Polo sedan and my mother's 2012 VW Polo Vivo hatchback to highlight the aesthetic differences between the the two models.

Here are some of the aesthetic and interior differences to help you differentiate from a 9N3 Polo and Polo Vivo:

Front, side and rear inserts Both the 9N3 Polo hatchback and sedan comes from the factory with beading strips around the car. In front, they are positioned under the headlights. On the side, they run across all four doors and also along the rear bumpers.

The beading strips were only found on 9N/9N3 hatch and sedans and wasn't used again with later Polo models.

The 9N3 Vivo does not have this at all. Volkswagen went with a 'flushed' look to make it look different to the Polo version – obviously. This is perhaps the quickest way in which to distinguish between the two at a glance. What if someone applied body filler over the beading gaps or replaced the doors, front and rear bumper? There is another way to know if it's a Polo or Polo Vivo. The 9N3 Polo's front bumper follows a 'V' shape which runs from the grille with two separate plastic inserts on either side.

The opposing Vivo model features a singular bottom section that runs from headlight to headlight, eliminating the abovementioned 'V'. The foglight shape on the 9N3 Polo is round, whilst the Vivo's one is usually rectangular. Volkswagen had to make changes on the inside, albeit minor ones. Where the door unlock button is mounted on a section on the door handle on the 9N3 Polo, the Polo Vivo's one is positioned horizontally with the hazard button on the centre console on the dashboard.

Depending if its a Trend or Comfortline trim, the 9N3 Polo Vivo's electric window button sits on the same place where the 9N3 Polo's door lock and unlock button used to be. 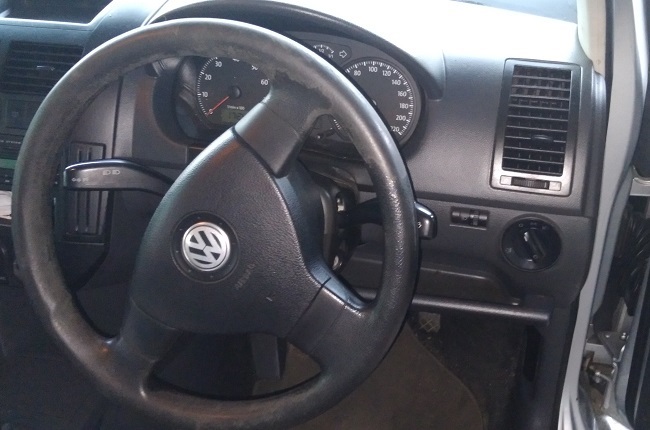 The 9N3 uses a more modern steering wheel, the very same one found in the Polo 6R. The 9N's came in two different designs for the respective facelift models - one with four and three arms.

The badges on the steering wheel also differ, with the one on the 9N3 Vivo being chrome-trimmed as opposed to a 'pasted' badge on the older, facelifted 9N.

The airbag spaces aren't interchangeable, so if you want to replace the steering wheel of either car, you'd need to buy both the steering and airbag. The biggest and most obvious difference between each model's side mirror is that the one does not have an integrated indicator light. The 9N3 Polo came out with this while the Vivo has its side indicator moved to the fender, next to both the passenger and driver doors.

The facelifted 9N3 Vivo also features the same side mirror as the 6R Polo. The 9N3 Polo has two cup holders positioned behind the handbrake, while the Vivo version has an extra one at the bottom of the centre console. The one in the normal Polo is used as an ashtray section that flips up when pressed down. Extra cupholder in the 9N3 Polo Vivo
Wheels24 Robin Classen
We live in a world where facts and fiction get blurred
In times of uncertainty you need journalism you can trust. For only R75 per month, you have access to a world of in-depth analyses, investigative journalism, top opinions and a range of features. Journalism strengthens democracy. Invest in the future today.
Subscribe to News24
Next on Wheels24
SEE | Three used car debunked myths you should know