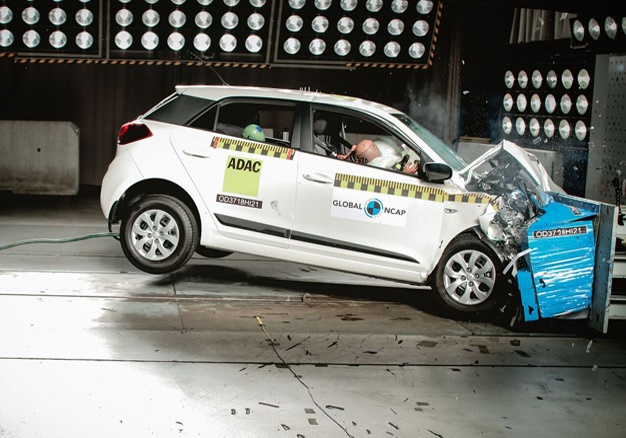 In 2017 Global NCAP and the Automobile Association of South Africa launched the #SaferCarsforAfrica campaign. Earlier in November, the two organisations launched the second part of their project.

The campaign coincides with the first independent crash tests of some of South Africa’s most popular compact cars.

According to organisers: "The crashworthiness results of the cars tested show a wide range of safety performance, from four to zero stars for adult protection, with the lowest ratings resulting in a high probability of life-threatening injury in a road crash."

The models tested in 2017 included South Africa’s best-selling car, the VW Polo Vivo, as well as the Datsun Go+, Toyota Etios, Renault Sandero, and Chery QQ3. Combined sales of these five cars account for around 65% of all the new cars sold in South Africa 2016, according to the AA.

This year, one of the models tested is the Hyundai i20 which achieved a three-star rating for adult occupant protection in the frontal crash test at 64km/h. The vehicle structure was rated as unstable as well as the footwell area.

The protection levels ranged from marginal to good in adult occupant protection.
The Hyundai i20 offers seatbelt pre-tensioners for both front passengers and seatbelt reminder for the driver.

Using the child seats recommended by Hyundai, the i20 achieved a two-star rating for child occupant protection explained by the limited protection offered to the "3-year-old" dummy and lack of Isofix anchorages.

The i20 structure is different from that of the European model. Safety equipment in South Africa does not offer Electronic Stability Control (ESC), side body airbags and side curtain airbags which are standard in Europe. We live in a world where facts and fiction get blurred
In times of uncertainty you need journalism you can trust. For only R75 per month, you have access to a world of in-depth analyses, investigative journalism, top opinions and a range of features. Journalism strengthens democracy. Invest in the future today.
Subscribe to News24
Related Links
Buying a car in SA: How important is vehicle safety to you?
Car-buying in SA: 75% of new buyers influenced by 'crash test results' - AA
Next on Wheels24
One grand difference - would you buy this range-topping hatchback or entry-level SUV?

Subscribe to newsletters
Lockdown For
DAYS
HRS
MINS
Brought to you by
Voting Booth
Which of these factors are prohibiting you from buying an electric vehicle as your next car?
Please select an option Oops! Something went wrong, please try again later.
Prices should be more affordable
16% - 214 votes
Our unreliable electricity source
10% - 130 votes
There's not enough charging infrastructure
10% - 137 votes
All of the above
64% - 871 votes
Previous Results
Car Doctor
Hold my ECU: Owners of tuned cars remove engine control units to prevent them...