• The Automobile Association (AA) is calling out authorities on the driving card system.

• Motorists are being severely fined for expired licences.

• The AA says the current system was broken even before the lockdown began.

For the past few months, thousands of motorists have been writing in to Wheels24 editor Janine Van der Post about endless battles trying to get online licence appointments to renew vehicle and driver's licence cards.

There's also been an outcry from motorists having to pay severe penalties for lockdown-expired licences, many of who fall between the national lockdown between 26 March and 31 May.

Van der Post says: "Motorists are also now soft-targets for traffic officials and are being severely fined for something which has been out of their control. The entire online booking system is flawed, and needs a drastic revamp for greater efficiency. It would also be a massive help if driver licence cards only needed to be renewed every 10 years, instead of every five."

Now, the Automobile Association (AA) is calling out authorities on the driving card system which needs a desperate change in operation.

The AA says a moratorium on fining motorists without renewed driving licences must be implemented as a matter of urgency, and that immediate steps be taken to fix the current renewal processes. 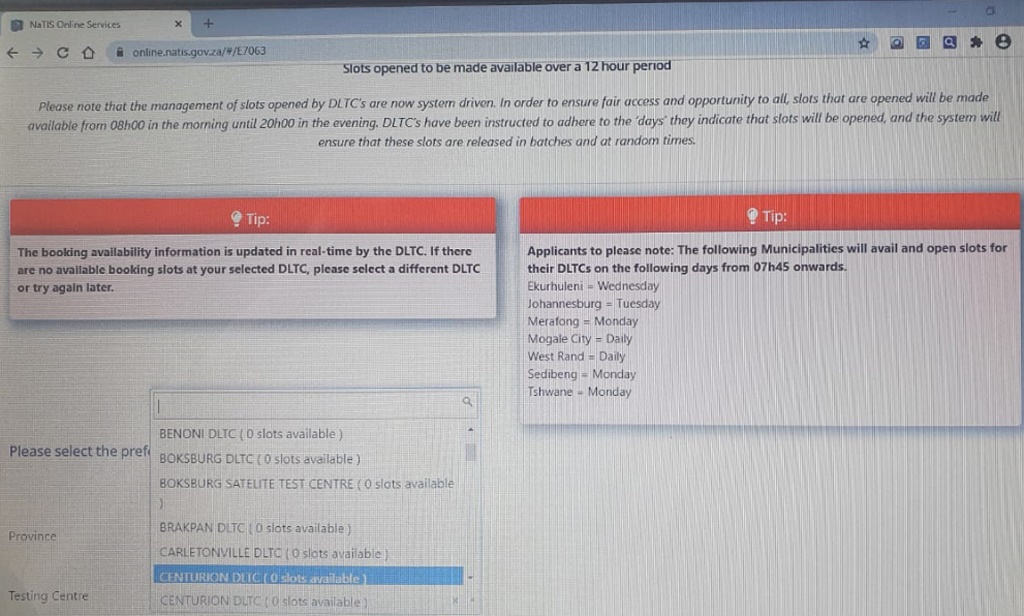 "The current system was broken even before the lockdown began.

"Now, with thousands of anxious motorists struggling to renew their driving licence cards for a variety of reasons, the failures of the system are being exposed even more. And, what is most concerning, is that there appears to be no acknowledgement of this by the authorities, nor of any attempts to assist the public.

"We must be honest and admit that the current processes are, quite simply, shambolic," says the AA.

The Association says of particular concern is that the already under-resourced and inadequately-staffed traffic law enforcement authorities are setting up roadblocks to ensnare motorists with expired driving licence cards and vehicle licence discs, even though they are aware that there are few avenues for motorists actually to renew these documents.

All the while, more severe violations are not being dealt with because traffic law enforcement officers are focussing on soft targets.

The AA says traffic policing must be about road safety and not revenue.

"It's an absurd situation where motorists cannot renew their discs or cards and are then stopped and fined for not having done so. It's not news to anyone that the online booking system is not functional, that Driving Licence Testing Centres (DLTCs) are open erratically and under-staffed, and that online networks at DLTCs are also often down, all of which result in motorists being unable to renew their cards.

"The only people who don't seem to acknowledge these issues are the authorities and it's the motorists who ultimately suffer," notes the AA. The Association says the vast majority of motorists in the country want to remain legally on the road and go to great lengths to get their driving licences renewed. But, it asks, what must motorists who rely on their vehicles to earn an income do if they aren't able to get these discs and cards renewed?

"Law-abiding citizens with no alternatives must continue using their vehicles to work and are then punished because of a problem they didn't cause, by the very authorities who did," says the AA.

In addition to placing the moratorium on fines, the AA says it has now become more than critical that alternatives to the current renewals processes are implemented.

"Not only must third-party agents such as the AA be allowed to renew driving licence cards, but the current system needs a dramatic overhaul, and quickly. There can be no doubt that the current way of doing business must change, and change now," the AA says.

The AA says calls by the Organisation Undoing Tax Abuse (OUTA) to extend the validity of driving licences from five to ten years makes sense provided motorists have their eyes tested by registered professionals at least every five years to ensure their vision is good enough to remain safe on the road.

It suggests that these eye tests are also carried by motorists and presented to authorities when asked to do so. But, the AA says, increasing the validity of licences from five to ten years must run parallel to ensuring the current system is improved and updated.

"Motorists must be able to easily renew their vehicle licence discs and driving licence cards, through a system which is responsive and available, and which actually works, concludes the AA.

We live in a world where facts and fiction get blurred
In times of uncertainty you need journalism you can trust. For 14 free days, you can have access to a world of in-depth analyses, investigative journalism, top opinions and a range of features. Journalism strengthens democracy. Invest in the future today. Thereafter you will be billed R75 per month. You can cancel anytime and if you cancel within 14 days you won't be billed.
Subscribe to News24
Related Links
Driving with J9 | Why motorists can't book an online licence appointment and what to do
If you have not renewed your expired vehicle licence, you're going to face hefty penalties
Next on Life
Large BMW M Performance Parts Race Series contingent will set 2023 rolling at Zwartkops